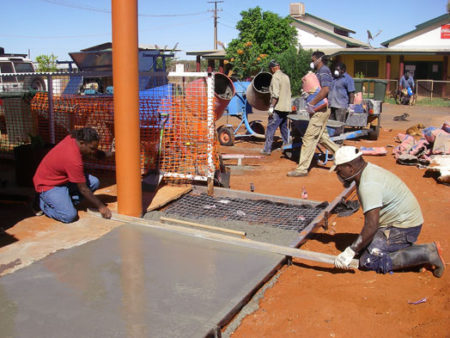 Part One in a series by ERWIN CHLANDA

Housing usually tops the list of Aboriginal disadvantage and it gobbles up much of the Closing the Gap government spending.

A few things stand out.

Firstly, the exorbitant cost of very basic dwellings. Example: A three bedroom house and two duplexes in Imanpa, on the road to Ayers Rock Resort and funded last year, will cost $1.6m.

Secondly, in many cases these are costs not linked to an open tender process but handouts to companies on the basis of their Aboriginal ownership or connections, sometimes through companies with an Aboriginal figurehead and formed for no other reason than to meet the government’s eligibility criteria.

This is the view of a long-time builder in Central Australia who spoke with the Alice Springs News on the condition of not being named. He says he suspects disclosing his identity may adversely affect his chances as a tenderer for other work.

He says contracts given under the Aboriginal Business Enterprises (ABEs) scheme are up to 25% more expensive than would be the case under open tenders.

In yet another example of the parallel universes in The Centre, such companies are getting the jobs under a system of “single select tenders” or select tenders involving a limited number of suppliers.

The builder says in a recent six months period two companies received about $12m worth of contracts for which mainstream companies were given no chance to bid.

And yet he says the benefits of the scheme go to people living in upmarket suburbs of Alice Springs and driving $80,000 4WDs, not the people on the ground in the remote communities.

Very little has been achieved over the years to establish permanent construction assets and skills in the bush.

The builder describes hapless initiatives such as linking a three-year Cert 3 Carpentry and Construction course to a seven months building project in a remote community.

Practical and feasible on-the-job training such as hanging a door or painting a wall, completed skills which people can re-use next time a housing project comes to town, are rare, he says.

Yet in his experience up to 70% of the workers on bush jobs could be Indigenous.

“Nothing much has changed in 20 years” with the widespread lack of basic school education at the core of the problem.

Most of the materials, machinery and crew usually have to be taken to the remote sites from Alice Springs.

The likely outcome is that the ABEs will never be competitive because they don’t have to be, an absurdity in a society that touts competitiveness as the key to development and progress.

This is how the government’s website about ABEs defines them: They are 50% or more Aboriginal-owned or controlled; and are operating as a business (including a company, incorporated association, trust, social enterprise, or registered charity operating a business).

An incorporated joint venture is one that is 25% or more Aboriginal-owned.

Local employment means employing Aboriginal people from the community where the work is happening, where possible.

A minimum of 40% Aboriginal employment is required for work under the program.

Some further examples of recent projects from which the mainstream construction industry in The Centre was excluded. All contracts are for “design, documentation and construction”:–


PHOTO: Not the norm: Aboriginal construction crew in a remote community. Photo from our archive.

NEXT WEEK: Where does the money go?