If Alice Springs wants to resurrect its tourism industry the town could do worse than reviving its Memorial Drive Cemetery.

It’s a who is who of the people who made and shaped the region, including the Connellan aviation family, painter Albert Namatjira, Bert Gardiner who had a taxi business in The Alice and who suggested to start tourism at Glen Helen, abandoned at the time by cattle man Bryan Bowman.

Olive Pink is interred there, so is Harold Lasseter, Bob Buck who found Lasseter in the cave, Ly Underdown who with his mother built the Alice Springs Hotel corner of Gregory Terrace and Hartley Street.

Also Tony Greatorex, who in 1965 was elected to the Legislative Assembly as the member for Stuart. He was at one stage elected as Mayor.

Jack Cotterill  and his wife Elsie built Wallara Ranch and opened up tourism to Kings Canyon in 1961.

There is an Afghan section and an Aboriginal one, unfathomably described as “non-denominational”.

In what is clearly not the proudest moment of the Town Council, which owns the graveyard, a conservation and management plan has been in the making for an astonishing seven years and is now finally open for public comment. 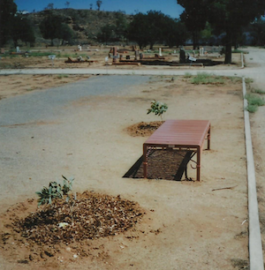 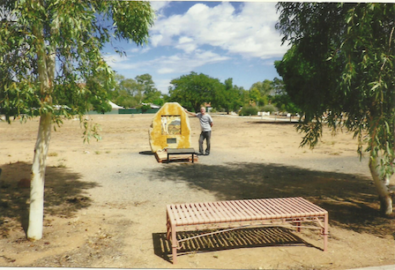 Amazingly, the plan recommends the undoing of work done by volunteers over the years, including the removal of these trees (pictured) at Namatjira’s grave which turned this barren spot into a friendly one: “Inappropriate recent plantings, such as the Olive trees, Kurrajongs and some native plants identified on the attached site plans, shall be subject to a staged removal programme that is co-ordinated with a new planting programme.”

So say the authors of the report, Dr Robin Gregory and Domenico Pecorari.

Why, asks Dave Mortimer, a member of the council’s Cemeteries Advisory Committee since August 2014.

Because the two ghost gums, planted by the Rotary Club of Alice Springs in 2004, do not fit into the cemetery’s history, according to Gregory and Pecorari.

The duo fell out of favour with the Advisory Committee in 2015 and the “the council works manager was to investigate different authors to write the plan,” says Mr Mortimer.

Despite a two-year search no-one could be found to take over and so discussions resumed with the duo which has been paid  $18,579 fee plus an additional $12,000.

“This prompted me to enquire if council had re-engaged Mr Pecorari and Ms Gregory to finalise the draft document,” says Mr Mortimer.

“The Director Technical Services confirmed that no, they have not been re-engaged.

“The minutes also record that council had requested the authors to make changes to some issues council had with the draft. The consultants refused to do. 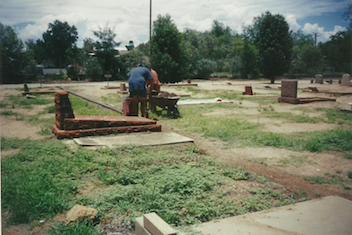 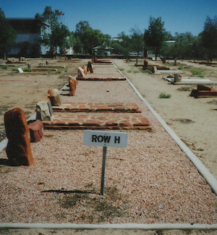 Before and after: Rotary Club of Alice Springs at work. But will is stay?

“The Heritage Council advised the Town Council that once the draft is finalised, to add a disclaimer in the foreword,” says Mr Mortimer.

The disclaimer as authored by council staff and the Mayor was added to the plan and is part of the final draft document approved by council for community consultation.

The disclaimer says: “The views and opinions expressed in this publication are those of the authors and do not necessarily reflect those of the Alice Springs Town Council.”

Says Mr Mortimer: “I am most unhappy with that, to put out a document for community consultation without declaring what policies the council would support or not support.

“In March this year I put to the full council that it should re-write the disclaimer, clearly defining what will be supported, or not be supported, in an honest and transparent manner, before the plan is considered to go out for community engagement.

“My request was not supported by council.

“There are some excellent policies within the draft plan which have been suggested many times by others, but have never seen the light of day.

“My fear is, with the way the disclaimer is worded, this will continue to be the case.”

Town Council CEO Robert Jennings wrote in reply to an invitation to comment: My apologies for the late response.  I was able to visit the cemetery late [last] week and now better understand the context and look forward to comments from the community.