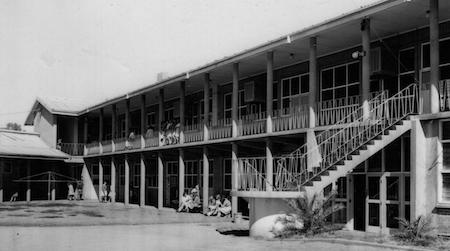 The Office of the Independent Commissioner Against Corruption (ICAC) has found the the Department of Infrastructure, Planning and Logistics (DIPL) announced a $2m tender to demolish the Anzac Hill High School despite a report that it was in “good condition” with “no sign of deterioration in any of the external walls, floors, pylons, or concrete stairs”.

The ICAC said in a media release today that the tender had been on the grounds that the “building structure is unsafe and is beyond economical repair”.

Commissioner Ken Fleming QC says in the media release that the ICAC “acknowledged that a heritage nomination over the Anzac Hill High School, and the proposed demolition of the site … were matters of public interest to the Alice Springs community”.

For that reason the matter had been given preference over other complaints before the ICAC.

Local historian and member of the Heritage Council, Alex Nelson, who had made the listing application and had initiated the improper conduct complaint, says he will now take the matter to the Civil and Administrative Appeals Tribunal.

The ICAC media release says: “The Anzac Hill High School is a valuable public asset and the NT Government had touted this site as the preferred location for its proposed National Aboriginal Art Gallery.”

In contradiction to the report, DIPL had announced the demolition on the grounds that the “building structure is unsafe and is beyond economical repair”.

Says the media release: “The ICAC found that a Beyond Economical Repair report was not commissioned to support the above description of the Anzac Hill High School’s condition and the decision to demolish it.

“The ICAC requested copies of any reports, notes or other documentation that referred to the condition of the Anzac Hill High School and the need to demolish the school.

“In a response to a request from the ICAC for information and documents, DIPL has made the following points:

• Cabinet made the decision to demolish the building in early December 2018, subject to the nomination for heritage listing.

• DIPL cannot comment on Cabinet’s decision for approval for demolition.

• Advice to Cabinet did not include detail on the current state or ongoing usefulness of existing facilities.

Says the media release: “The ICAC specifically asked for the information and advice (and copies of the same) regarding the condition of the school available to DIPL when it made a statement on 15 March 2019 that the ‘old Anzac Hill High School building structure is unsafe and is beyond economical repair’.

“The only documents produced at any time were two reports in respect of Hazardous Building Materials, a series of photographs, and a spreadsheet setting out some ongoing costs in respect of the buildings.

“The reply stated other matters such as:

• The buildings were not considered best use of the site ongoing.

• Technical officers had in-depth knowledge of the facility and considered it beyond economical repair.

• To upgrade the facility to today’s building standards ‘was considered cost prohibitive’.

Says the media release: “No detail on these matters was provided and no documents to substantiate the ‘beyond economical repair’ proposition were produced.

“It appears also that no such advice or details were provided to Cabinet.”