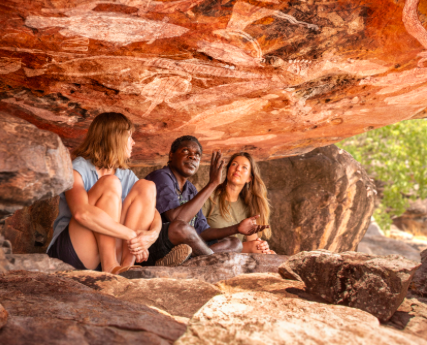 Brochures supporting the new tourism brand, “Different in every sense,” and the government’s Industry Strategy 2030, both still works in progress, are full of images of Indigenous persons, interacting with Asian or Caucasian persons who are clearly enjoying themselves immensely.

But, when this latest government initiative was introduced to the industry yesterday, where were the Aboriginal people themselves?

There were some 70 people in the room, but only one was Aboriginal, country music star Warren H Williams. (He said he may have spotted another.)

Mr Williams had not been invited: a friend had mentioned the presentation to him.

He spoke up at the meeting, making it it very clear that the government was out of order building Indigenous participation into their commercial strategies without the explicit participation of Aboriginal people: They should be in the room, was the point Mr Williams made – twice.

But Tourism Department Deputy Director Andrew Hopper made it clear that isn’t going to happen immediately but it would some time in the future, without saying when.

Another speaker said “market awareness” of Aboriginal people would be tackled at the end of this year.

Nevertheless, page 11 of the 20 page brochure passed around, with an Aboriginal person on the front cover, is devoted to “strengthen and showcase the Northern Territory’s distinctive Aboriginal cultural tourism experiences” and mentions the word “Aboriginal” 16 times.

At the presentation Tourism NT Executive General Manager Marketing, Tony Quarmby, made reference to the “65,000 year old culture” to which people would feel more connected to, and in tune with, once they visit the NT.

And of course Alice Springs will have a national Aboriginal art gallery, as Tourism Minister Lauren Moss told the meeting with remarkable confidence.

She reported that earlier in the day the industry had been given a briefing about the gallery’s business case. She described it as “comprehensive” although the document itself states it is anything but.

Fellow minister Dale Wakefield had only days ago described the recent Ernst and Young report as a “first step” and foreshadowed a further report would be needed.

Government officials underscored the need for a new brand by pointing to the changing global patterns in the tourism business.

The NT will be competing against a global spend on advertising of $465bn a year, some countries spending 20% of their budget on marketing.

Of course, it’s all targets at the moment, with “lower bound” and “upper bound” numbers aimed for under the new strategy.

Compared to other states, the NT has the second-largest percentage of holiday visitors (after Tasmania), the biggest percentage of business visitors and very few “visiting friends and relatives” – it’s just too far to go to see the rellies.

The presenters claim the work leading up to, and continuing, the new brand is the best effort of its kind ever: 4160 hours of work interviewing 551 people around the world.

This makes it odd that the new slogan is less than inspiring: “Different” after all can be both good and bad.

The News has asked about the cost to date for this effort.

No information was given at the briefing about the number of Aboriginal, if any, who had been consulted.

The brand, Mr Quarmby explained, is what the operators make it, within the framework of the themes set by Tourism NT.

The new brand is aligned with the Territory’s master brand – Boundless Possible – as well as with the brand of Tourism Australia.

“Tourism NT is happy to assist operators understand how their product fits in with the broader brand and key experiences,” says a pamphlet.

“A comprehensive communication guide is available … to help operators connect their product to the new brand.”

This crystallised with questions from Georgia Zadow, Director of Sales for the Mercure resort, formerly from Darwin and since half a year living in Alice Springs.

She asked what is the new brand going to do for us?

“We get the same questions from all areas,” said Mr Quarmby – which doesn’t immediately generate a lot of confidence for The Centre. He stressed that things will happen as “time and money allow”.

This is how it works, he explained: Create your own brand, point out what is different about your product, align it with our brand, use our tool kit but permit your images, texts and ideas to be part of “our marketing suite of assets”.

Another surprise: “Outback” isn’t exactly a no-no word now but it’s no longer part of the headlines. It is mentioned in the text. 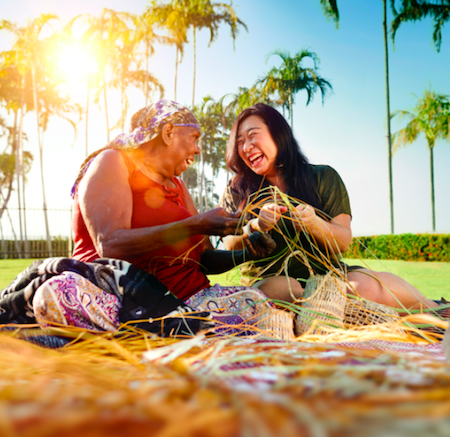 “As a result of what Tourism NT is doing, if you google ‘outback’ will you get Alice Springs?” the News asked.

Aren’t we going to mention outback any more? asked a man.

Don’t worry, we still own the outback, replied Mr Quarmby.

That is no doubt an issue which will raise its head plenty of times as the campaign aims to soften the image of the Territory.

“The domestic and international Tourism NT logo has also undergone a refresh following market research with feedback showing that the previous logo reflected the NT as being a rough, hot, harsh destination and the outback concept challenging for many international markets,” according to the brochure.
A Territory for softies? Surely not.

According to the department, expenditure to date on the development of the new brand was $800,000 for research, development, market testing and creative elements such as illustrations.