Above: Members of the public make their own silent declaration at last night’s council meeting.

A push to get the Town Council to acknowledge the climate emergency and develop a policy around it backfired last night.  Many more people than a fortnight ago filled the public gallery, in the end it was standing room only. T-shirts had been printed, speeches prepared, 17 people took to the microphone, a song was sung … and ground was lost.

A fortnight ago Councillor Jimmy Cocking had four votes in the bag for his motions to take the climate emergency declaration for debate  to the next meeting of the Local Government Association of the NT. The four were himself and Councillors Catherine Satour, Marli Banks and Eli Melky.

There has been a lot of solidarity between these four on council but last night Cr Melky broke from the ranks. His irritation with the “orchestrated event” by activists during public question time became evident not long into it unfolding.

Cr Cocking was in the chair and was happy for council to hear from people in the community backing his motion. However Cr Melky, who is generally a stickler for procedure, was not happy for this to be taking place with Cr Cocking in the chair, as it related to his motion. The speakers should be heard from in the next committee, which he, Cr Melky, would be chairing.

Cr Cocking acknowledged that the motion would be referred to that committee for debate. It would be inappropriate for him to be in the chair for debate of his own motion, he explained to the public, but  he allowed them to proceed. 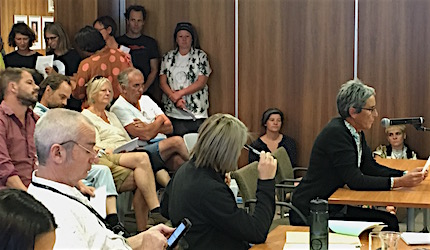 After the speech by the first speaker, Sue Fielding (pictured), and as the second, James Young, prepared to make his, Cr Melky pointed out that speakers needed to put a question for council to respond to.

Ms Fielding had called on council to bring forward its Climate Action Plan (on the books and funded to the tune of $250,000 per year over four years) in the form of a declaration of climate emergency, linking council and the town to a growing movement of especially local governments around Australia and the world. This, repeated by the majority if not all the speakers, actually went beyond what Cr Cocking was calling for. His motion did not refer to the movement.

Ms Fielding also gave examples of actions that such a declaration would involve, some of which are already being addressed by council, even if more could and no doubt should be done. These include recycling initiatives, investment in renewable technologies (extensive solar, an electric car), reducing emissions and energy use, local food production (through its support of the Community Garden) and protection of the water supply.

This lack of acknowledgement of what council is already doing got not only Cr Melky but other councillors, including the Mayor, off side.

Her question, which was taken up by most of the later speakers, responding to Cr Melky’s point about the necessity of a question, was simply, “Councillors, will you declare a state of climate emergency?”

It became clear in the later debate that the word ‘emergency’ – which was indeed the focus of Cr Cocking’s motion – was also acting like a red rag to a bull, as were references to anxieties and fears.

By the time the third speech, by Jennifer Taylor, had finished Cr Melky addressed the public directly, asking them to work within the guidelines of council’s meeting procedure, which would mean asking brief questions – he suggested no more than 60 seconds.  A lot of time taken up now would mean less time for debate by councillors later, he pointed out, with “no disrespect to your efforts and wishes”. 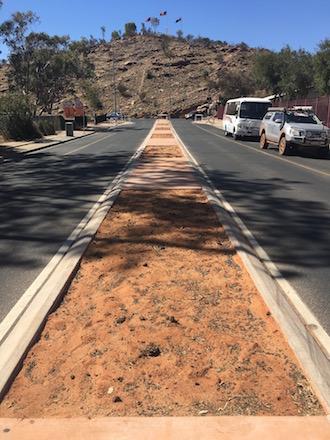 The following speakers did all keep it brief, but there were 14 of them, with one also speaking also on behalf of Caddie Brain, the organiser of a petition on this subject which has so far gathered around 1000 signatures.

Then came the finale, when Barb Molanus on the microphone led the gathering in a song, to the tune of “Shenandoah” with words adapted to their theme. Ms Molanus has a lovely voice, the melody is beautiful, the singing was heartfelt. A smile lingered on the lips of new council CEO Robert Jennings but the majority of councillors were stony-faced and Cr Melky made a last cranky comment to the chair.

Right: Calls by Cr de Brenni for more tree planting to respond to our warming town fall flat in face of council’s recent plantings in Bath Street, here, and Palm Circuit below.

The gallery then emptied and when the matter came up for debate, none of the activists were there to listen.

Cr Cocking spoke to his motion. A key point was that Alice Springs’ vulnerability represents also an opportunity, to demonstrate how to adapt to a warming world. But he, like many of the speakers, urged councillors to heed the science, and again, the implied climate science denialism on their part was not going down well.

Cr Banks spoke in support, but made the counter-intuitive point that an emergency did not “necessarily mean extreme measures”, it was just about “acknowledging” the  issue, concerning to many people, it didn’t have to “be dramatic”.

Deputy Mayor Matt Paterson pointed out, speaking against the motion, an emergency is dramatic and he was not comfortable with supporting anything with that word in its title.

He also referred to council’s actions in the field, including lobbying the NT Government on climate action, increasing awareness, supporting innovation, investing funds, lowering emissions. He  was concerned that Cr Cocking’s motion was just “a piece of paper”: “Nothing changes.”

Cr Jamie de Brenni similarly could not agree with the word ’emergency’. He could agree with “urgency” and for instance wanted some urgency brought to bear on the planting of 900 trees, involving children in the community, “teaching” them how to do it. 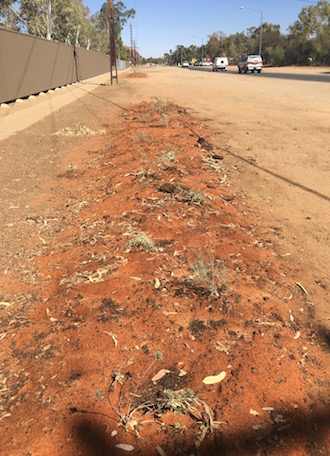 (This is not council’s strong suit at the present time, with a heavy death toll amongst recent plantings in both Bath Street and on Palm Circuit. Cr Banks later asked a question about the watering regime for the new beds on Palm Circuit; it was taken on notice.)

She preferred a more “level-headed” approach, “not whipped up into hysteria”, nor “using children to fight adult fights”.

Cr Banks countered that her colleagues’ arguments were running “the risk of climate denial”; the intention in using the word ‘emergency’ was to “give direction” to council and to respond to the “overwhelming concern” of the community.

Cr Cocking said accepting that an emergency exists would entail dealing with the situation now rather than in 10 years’ time or even later. He pointed to the inaction over 30 years by all levels of government, despite a 1989 policy discussion document by the Liberal and National Parties, which recognised global warming as human-induced and proposed taking a leading role, in Australia and the world, to shape policies that would minimise its impacts.

That this hadn’t translated into action, he later argued, was down to the political influence of fossil fuel companies.

In relation to council’s existing Climate Action Plan, he said it has good mitigating elements (aimed at lowering council’s carbon emissions, for example) but it has very little detail, if any, on how to adapt to the changes that are upon us – an “angry” last summer, an even worse one expected this year because of the lack of rain.

His motion was about council developing policy across the full range of council activities, with a focus on adaptation, how to better live in a hotter world: Alice Springs has an  “international reputation we can leverage”, “we could lead in that space”.

Cr Satour commended his “strong and brave motion”. She acknowledged the leadership council has shown to date but saw an opportunity to do more in becoming “part of a global movement”.

Mayor Damien Ryan encouraged Cr Cocking to meet with the meet with the CEO and develop a plan “with substance” that he could support. He then took aim at some of the presenters “telling us what we’re doing wrong”, including – a petty swipe – one who was drinking out of a plastic bottle. He also disparaged a council who has made a climate emergency declaration and since promoted a “no meat Monday” in their community.

Cr Cocking pointed out that his motion was about developing a policy, not a plan, but said he would take up the Mayor’s suggestion to meet with the CEO.

Then Cr Melky, from the chair, launched his attack not only on the motion but on Cr Cocking’s strategy. In an email to the draft motion he had apparently responded that it was  “excellent” but now he said that supporting it in its current form may be doing it a “disadvantage”.

With considerable condescension, he pointed out to Cr Cocking what he saw as relevant sections of the Local Government Act, nuances of definition,  and council’s record of action on the climate front in which he had long been involved.

The “orchestrated event” by members of the public had been “completely unhelpful”, in his view, in particular in their challenges to council’s leadership – “every one of us in this room stands up every day”.

He didn’t want to follow anyone else – referring to being part of the emergency declaration movement. As for Cr Cocking’s call to act as if our house is burning down (quoting Greta Thunberg’s now famous formulation), he likened his motion to a couple of water balloons rather than the big fire hose that would be necessary.

As if speaking to a school child, Cr Melky finished by telling Cr Cocking to “go and do your work” and bring back to council “an authentic motion”.

Cr Cocking took a breath. He agreed we need a fire hose, and council’s $250,000 a year action plan doesn’t quite cut it given the scale of the challenge. He wants to take action further, across the whole organisation. He reiterated that he will meet with the CEO about the issues and bring more information to council to support his motion at the end-of-month ordinary meeting, when it will be put to a formal vote.