Katherine residents keen to help saving the NT from fracking joined a week long pop up protest to “going slow against gas” this week.

According to a media release the action has been occurring up and down the Stuart Highway “as Territory families try to delay the movement of fracking machinery through their towns.

“Locals engaged in peaceful action by jumping in their vehicles prepared to crawl down the highway at a snail’s pace to slow the beginning of fracking in the NT,” the release says.

“But the action was stopped short by the fact the rig equipment was grounded at the weighbridge as the vehicles did not have the required heavy vehicle permits.”

The release quotes Lauren Kaiserman, a Katherine mother of three taking part in the convoy: “Just imagine the damage these heavy vehicles are doing to our town roads and highways, let alone the risk once they get on site and start fracking through our drinking water supplies.”

Another participant, Silvana Eggert-Goldbach, a 16 year old Katherine High student, is quoted as saying the action wants “to send a strong message to gas companies Santos and Origin that the community was still strongly opposed to fracking.

“If the Government doesn’t have the guts to stand up to protect our land, water and health from the gas multinationals, then community members have shown that they will,” Ms Eggert-Goldbach is quoted, clearly in the spirit of Swedish climate change activist Greta Thunberg, 16, now a world sensation.

“As a young Katherine resident I don’t want to inherit a fracked future. That’s why I’ll continue to join peaceful actions to slow down dangerous and unwanted fracking across the Territory.”

The action follows a weekend of similar go-slow convoys during which traditional owners from Elliott halted gas rigs from arriving at frack sites in the Daly Waters region for several hours, forcing Origin to relocate its work camp to its Hayfield site to avoid further disruptions. 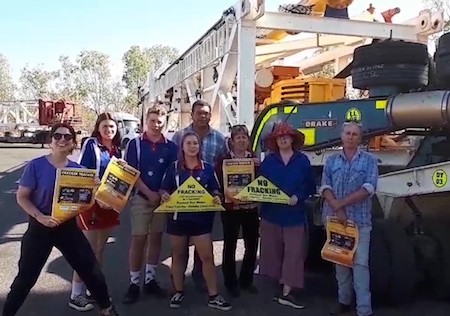 Dr Sam Phelan, a Katherine mother and veterinarian, is quoted in the release: “Two thirds of the Territory is living in drought.

“Our beautiful Roper River is expected to stop flowing this year after a series of poor wets.

“These companies are using and poisoning underground water that feeds the Roper River.

“As global climatic conditions worsen surely it would be sensible to wait to see what the next few wets bring. Is this weather an anomaly, or is it our future?”

Meanwhile NT Traditional owners are travelling thousands of kilometres “to bring a clear message to Sydney that Origin doesn’t have their consent to frack their land and open the largest new oil and gas reserve in Australia,” according to a media release from the Lock the Gate Alliance.

“The visit comes after Origin Energy kicked out traditional owners who attempted to attend the company’s fancy fracking meeting for businesses in Tennant Creek in July.

“The traditional owners had attempted to present a letter with more than 200 signatures in opposition to fracking, however Origin representatives refused to meet with them.”

Photos provided by the organisers.