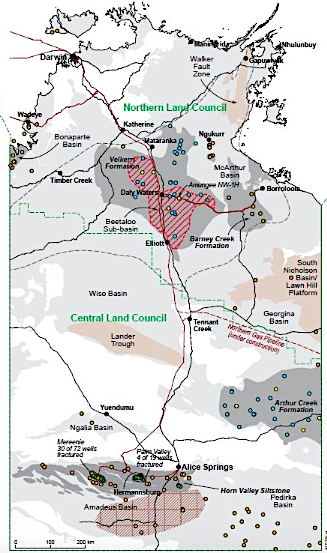 How much gas is in the Beetaloo Basin, which is at the centre of the bitter fracking debate in the Territory and apparently at the core of the Gunner government’s hope for Budget repair?

This question is being raised in a review by EnergyQuest’s analyst David Upton of Australia’s current and forward oil and gas exploration schedules.

The Beetaloo tests are “finally set to begin” writes Mr Upton, and high-impact conventional wells will be followed in the third and fourth quarter this year with “big budget drilling campaigns.

“While many more wells will be needed before a development decision can be made, the Origin and Santos wells, in 2019, will go a long way to establishing whether the hype about the Beetaloo is justified.”

Meanwhile among high-impact onshore wells in 2019 that will attract attention in the short term is Dukas-1 in the Amadeus Basin, near Alice Springs, which has a large, conventional [non-fracking] gas target, says the review.

Santos (70%) spudded Dukas-1 on April 16 as part of a farm-in agreement with Central Petroleum.

“The well is expected to reach its target, the pre-salt Heavitree Quartzite, before the end of June.

“Dukas-1 is targeting multi-Tcfs [trillion cubic feet] of gas with a potential bonus of helium.

“The Heavitree Quartzite hosts a proven petroleum system, but the key question is whether there was sufficient charge to fill the Dukas structure, which extends over 520 sqkm.”

In Beetaloo – between Elliott and Mataranka – Origin filed its environmental plan in early May to drill and fracture stimulate [frack] a well which will be its second horizontal well following one in 2016, completed just before the fracking moratorium.

“Origin will drill the new well vertically to a depth of 1875m before drilling horizontally through the liquids-rich Kyalla formation for a distance of up to 3,000m.

“The well will be fracture stimulated over up to 20 stages.

“These are no ordinary onshore wells. Falcon Oil and Gas disclosed last month as part of a US$9m capital raising that the gross estimated capital expenditure for stages two and three (a total of four wells drilled and fracture stimulated) was US$130m,” says the review.

“There is plenty of scepticism, due in part to disappointments with unconventional exploration in other Australian onshore basins.

“This includes the Cooper Basin, which was given a fair test by Beach Energy at the start of this decade, and at one stage had even attracted Chevron as a joint venture partner.

“The experts say the Beetaloo is different. In terms of geology, it most certainly is.

“The Velkerri B shale, which hosts the rocks behind Origin Energy’s 2C contingent resource of 6.6 Tcf (gross), is 1.4 billion years old.

“The shallower Kyalla formation, which is liquids rich and will be the target of Origin’s upcoming wells, is about 1.2 billion years old.

“Both formations are almost a billion years older than most of the world’s hydrocarbon-producing rocks.

“The exploration text books say the Beetaloo is too old to be worth exploring. Time works against preservation of hydrocarbon systems. And the further one goes back in the geological record, the less life existed on earth, which means less organic matter to create source rocks.

“Against the odds, the Velkerri rocks [in Beetaloo] not only contain organic-rich mudstones (ranging from about 4% to 8% total organic content), but the rocks have sat there largely undisturbed for more than a billion years and appear to be gas saturated.

“The mudstones were deposited in a marine environment a long way out from the coastline.

“The science on how the organic matter came to be there is still being debated, but it is thought that organic matter, derived from no more than bacteria and blue-green algae, grew in sunlit, shallow waters of an ancient ocean before dying and piling up on the ocean floor.

“The depositional environment also created some other key positives for today’s shale gas and liquid explorers.

“The Velkerri and, to a lesser extent the younger Kyalla formation are remarkably consistent across a vast area.

“The shales are also rich in microcrystalline quartz, which makes the Velkerri shales highly susceptible to fracture stimulation.

“In this respect, the Beetaloo is analogous to the Marcellus shale, which is among the most productive, low-cost shales of North America,” says the rewiew.

“The corporate stories behind exploration in the Beetaloo are almost as interesting as the geology.

“In the background, Santos geologists had worked out that the Beetaloo offered perhaps the best unconventional [fracking] opportunity in Australia.

“The company was keen to find a way in, but cash was tight as the business poured billions into Gladstone LNG.

“Working on a hunch that the true extent of the Beetaloo had yet to be defined, Santos commissioned a survey of the basement topography and discovered an even thicker sediment pile had been overlooked to the east of … what had previously been regarded as the core of the Beetaloo.”