Whenever you need a cop … there are three

The NT Government is announcing an initiative that “will work to deter crime and anti-social behaviour each night between 10pm and 5am.”

This is great news, except how come the announcement comes from the Families Minister, Dale Wakefield, and not from the Police Minister, Nicole Manison?

That is because Ms Wakefield is paying a private company, Talice Security, to provide a “security patrol service” at a time the Territory is reeling under its greatest financial crisis but has a police force that is well over twice the national average, measured by the number of cops per 100,000 people (see graph below).

“The security officers will connect with police each night for guidance on where to focus security patrols.”

This raises questions: The police will be involved anyway but does Ms Wakefield not trust them to do the job? Does she think they are not capable of it? Are they not?

On the matter of speaking an Aboriginal language, which language would that be? There are many spoken in our region.

All this calls for a sober assessment of our police force, the policies guiding it and the hysteria of the public discussion surrounding it.

“At a time when crime is at crisis levels, police are being asked to do more with less and deal with frontline cuts that will only make matters worse,” huffs Deputy Opposition Leader Lia Finocchiaro.

“The Gunner Labor Government has completely failed in its responsibility to keep Territorians safe. Police numbers are in danger of going backwards if recruiting is not implemented immediately.”

The fact is if we lost half our police numbers we would still have a lot more cops than the national average.

In the Southern Command the divergence is even greater. The command is made up (pretty well) of the three regional councils (Central Desert, pop 4000; MacDonnell, 7000; Barkly including Tennant Creek, 6500) and Alice Springs, 25,000.

Offences against the person: 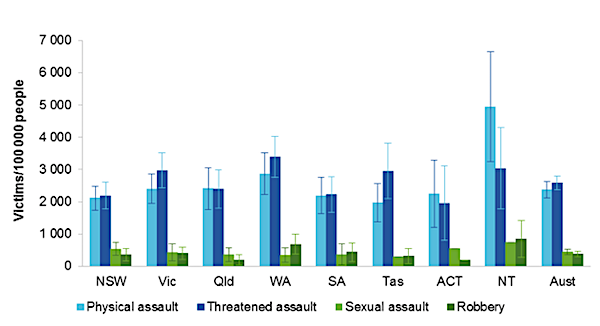 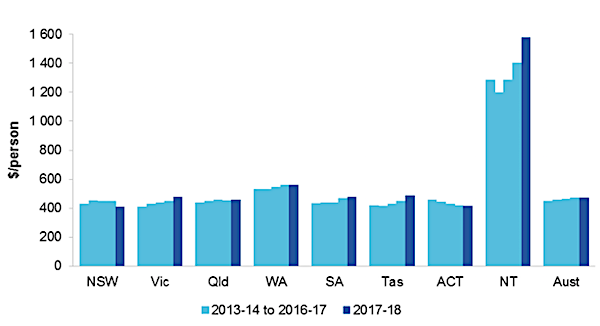 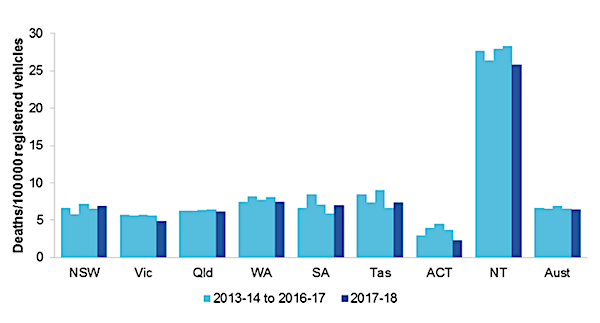 Whatever these statistics from the ABS Police Services – Report on Government Services 2019 tell the public, the police is clear about its future.

“The Northern Territory Police Force is on track to grow to a 1500-strong force by mid-2020 through continued recruitment,” says Deputy Commissioner Michael Murphy APM.

“We have recruited to date an additional 98 officers of the Government’s commitment of 120.

“In addition to the 120, 75 Police Auxiliary Liquor Inspectors will join the ranks to minimise alcohol related harm and increase compliance at alcohol points of sale.”

This month “21 Police Auxiliary Liquor Inspectors will graduate, with a further squad of 15 commencing.

“In March, 24 Police Auxiliaries graduated, with a further squad of 20 to commence in July.

“This month, 17 police constables will graduate and be stationed across the Northern Territory.

“Our 10-year average attrition rate for constables and above between 2008 and 2018 was 4.23%,” says Deputy Commissioner Murphy.

“Last year the attrition rate was the lowest in 10 years at 3.15%. The rate of attrition for this financial year to 30 April is 4.12% currently under the 10-year average.

“The Northern Territory Police Force remains an employer of choice and currently has over 440 applications to join the ranks, with 40 of those being police officers from other jurisdictions.”