Home Issue 12 Shoe on the other foot: caught in a foreign justice system
Issue 12Volume 25

Shoe on the other foot: caught in a foreign justice system 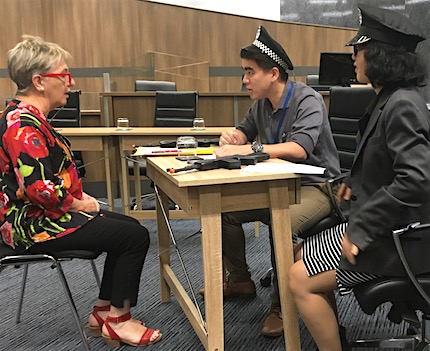 An Australian judge was arrested on the weekend for taking photographs in a prohibited area along the Chinese border.

Justice Judith Kelly was holidaying in China and had travelled to Dandong, which faces North Korea across the Yalu River. Ms Kelly is a judge with the Supreme Court of the Northern Territory. (She is pictured at right with her interrogators, Kwan Joo Lee and Lisa You).

Her outrage at being arrested and indignant insistence that she had done nothing wrong – “They were just holiday snaps!” – led to her also being charged with creating a public disturbance. Not that she understood any of this, as she does not speak Mandarin.

Her initial interrogation at the police station was also conducted in Mandarin. She offered to pay any fine involved to get the matter over and done with, but this was interpreted as an attempted bribe, only adding to the case against her.

Police thought her continued protestations of not understanding might be just a pretence, but after a while agreed to find an interpreter. Ms Kelly is a woman of European appearance and a European interpreter, Drina Jankovic, was available.

Ms Jankovic arrived with a flourish but Ms Kelly’s relief was short-lived: Ms Jankovic spoke Serbo-Croatian, not English, so she wasn’t much help!

Finally, an English-Mandarin interpreter, David Wang, was tracked down and Ms Kelly also received a phone call from the consulate, who had been contacted by her husband. The official’s advice was, “Whatever you do, don’t answer any questions.”

Too late! She had already got herself into a fine pickle.

No, this is not an April Fool’s story, one week too late. The comedy of misunderstandings did actually play out on the weekend (to great laughter), as part of the third Language and the Law Conference, held in Alice Springs for the first time.

In a jurisdiction where around 80 percent of matters before the court involve Aboriginal people, many of them speaking English as a second, third or fourth language, and some of them not all, it was not hard to see the points being made in this reverse role play.

One, they may not appreciate that a certain behaviour is illegal, or is illegal in certain places.

Two, they may not understand their legal rights once arrested, including the right to remain silent.

Three, the way they express themselves, both through body language and their use of English, may be misinterpreted and compound their legal problems.

Four, those interrogating them are likely to have, at best, only limited knowledge of their social reality, let alone language. “Aboriginal” simply doesn’t cover it, any more than “European” covered Ms Kelly’s situation. 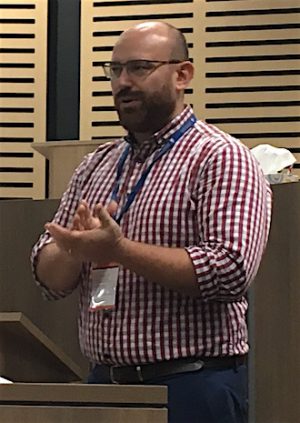 The Northern Territory, of course, has an interpreting and translation service but with multiple Indigenous languages spoken in the jurisdiction, as well as numerous other languages amongst recent migrant populations, its coverage is stretched and there are big cracks, if not yawning chasms, to fall through when it comes to understanding one another.

These go to more than having a working knowledge of the languages that the different parties speak in any given situation.

The conference heard from Ben Grimes (at right), a lawyer and linguist who specialises in communication issues in the legal system, about the significantly different ways people from different cultures can  tell the same story. The differences include how the story is constructed, who is important, what details stand out, where the emphasis falls, what is seen as relevant or irrelevant, and the order of events.

He gave an example from research conducted with primary school children in South Australia. The same story, “John Brown, Rose and the Midnight Cat” (by Jenny Wagner), was told to two groups, one Aboriginal, the other not.

In the story Rose is an old woman living alone, John Brown is her dog, who initially resists inviting the Midnight Cat into their household but, after Rose falls ill, relents. While the non-Aboriginal children received the ending as a happy one – Rose recovers and they all live to enjoy their new situation – the Aboriginal children were alarmed. From the start they were deeply concerned about the old woman: terrible events must have led to her living alone – what had happened to her family? The Midnight Cat was seen as a malevolent spirt and when John Brown let him in, that spelled Rose’s doom.

Mr Grimes also presented the results of his own research, which had given his presentation its title,  “Two languages walk into a bar and see a fight: differences in Aboriginal and Standard English narrative styles and implications for judges and juries.”

He had shown two short films of fights – one in a bar, between two patrons, the other on a bus, between a passenger and the driver – to two groups, one speaking Standard English and the other, speaking Yolngu Matha as their first language as well as Aboriginal English.

He then analysed and compared in detail the ways the two groups recounted what they had seen.

The points of difference were numerous. For one, the Standard English speakers were very aware of themselves as observers of the events, inserting themselves into the retelling, analysing their narrator’s position, whereas the Yolngu Aboriginal English speakers did not do this.

Mr Grimes suggested that juries would respond favourably to the analytical approach of the Standard English speakers; that the “wriggle room” introduced by the speakers qualifying their position, would have created an impression of greater objectivity.

The two groups also had quite different notions of ‘fight’ as a concept. For the Yolngu speakers, fight was seen as a disruption to social harmony, and they were more concerned with why it had happened. For the Standard English speakers, the concept was more legalistic, and their concern was with the precise detail of what had happened, rather than why.

The way the retelling was ordered was also distinct, with the Aboriginal English speakers ordering the narrative under headings to do with the behaviour, characterising it generally, before going into detail. The Standard English, in contrast, followed a chronology of events – this, then this, then this.

The Standard English narrative approach corresponds more closely to what the legal process is focussed on, the who did what and when, and, again, this is likely to be better received by juries, said Mr Grimes.

His recommendation was that directions for juries in relation to Aboriginal witnesses – developed in the Northern Territory by Justice Dean Mildren – be expanded to include narrative issues.

Above: Jennifer Baker as the prosecutor in the Yolngu court.

Juries would not be the only ones to benefit from a better understanding on this score. The narratives produced for the court start with the witness statements given to police and then are further constructed by the questioning from the prosecutor, leading the witness through that narrative, and by defence counsel in cross-examination. That’s a lot of filters for getting a story ‘straight’.

More points about what is lost in translation were made at the conference, during the trial in a Yolngu Matha court of one “Mr English” (Gavan Breen),  charged with “coming to our Country without our permission, causing loss of our languages and confusing our people.”

The confusion can start with what we might assume to be a simple question, translated as “Where are you from?”

The witness, “Oka” (Jodie Clarkson), answered by giving her current address. But in fact the Yolngu prosecutor wanted to know her birthplace, not where she was “stopping”.

The prosecutor singled out the troublesome apostrophe ’s’ as a subject for interrogation.

It’s used to express ownership: “The possessor noun gets the suffix ’s’,” explained Oka, (demonstrating strong grammatical knowledge for someone who speaks ‘Stralian).

The prosecutor came back, outlining the Yolgnu concept of ownership: “In Yolngu we don’t ‘own’ the land we ‘belong to’ the land. We come from the land and the land is us. Through our law and kinship we know who we look after and who looks after us. We stick together and we are a part of everything.”

“Why does English want to own everything?” she finished, “my car, my food, my bed-room?” 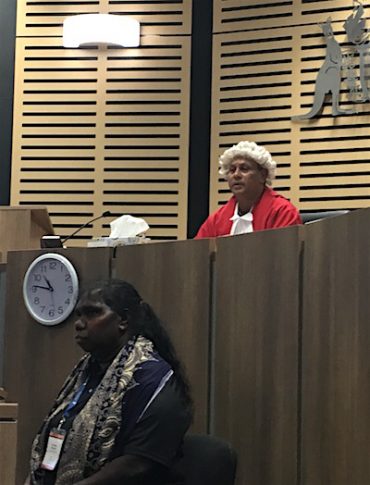 The defence counsel (played by Labi Gumbula) seemed to forget what side he was supposed to be on (and I take it, this was also a point being made), challenging Oka on the way English tells the time.
“Meridian time starts at the Greenwich Mean Line,” explained Oka, hitting an erudite stride. “We synchronise our clocks around the globe to that time line dependent on the rotation of the Earth and the position of the sun.”

Right: Derek Hunt as the judge; Bernadette Nethercott as the court orderly.

“Are you telling me that someone made a line in the ground on the other side of the world and that’s how they can tell what time we see on the white man’s message stick?” asked the defence counsel, holding up a mobile phone.

“Yep,” said Oka. And if her mobile was flat, it would be a matter of guessing.

The judge had heard enough: Mr English was found guilty of all charges. He was told to go easy on the apostrophe ’s’: “It’s not good to be greedy and selfish.”

And he was given a little lesson in time-telling, Yolgnu way: That big yellow thing in the sky called the sun “makes shadows on the land from sun up to sun down. Shadows they tell us exactly what time it is.”

He left the dock with a “six moon” suspended sentence hanging over his head.

This reverse role play was put on by staff of the Aboriginal Interpreter Service, for whom these issues are part of their daily professional dealings.


Note: The conference was organised by the Supreme Court of the Northern Territory in close co-operation with the Aboriginal Interpreter Service, the Interpreting and Translating Service NT, and the National Accreditation Authority for Translators and Interpreters.