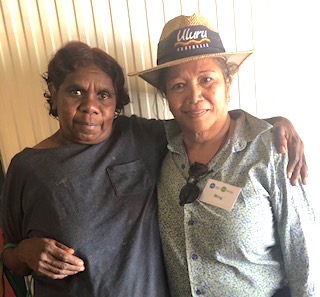 A woman employed by a taxpayer funded company providing services in some of The Centre’s most remote areas was “terminated whilst on sick leave and then sacked” when she complained about the firm’s failure to provide her with training in safe driving on bush roads.

Right: “Got lost finally found my way to the Aged Care Facility. Stressed out, comforted by Lorraine.”

Ming Lai says she had asked the STEPS Group Australia for three months to provide the driving training but she had been fobbed off by the local manager, Philip Allnutt, saying he’d  “blown the budget for the month”.

The News rang the CEO of the Queensland based company, Carmel Crouch, to offer her the right of reply, but she declined.

Ms Lai says she was required to travel on her own to places including Lajamanu – some 14 hours from Alice Springs. She declined.

She was given a 4WD vehicle to reach closer dirt road destinations but was not told how to put the car into 4WD, nor was she given any other bush driving training.

The News asked the best-known local instructor in bush road driving, Jol Fleming, of Direct 4WD, to comment generally on the need for dirt road training (not specifically on Ms Lai’s complaint).

He said special training is doubtlessly required unless it is a “manicured road with a clay cap, nice and smooth, no wrinkles.

“We don’t have any of these in The Centre.”

He says putting the car into 4WD on dirt roads, even if there is no risk of getting bogged, is advisable: “You have all four of them working.”

This would enhance safety 30% to 40% because it increases the directional stability of the vehicle.

“All the percenters add up,” Mr Fleming says. “Then there are preparation, tyre pressures and a string of others.”

Ms Lai said her satellite phone never worked although she had informed the manager numerous times: “He informed me that it was for emergency only, even then SOS didn’t work.

“His way of keeping in touch was to leave a message on my mobile phone which didn’t work either.

“I was never shown how to pump up the tyre, just told the gadget was in the car.

“I could not call for help either as there was no [phone] coverage. 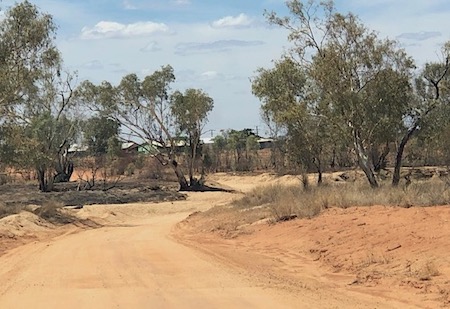 “A 20 Litre diesel [container] was placed behind driver’s seat.”

Ms Lai said she was threatened by STEPS for contacting the Alice Springs News Online under her confidentiality agreement with the company.

Left: “The road was rough and slippery. No signs of anyone for ages.”

It wrote to her that she “must not disclose Confidential Information … without the express prior written approval of STEPS”.

Ms Lai says she is not disclosing any “Confidential Information” as defined in the agreement.

“I simply want to make sure that no other workers are put into the position of fear, physical risk, stress and possibly loss of life I was put into.”