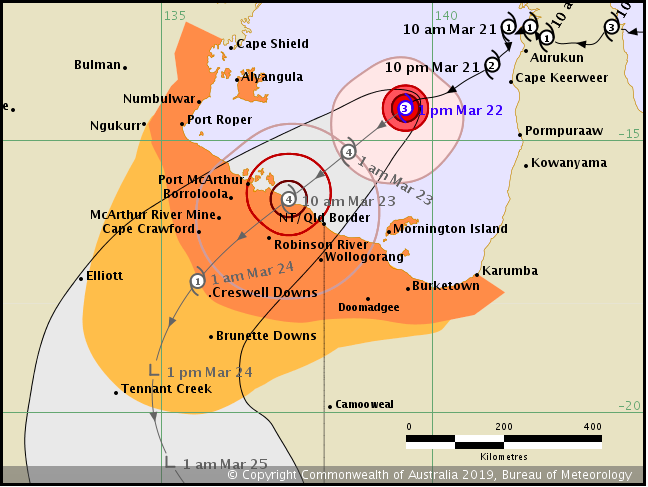 This image shows the progress of Cyclone Trevor with its location at 1pm today. The the following text was provided by the met bureau which is giving ongoing advice.

The bureau says the system is expected to remain at Tropical Cyclone strength for around 24 hours after it makes landfall on tomorrow, bringing heavy 24 hour rainfall and damaging winds as the system tracks inland on Sunday.

The Barkly region can expect widespread three-day rainfall totals of between 50mm and 100mm with damaging winds around the low with the peak in rainfall on Sunday.

Heavier falls in the 100mm to 200mm range, with isolated 300mm totals are forecast to extend around 250-300kms around the core of ex-Tropical Cyclone Trevor as it tracks southwest towards Tennant Creek (which is likely to see event total rainfall of between 80mm to 150mm), says the bureau.

A flood watch is current for the Carpentaria Coastal Rivers and Barkly region as the system will lead to significant stream rises and localised flooding – roads in the area may become unpassable and communities isolated as a result.

At this stage the bureau is making no predictions for Alice Springs specifically.

The gap between activists and those they are speaking for