Home Issue 10 Ways of being: beyond the beauty of Papunya paintings
Issue 10Issue 11Issue 12Volume 25

Ways of being: beyond the beauty of Papunya paintings

“You look at all these paintings, can I just quickly ask you, what do you see?”

For a few moments Ned Hargraves Jampijinpa took over the Q&A held at the opening last Saturday of Tjungunutja, the home-coming exhibition of over 80 early Papunya paintings not seen in central Australia for decades.

In a ringing voice – no need for a microphone – Mr Hargraves asked the fundamental question around which artists, curators and viewers come together.

“Yes! I was going to say story,” he responded. But it was more than that:

“What it tells to us is so extremely, extremely important to us, it’s also (and here he clapped his hands in rapid succession) walya, our ground, also jukurrpa, our law.

“Every one of these paintings you see today, it tells us something very special, it tells us that I am, I am in those jukurrpa …” 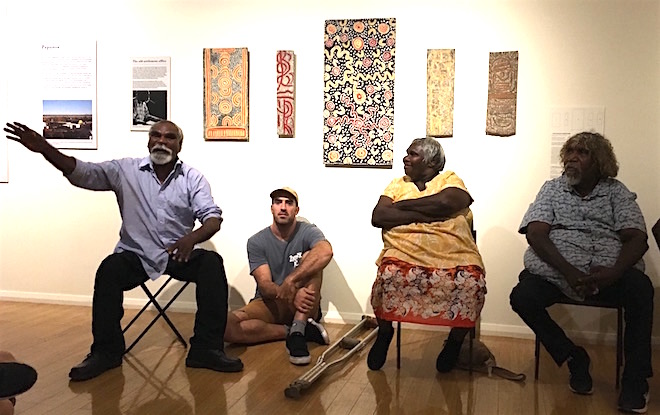 Above, from left,  Ned Hargraves Jampijinpa, unknown, Punata Stockman Nungurrayi (an artist in her own right and daughter of Billy Stockman Tjapaltjarri), and Bobby West Tjupurrula, one of the exhibition curators, during last Saturday’s Q&A.

Mr Hargraves was not officially on the panel but his intervention managed to capture the excitement of the occasion and to summon its significance – what it had meant in the beginning for these works to be made, and what it continues to mean.

The artists – men whose lives in so many ways were under the thumb of Native Affairs, “our boss”, as Michael Nelson puts it in the exhibition’s film – found the means to assert a profound expression of who they were in their own terms and sent this out into the world.

It would be difficult to overstate the impact that they had. The flame was lit for the outpouring of cultural work from the deserts, in visual form in particular, that is ongoing. We need look no further  for evidence of its vitality and reach than through the open doors in the Araluen galleries to the Weapons for the soldier exhibition (although we need to remind ourselves also of the huge contribution of Aboriginal women artists, among them the descendants of this “first generation” of men at Papunya). 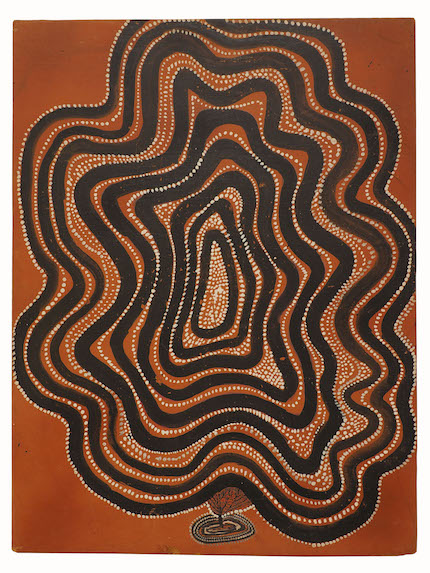 This work over decades – almost half a century now – has opened the eyes of other Australians to what is meant by Aboriginal belonging, giving them a glimpse of its depth and breadth and dynamism.

An image in the exhibition, Mick Namarari’s The desert oak, 1972 (at left), shows a tiny tree rooted in the ground, and billowing from it a form like a vast sinuous cloud, containing within it contour upon contour of its rippling self. The work was found without documentation, the interpretive notes explain, while suggesting, on the basis of other works by the artist, that the sinuous lines refer to the ancestral kuniya (snake). Even as I read this, I found myself projecting onto the image a symbolic expression of what the Papunya painters had achieved: their work as the ground and the tree, and its extraordinary impact, as the billowing form.

But what of the story now, on the ground in the shade of that tree, across the Western Desert where the stories and ancestral beings depicted in these paintings are alive in the country, where the artists’ children, grandchildren, great-grandchildren live, speak their languages, and carry with them their illustrious forebears’ legacy?

Desmond Phillipus is the son of Long Jack Phillipus, a first generation painter who is still alive, albeit a frail old man now, and who contributed to the show’s curation. At the Q&A  Desmond Phillipus, speaking in his first language, wanted to make a point. John Kean, facilitating, gave a paraphrased translation: All these old men were first and foremost family men who looked after their families, their culture, and after that they were painters and any other job that they had.

The remarkable film that accompanies the exhibition fills out this picture.

The original intent for the film, as I understand it from my earlier interviews with the curators, was to have it screened within the exhibition, so that its soundscape and the words of the artists’ relatives, in their desert languages, could be heard as you looked at the paintings. I believe this was the case for the first iteration of the exhibition at MAGNT in Darwin, the underlying message being that this is their story to tell, distinguishing it from most accounts of the movement, whether in exhibitions or books. At Araluen, perhaps because of the size and configuration of the galleries, the film is presented separately; after watching it, you have to bring it imaginatively with you into the gallery.

The film accomplishes many things. It is anchored by the stories told by the artists’ relatives. As they speak of their memories of mostly fathers and uncles, sometimes husbands and brothers, we see at grand scale the country of the stories (dreamings) they painted, we see their descendants walking that country, we see up close its textures, exquisite images of grasses and other plants, often stirred by wind, a cleft holding life-giving water, and another kind of life, transmitted through hands laid on sacred rock. A compelling selection of photographs is judiciously edited into the film: wonderful portraits of the artists, and archival photographs showing life at Papunya in those years, and the escapes from it, the “picnics” – that word is used – where the family groups hunted and gathered bush foods, and a men’s camp (photographed by Llewellyn Parlette, an American anthropology student who did his Masters research in Papunya from June to October in 1972) .

What I particularly appreciate about the film, apart from its beauty, is the space it allows for painful or difficult memories to stand alongside the more straightforward informational and affectionate ones.

It is fascinating to hear from Bob Dixon Kantawara about the expanse of country, from Papunya through to Utopia, covered by the warumpi (honey ant) story that his father Mick Wallangkarri Tjakamarra painted; and poignant to hear him say, and repeat, how much he misses him.

There are intimate memories, of the light-hearted kind, for instance, of Shorty Lungkata, as told by his daughter Wentjiya Morgan, hunting to feed his family, a “hero”, and them all feeling happy and so full that they went to sleep.

Then there are also intimate memories of another order, as told by Morris Jackson of his father Uta Uta Tjangala, who would whack him with a woomera if he caught him missing school; and by Elizabeth Marks Namarari of her husband Mick Namarari, who would go after her with a boomerang when she ran away as his young, promised wife, until she got used to him: “That’s the law for our mob,” she says. “That’s how I became a wife.”

There are several stories told about the brilliantly talented Johnny Warangkula, including by his son Dennis Nelson, who also spoke at the Q&A, in both instances emphasising the experience of having watched the old people painting and learning from that: “I carry on … I’m still working,” he said at the Q&A, with justifiable pride. The story from Johnny Warangkula’s daughter Candy Nelson, an accomplished artist painting today for Papunya Tjupi, is more painful: she tells how she and her siblings were left by their parents in the care of their older sister Narlie; how her dad was gone for a long time and didn’t come back until he was sick and blind.

Above: still from the film, Jeffrey Zimran Tjangala walking in his country.

At more than one reprise in the film, we meet Jeffrey Zimran, who is also credited as assisting in its making. He is the nephew of the artist Ronnie Tjampitjinpa who is still alive and speaks for himself on camera. In one sequence we see Jeffrey walking alone in his country, his voice-over telling us how closely at times like this he feels the presence of his ancestors. In other sequences he is with younger family members, children, including a babe in arms. A teenage girl, her hair dyed an electric red, digs for maku (witchetty grubs) in the time-honoured way. There is a slight reverberation in the sound during this sequence, evoking the many generations standing behind the knowledge of how this done, the kind of knowledge that allowed desert Aboriginal peoples to make this magnificent place their home.

Going into the exhibition of the paintings in the thrall of the film makes for a rich viewing experience.

The exhibition, presented by Museum and Art Gallery of the Northern Territory and the Araluen Arts Centre, has been curated by Luke Scholes, MAGNT curator of Aboriginal art, with Long Jack Phillipus Tjakamarra, Michael Nelson Jagamarra AM, Bobby West Tjupurrula, Joseph Jurrah Tjapaltjarri, and Kumantjayi Anderson.

With the exception of Hegedis, this assembly of talent and vision is entirely central Australian, as of course were the artists they honour.

Both the film and the exhibition have won awards: David Nixon as designer of the film, won “Best in show – multimedia” at the Museums Australia Publication Design Awards 2018; and the exhibition was winner in its category (Indigenous Project or Keeping Place, Level 4, project budget more than $500,000) at the 2018 Museums & Galleries National Awards.

Below: still from the film. This is the Ngintaka  (lizard) dreaming country of George Tjangala. The dark shape in the rock is a cleft holding water from which the men are gong to drink.

Birth of an art movement: the untold story