And now, the Stuart Highway by scooter 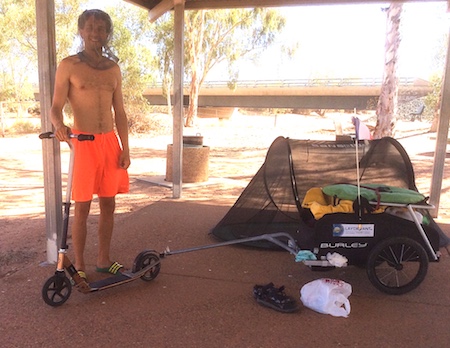 The truckies call him Scooter Boy and the odd grey nomads on the Stuart Highway in their air-conditioned 4WDs are scratching their heads: Frenchman Charly Guyetand is on his way from Adelaide to Darwin – on a kid’s scooter, in temperatures around 40 degrees.

He is towing what must be the lightest camping trailer in captivity.

British tourist David Sheppard encountered him at the bridge over the Finke (pictured) yesterday and took these photos.

The 29 year old out-of-work actor from the area between Lyon and Geneva has quite a history of adventurous challenges, says Mr Sheppard: “The local truck drivers help out with a few luxury items like water.

“He does between 30 and 50 kilometres a day, depending on heat.

“We helped him out to some cheese and English corned beef and of course water. He likes Vegemite. 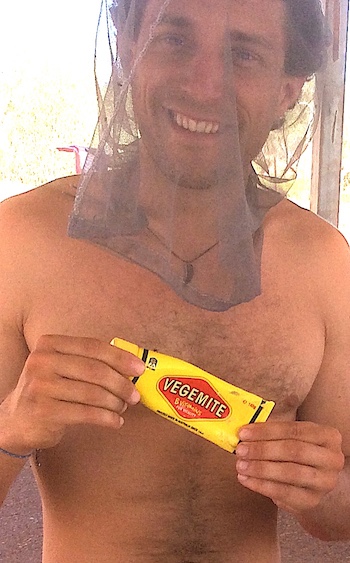 “Brendan Heenan at the Big 4 caravan park in Alice Springs said he would give him the freedom of the park to gird himself up for the next leg,” says Mr Sheppard.

“I think there should be a civic reception no less. Any restaurants here under French ownership should toast his Gaelic spunk.”

Guyetand is undertaking this arduous feat for the Swiss charity, Running Together.