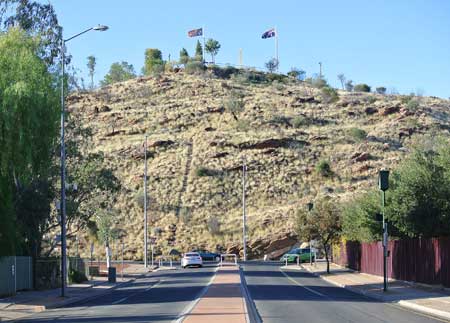 A concrete median strip, where no-one walks or waits, will get top priority for planting shade trees if Mayor Damien Ryan gets his way.

The median strip runs down the middle of Bath Street between Parsons Street and Wills Terrace for about 180 metres.

It was constructed in 2009, during Mayor Ryan’s first term in office. He is the only member of council who is still sitting from that time.

This is not a high traffic area, except in the mornings and afternoons at Our Lady of the Sacred Heat school drop-off and pickup times, and to a lesser extent on Sundays with the Anglican church in the locale.

The concrete strip  and bitumen either side gets “red hot”, said the Mayor when he first floated the idea in the committees meeting a fortnight ago.

He wanted to put in mature drought hardy trees. He even had a species in mind, Celtis australis, which despite its name is not a native to Australia.

The tree-planting budget is underspent, in his calculation by some $100,000: “If we budgeted for it, we should look at spending it.”

He said straight up the median strip is “not somewhere people are going to sit underneath”; the idea was to “take some of the heat out of the CBD”.

This has been the subject of study by the NT Government. There exists a heat map, which shows the hot spots around town.

Attempts by Councillors Jimmy Cocking and Marli Banks to take advantage of that knowledge and see whether the Bath Street median strip is the really the priority spot for heat mitigation in the CBD fell on deaf ears.

Cr Cocking also wanted to look at the idea in the context of a more strategic approach to tree planting broadly, including keeping alive the ones that are already in the ground.

Council is committed currently to planting 750 trees per year, but there is no “reporting mechanism” on that, he told the committees meeting. 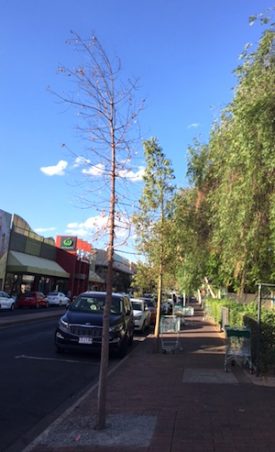 The issue needs to be addressed across the entire town, he argued, including doing something about the mature trees that have died in the intense heat of this summer. He had counted some 15 to 20, mentioning trees in the mall, on the Northside, and around the basketball courts.

Council needed to “some assessment” of this.

And would the cost of removing those trees come out of the tree-planting budget line, he wanted to know.

Deputy Mayor Matt Paterson suggested that that would be “absolutely overloading our officers” . The Mayor’s proposal was a “fantastic place to start”, once a report from the director was to hand.

Cr Banks argued that the report should weigh up areas across CBD and the different options of heat mitigation, looking at whether trees were the most appropriate heat mitigation strategy for particular locations.

Cr Eli Melky was supportive in principle of the Mayor’s tree-planting idea, but not of his approach to the budget. A reported surplus now would not necessarily be an actual surplus at the end of the budget process, which isn’t finally known until October.

Cr Jamie de Brenni saw no reason to wait: “The economy of Alice Springs is reliant on us spending our budget,” he told the committees meeting and this was “one of most proactive ideas we’ve had in a long time.”

This seemed to bring Cr Melky around: by looking at the variance between reported surplus and actual surplus last year, council could have a clearer idea of the money available.

Cr Glen Auricht in the chair of the committees meeting, somehow summed up this discussion as “we are all agreed this a very good project to move with” and “it’s got the support of the whole group”.  Once they had the financial information, they could “hand it over” to the Director of Technical Services.

Cr Banks did her best to make the case for her dissenting view and brought it up again in last night’s ordinary meeting: council knows the NT Government has a heat map report that identifies high heat areas across CBD, wouldn’t it be valuable before it spends money planting expensive mature trees to look at the whole picture. (Cr Melky said, from memory, that the cost per mature tree would be $7000 to $8000.)

Cr Banks wanted the recommendation before council to be specific about using the heat map.

Cr Cocking agreed: council could end up doing a trial down Bath St, but he wanted to make sure it was done in a strategic way.

Mayor Ryan, however, would not brook any changes and he had the support of Crs Auricht, de Brenni, Paterson and Jacinta Price, who was attending the meeting by phone. Cr de Brenni called for a division and this was the predictable split.

The resolution itself doesn’t specify Bath Street: “That the Director Technical Services provide a report to Council in regard to shading streets with trees, for heat mitigation, in consultation with the Acting Director Finance to determine an appropriate budget line.”

However, if the report confirms there is money available, Bath Street will be the go, as that was the mood of the chamber: It would be a “public display of council providing heat mitigation and a shady street”, said Cr Auricht, and the view  of the strip from Anzac Hill “would be amazing”, according to Cr de Brenni.