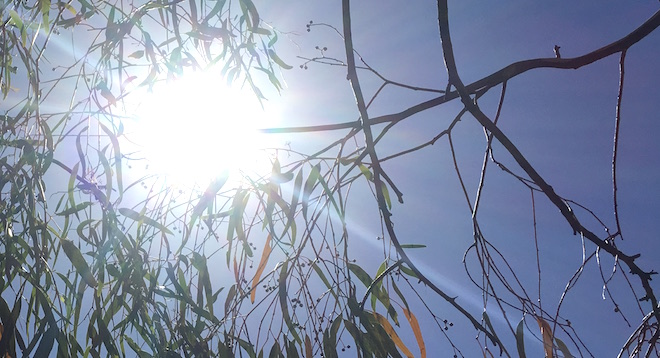 Councillor Jimmy Cocking wants the Town Council to get on the front foot in dealing with heatwaves, and not wait for the NT Government.

After winning support a fortnight ago for his motion to take the issue to the upcoming meeting of the Local Government Association of the NT (LGANT), at last night’s ordinary council meeting he put forward a five-part motion, seconded by Cr Eli Melky, for council action in “reducing the risks of heatwaves on residents and visitors to Alice Springs and Central Australia”.

“Alice Springs is on the frontline of global warming as we all have felt this summer,” he said. “Many suffered loudly on social media, many others suffered quietly, without access to internet or air conditioning. The community and visitors to Alice Springs will benefit from action taken to reduce the risk to life from increasing intensity and duration of heatwaves as predicted with high degrees of certainty.”

He noted “anecdotally” that in the heatwave this summer, the temperatures experienced hit levels predicted back in 2004 to be reached by 2030: over 94 days over 35 degrees and 45 days over 40. (ED – See note at bottom.)

“We need to deal with this as an emergency.”

His five-point proposal was that council:

1  write to the Minister for Health and the Minister for Police Fire and Emergency Services to request the development of a heatwave emergency management plan for Alice Springs and surrounding regions dependent on services located in the town.

2  review its operations during heatwave conditions with an aim to reduce the risk to staff, residents and visitors to Alice Springs.

3  assess its vulnerability to sustained heatwaves including street tree health, council owned infrastructure and liability for failing to act to reduce known risk to likely hazards.

5  work with Central Australian Health Service and the Department of the Chief Minister to develop a public warning system that will communicate to the public the risk of heatwaves and provide key safety advice to the general public on such days.

Opposition came from Cr Jamie de Brenni – that council was already active in all these operational areas – and Cr Auricht – that the matters are well addressed by work place health and safety plans, council’s as well as in private enterprise. In their view, no motions were needed.

On this point, Cr Melky pointed out that the motions were concerned not only with staff but with all residents and visitors to town.

Cr Auricht also noted that council has been involved in a lot of meetings with the NT Government about “cooling Alice Springs”.

Cr Cocking acknowledged that, but said the work has been done through the CBD revitalisation process and is limited to a “one off bucket of money”.

Deputy Mayor Matt Paterson thought it would be best to wait and see what the LGANT response is to council’s motion from a fortnight ago. He also said that the issue is in “our strategic risk register” and is already being reviewed. He would not support the motions. 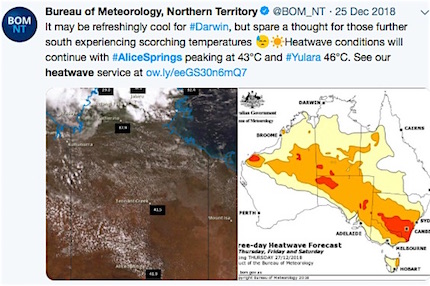 Mayor Damien Ryan injected his own heat into the chamber, suggesting that it was “a bit hysterical” for Cr Cocking to say that council would be “starting” something with these initiatives when council had already started with its work on its strategic plan and climate action plan.

Right: BOM’s sympathetic tweet on a torrid Christmas Day for Alice and Yulara.

Heatwave conditions were something this community had faced over a long period of time, he said.

He was against refrigerated bubblers: “If you speak to old bushmen, drinking cold water is the worst thing to do.”

There was nothing new in the motions and he was not  ready to support them apart from working on some items in the budget process.

Council’s staff were well looked after by the “very good” HR department, he said.

Oh, and on street tree health, he reminded Cr Cocking that there had been no support in chamber in last meeting to do an audit on street trees.

Cr Marli Banks was disappointed that Cr Cocking’s motion was being labelled “hysterical”. She found his arguments convincing and wanted the chamber to have a “productive conversation” and to “look at ways to work together”.

CEO Rex Mooney  said that aspects of Cr Cocking’s proposals were touched on in council’s disaster plan but heatwaves were not addressed in “any significant way”. He wanted the opportunity to report back to council on what was already being done in each of the five areas addressed by Cr Cocking’s motion.

With defeat of the motion looking absolutely clear – Cr Jacinta Price, at the end of a terrible phone line, had also said she couldn’t support it – Cr Cocking amended it to having the CEO produce a report. This was supported.

This keeps the issue on the table, so watch this space.

Note: At Alice Springs Airport since 1 December up to and including 25 February, there have been 72 days above 35.0C and 43 days above 40.0C , according to Greg Browning, Climatologist with the  Community Forecasts Program at the Bureau of Meteorology.