Cattlemen get their day in court over live export ban 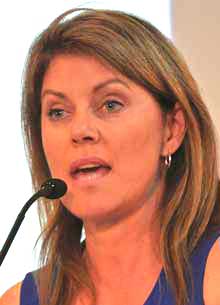 The NT Cattlemen’s Association former CEO and facilitator of the class action stemming from the 2011 live export ban, Tracey Hayes (pictured), will be in Sydney this week as those affected by the ban will get their day in court.

The matter is set down for three weeks.

Mr Manicaros quotes Ms Hayes in the statement: “Over the course of the next few weeks, the Federal Court will hear of the loss suffered by cattle producers across North Australia as a result of the Government’s decision to ban live exports of Cattle to Indonesia in June 2011.

“It was not just the farmers that endured losses – it was contractors, employees and local communities that were devastated by the Government’s ban.

“We will lead evidence showing that the Australian Government’s decision to suspend the cattle trade caused the Indonesian Government to reduce the number of cattle that they would import from Australia.”

The statement says over the past four and a half years, Australian farmers have engaged in these proceedings to seek compensation from the Commonwealth, and litigation is being undertaken as a last resort.

Mr Manicaros says in the statement the current debate regarding live export is a timely reminder that Government must not operate in a knee jerk fashion and must carefully consider the consequences and impacts of their decisions: “Australian farmers and live exporters are exporting best practice animal welfare into the markets we do business with and it is an important industry underpinning the viability of Northern Australia.”