Happy Birthday, Auntie, and good luck for the next 70. 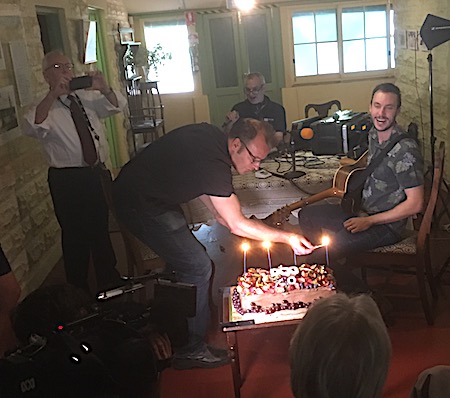 It’s 70 years since the ABC started broadcasting from Alice Springs but until the early 70s the signals came from Adelaide and later, Darwin.

Today the national broadcaster has a staff of 16 here, including reporters, presenters, producers, a camera operator and, in the last year, one of the first Indigenous trainees to work in a regional branch.

It’s an acknowledgement of the nation’s fascination with The Centre, as well as the place where things happen: The nation’s only passenger aircraft highjacking, the Kamikaze attack on Connair, the balloon disaster, Azaria, the Mack Truck murders, Falconio – and so on.

Chief of Staff Rick Hind, who is also working as a journalist, says the ABC has increased funding for the station in the past three years, part of a keener focus on regional broadcasting nation-wide.

At the same time the staff have become more flexible in their job descriptions, serving radio, TV and online, all at the same time.

It’s something I am familiar with, as a freelance producer for all Australian TV networks, including the ABC, and a few overseas ones, since 1975: “Look at my left eye” is what you say to the interviewees, which produces a perfect eye-line for the image, and you ask the questions from behind the camera.

The staff routinely cover stories ranging from national and international interest, for radio and TV news, to the popular home town subjects on the 783 AM station with regular guests including Geoff Miers on gardening and Alex Nelson on history.

The Friday Wrap has a panel of “outspoken locals” – of which I’m a member.

Last Friday the cake was cut by Mr Hind in the presence of long-time locals and most of the staff, in The Residency, across the road from the three-storey office building whose top floor was the first Alice home of the ABC. Kevin Skinner was one of the first resident journos.

“Good luck for the next 70 years” was the heart-felt wish from the locals of the town where stories have been a currency for millennia.

PHOTO: Rick Hind with the birthday cake. At left, taking a photo, is Ren Kelly, who has a long-time connection with Radio 8HA / SUN FM. Stewart Brash is in the centre, broadcasting live. Dave Crowe provided music for the birthday party.