Above: Owen Cole and Mr Furber, key figures behind the National Indigenous Cultural Centre, in the public gallery at the Town Council meeting  tonight.

The Town Council has passed a motion that is as clear as mud on its position vis a vis the National Aboriginal Art Gallery.

This followed the release of its community poll showing that 58% of respondents do not support Anzac Oval being used as a site for the project.

Mayor Damien Ryan took the initiative, moving that council supports building the gallery in Alice Springs and that it calls on the NT Government to form an implementation committee for the gallery project in partnership with the Town Council.

No mention of Anzac Oval.

The motion was passed unanimously, with no discussion.

The dismayed public – some 30 to 40 visitors – were told there would be no further debate on  the matter tonight.

There were mutterings as people began to drift outside, the loudest coming from Arrernte man Harold Furber, who is chair of the parallel project, the National Indigenous Cultural Centre: “We are being excluded once again.” 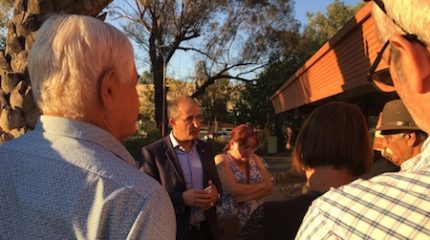 Yvonne Driscoll, who has been active in campaigning against the oval as the site of the gallery, sought to re-asssure people that the lack of mention of Anzac Oval could be taken to mean that it is excluded as a site for the gallery.

To his credit, Cr Eli Melky left the chamber to speak to constituents outside (photo), while inside the meeting moved on to other matters. He too sought to re-assure people that it is clear that Anzac Oval will not be available for the gallery.

Despite the CEO’s statement that there would be no further debate on the gallery tonight, Cr Melky said he will raise the issues later in the meeting, so that council makes clearer its intentions.

True to his word Cr Melky raised the matter at the end of the open part of the meeting, offering “a personal explanation”.

He said the point of council’s motion is to have all options on the table. His “personal position” is that he would not support giving the oval away, following the 58% rejection of such a move.

His statement would probably not pass the pub test for clarity. Most tellingly his attempt at clarification, on the matter of Anzac Oval and its future, was not echoed around the chamber.

Only Crs Jimmy Cocking and Catherine Satour spoke. Cr Cocking said he wanted to clarify what he understood would be the makeup of the implementation committee: it needed to comprise not only representatives of the Territory Government and the Town Council, but also relevant stakeholders.


Cr Satour acknowledged the confusion felt by some members of the public who had left the chamber. She said council supports keeping going discussions with the government and including stakeholders moving forward to look at other options.

Mayor Ryan, participating in the meeting by phone, when asked, had nothing further to add; he thought his motion was “pretty clear”.

Tonight council joined the NT Government in looking tricky and manipulative. In the process they managed to only further alienate critical Aboriginal constituents, and confuse, if not deceive, everybody.