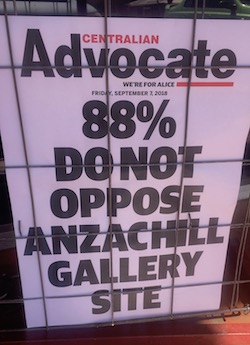 The government, in its just released report about its National Aboriginal Gallery “consultation”, is making assertions about the Alice Springs business community that are do not reflect what that community has put on the public record previously.

Far from being adamant about the Anzac Oval option, the Chamber of Commerce has favoured a site in the CBD generally, and has asked the government for a feasibility study – still not to hand.

“Without exception, all business stakeholders who were engaged cited the Anzac Hill Precinct as the preferred site for the primary reason of maximising and leveraging private sector investment and improving the visitor experience in the CBD.”

On May 13 Chamber chairman Dave Batic, who is quoted in the government report as the airport CEO, said: “We were not brought into the conversation at an early stage at all. It was the same with Tourism Central Australia. We both were not initially involved.”

We quoted him as saying having the gallery “closer to other businesses would be beneficial. That’s just pure economics of the nature of tourism” and that would mean “ideally within the CBD somewhere”.

“We have asked what the gallery would mean for our local economy.

Mr Batic says in the Alice Springs News Online report earnings are an important indicator for the whole project: “We hope it will be a large number. It’s one of the questions we’ll be asking as the government re-commences its consultation process.

On August 8 we quoted Mr Batic as saying the Chamber has “canvassed a large portion of its membership.

“CEO Alana Richardson has been talking face to face with members rather than an on-line or paper based survey as we traditionally have a very low response rate with surveys.”

“What we would like to see is the economic data between the CBD location compared to outside the CBD i.e. Desert Park.

“We have been advised this information is being compiled and will be made available shortly.

“The majority of businesses do not differentiate between the CBD or Anzac Hill, one and the same.”

The often bitter debate about the gallery has been unfortunately dominated by the question of whether it should be on the Anzac Oval site or not.

The Town Council had no difficulty in grasping the essence of that choice, and it formulated its poll question accordingly: Not at Anzac Oval was the unambiguous majority response from the 2000 plus people who felt strongly enough about it to have a say, in a poll that has a margin on error of 2%, according the council.

It will be dealing with these issues tonight.

But the government, in its “engagement” process, conflated opposition to the Anzac option with opposition to the gallery and this flawed its “consultation” from the beginning, providing generous fodder for fake news.

This arrogant deception has led to conclusions that are irrelevant because they side-step the main issue: “88% do not oppose Anzac gallery site” screamed the Murdoch newspaper’s placards. What they did not say is the 88% don’t oppose other sites either.

The paper was a major recipient of government advertising money – how much the government will not say.

There were no placements in the Alice Springs News Online which has had extensive news coverage of the issues since early 2017 .  In the 30 days to August 24 the site attracted 19,288 individual readers  (Google Analytics).

“In over one hundred targeted meetings, the community was encouraged to share their thoughts,” says the government’s final “consultation” report released on Friday.

Targeted indeed: The Anzac decision had been made, and anyone “engaging” with the government could expect not more than being browbeaten by the spin doctors.

The project team inviting [themselves] to “visit a club or organisation to share more information about the project” was one initiative, says the report.

The writer has first-hand experience of a claim being made to a club, on August 15, that was far from the truth: That government had made no decision about the Anzac option, it was claimed. Of course it had.

This is the way this information is portrayed on two full pages of the government’s glossy brochure: 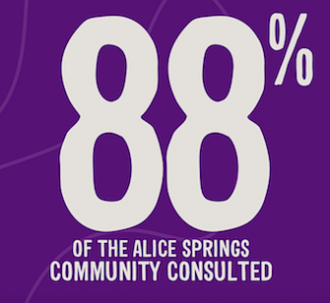 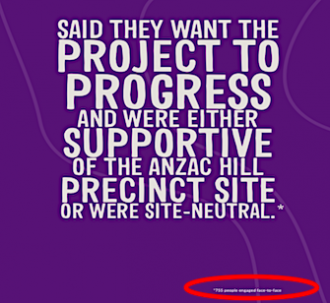 ABOVE LEFT: No, this is not saying 88% of the Alice Springs Community has been consulted (see fine print circled on the image above right, which says “755 people engaged face-to-face”. ABOVE RIGHT: This does not say 88% of that sample supported the Anzac option. Some were “site neutral” – supporting any other site option as well. In the context of Anzac – Yes or No – this statement is completely meaningless, except when it is designed to hoodwink the public. The report does not say how many people grudgingly said OK to Anzac lest the government – operating with a record fiscal deficit – killed off the project altogether.

The facts and numbers in the report are frequently mushy: “While there are a broad range of views (how many? what views?) among Aboriginal people and Elders, some of whom are supportive and some who are not (how many?), key cultural authorities (which ones?) have given their support for the Anzac Hill Precinct site to be used for the National Aboriginal Art Gallery.

“Desart … did not declare a position on the location of the project due to the diversity and number of people that they represent,” says the report.

Two things worth noting about this. Desart represents Aboriginal art centres, key contributors to the future success of any national gallery. The organisation’s long-serving CEO is Philip Watkins, who co-chaired the rebuffed initial steering committee, who recommended against the Anzac precinct location, and for the Desert Park.

“Heritage and history interest groups were unreservedly supportive of the project but held mixed views in regard to the preferred site.

“Some felt the Anzac Hill Precinct was an ideal site while others felt that an alternative site would be better suited in order to showcase the ranges and country to which much Aboriginal art responds.

“Heritage Alice Springs ardently believe the project is one of the best things to happen in Alice Springs for a long time … but preferred a site along the ranges, feeling this should be a greater influencer than economic drivers.

“However, they would support the Gallery if it was built at the Anzac Hill Precinct.” It seems they must have fallen into the gun-to-the-head category of better Anzac than nothing.

The report says the government’s “community engagement goals” are to “regain community trust”. No kidding!

They will “listen to feedback, and where suitable, identify and address concerns, clarifying project deliverables, project intent, and the next steps to be taken”.

“Promise to the public: We will implement what you decide.”

So long as it’s Anzac Oval, and nothing else, of course.