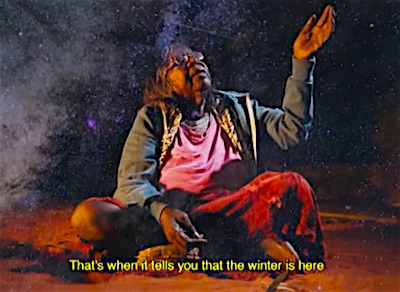 It seems likely that all peoples have in common the need to help young children go to sleep at night. This a strong memory for me of my life with my own children, decades ago now, and it is charming to experience this by the fireside with Arrernte story-tellers  in ICTV’S series, Our Bedtime Stories, launched locally last night.

A good part of Margaret Kemarre Turner’s story sets the scene – a windbreak, a fire, women sleeping on one side, the little children on the other. She tells the story in Arrernte and draws it as she goes, using leaves to represent the people.

We see her, her sister, her cousin perhaps as leaves, lying down alongside one another, in the women’s camp, and the little children, leaves too, on the other side.

When they’re settled, she sits them up to listen. The story is about winter coming and the way you can see that change of season in the night sky, in the movement of its dark shapes and and the stars within Amiwarre – The Milky Way, which gives her story its title.

It is beautifully filmed, cutting between her fireside figure, her sand drawing and the magnificent sky above.

Kathleen Wallace is filmed by daylight but her tender manner, in speaking to the imagined little ones around her, evokes that sleepy time ambience perfectly. This comes at the end of quite an action-filled story, of two brothers – Arlewarrere – the Whirly Brothers.

They are whirlwinds: one fast, the Rock Cracker; one slow, weighted down by all his children.

They start out as human, brothers who must hunt for their families. The Rock Cracker always bring plenty of kangaroo back to camp. The slow brother, despite all those mouths to feed, doesn’t do so as well.

On the fateful day that they turn into whirlwinds they have a bad feeling – fair enough, as they will never be human again! 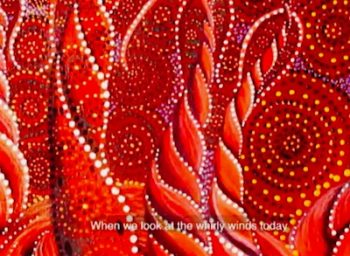 This story benefits from Mrs Wallace’s beautiful artwork – swirling dancing forms are her trademark and here we see the Arlewarrere first in black and white, and later, as they transform, in vivid reds and oranges (right).

Each story, in the series of 20, is approached distinctly, although introduced and concluded with the same animation, inspired by art work from Bindi Artists, and theme song, wriiten by Stephen Pigram, and performed by Raymond Dixon.

A third story screened last night was told by Therese Ryder (below left), filmed sitting in an easy chair in a darkened room. Her mind though is out in her country, Pwanye, in the Loves Creek area, and in her telling she summons the atmosphere of the bush camp, at the end of the day when the crickets start to chirp.

In this camp mother and father are together with their noisy little ones and they are trying to get them to quieten down. 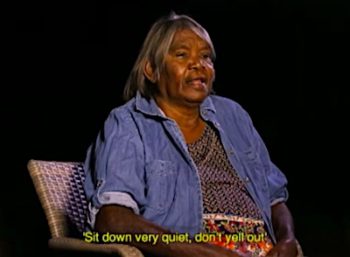 The story cuts to creatures of the night, a pair of dingoes snuffling the ground, an owl – Coork Coork.

“So, go to sleep now,” the mum and dad tell the kids, “you can play in the morning.”

The unheard chorus of parents around the world telling their children the same thing makes for these stories a great place of common ground.

While they may be primarily for language-speakers – adults in Arrernte families getting children ready for sleep – they are also well worth a look for anyone keen to have a glimpse of Aboriginal family life.

They are also a great resource for language-learners, adding to the program underway at Apmere Angkentye-Kenhe (the Yellow House behind Flynn Church, below left), where last night’s launch was held.

They are now entering the second half of their two-month long program, which includes Arrernte language classes on Tuesday evenings (5.30-7pm, last one 10 July) and open screen printing sessions on Fridays (1-4pm, last one 6 July).

At yesterday’s 30 phrase challenge the Yellow House was chockablock with language learners who are doing very well, said one of the teachers Amelia Kngwarraye Turner. 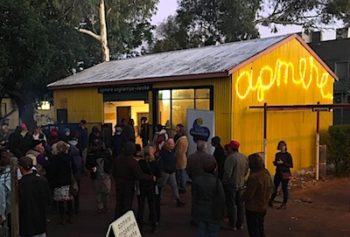 But what works especially well, say the organisers, is when people come and spend more time with the program’s Arrernte hosts, who generously share their knowledge, thoughts and experiences around language. You can drop in the middle of the day, Tuesdays, Wednesdays and Fridays, last day 13 July.

ICTV’S Our Bedtime Stories can be viewed here. (ICTV stands for Indigenous Community Television.) Story tellers from other language groups are also featured.

Images  (except for the Apmere Yellow House) are screenshots from the series.