Martin Luther King III 'disheartened' by what he saw in Alice

‘WE HAVE GOT TO FIND A WAY TO CHALLENGE YOUR NATION TO DO BETTER.’ 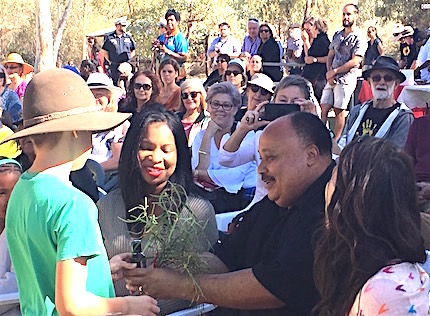 There was star power at today’s Reconciliation Week gathering at the Telegraph Station: Martin Luther King III, son of the great civil rights activist, together with wife Andrea and daughter Yolanda were the occasion’s special guests, which was particularly moving for the older people among the crowd.

Right: Martin Luther King III and wife Andrea presented with native flowers as part of the welcome to country. The school children present, many of them non-Indigenous, were invited to present flowers to all the elders present, including non-Indigeous elders.

As William Tilmouth said, thanking Mr King for his presence: “I grew up with the speeches of Mr King’s father.

“Mr King, like his father has given me strength. I thank you sir, thank you.

“You being here, spending time with us, sitting with us, listening to us, is an honour for us.

“It honours our struggle, it bears witness to our truth, it gives rise to our voice, thank you.” 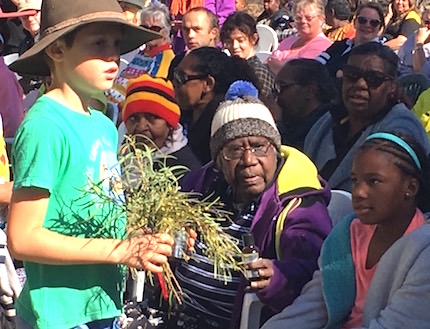 When Mr King took to the microphone the witness he bore was unsurprisingly not altogether complimentary to the present state of affairs in Alice Springs.

Left: Arrernte elder Margaret Kemarre Turner directs the schoolboy towards Mr King. Alongside her is Yolanda King who was travelling with her parents.

Coming from the USA where “some conditions are not as good as they should be”, he was “a little disappointed” with what he had seen.

He had been taken to visit White Gate, the homeland east of town where Arrernte native title holders are continuing to fight for recognised land tenure so that they can build houses there.

The gathering had heard from Felicity Hayes about the “simple wish” of her aunty, the late M. Hayes, who had “fought for native title and won”. (She was the lead claimant in Hayes v the Northern Territory, which resulted in the first successful native title claim over a town area in Australia).

Mrs M. Hayes wanted  “a house for our family and her to live on land at Irrekerlantye (White Gate). We lived in a tin shed and demountables. We all did. This is where I raised my children. Eighteen years on we are still not allowed to build houses. We have no connected water, no power, the town has grown and we still wait.”

Mr King was shocked: “How do you justify mistreating human beings who really were here first? I don’t get that.” 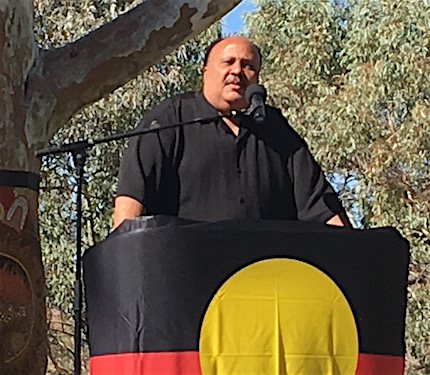 His next disappointment came as they drove through the city: “The central building you see is the brand new Supreme Court, which some are probably very excited about. For me personally I was a little disheartened,” said Mr King (left), “because I was told if you go down to the court looking for justice, much of what you will find is ‘just us’, who are Aborigine people.

“There’s something wrong with that. We’ve got to find a way to challenge your nation to do better.”

That challenge was central to all of today’s speeches, but they all also expressed hope for the future.

Mrs Hayes said there was “too much violence within our own community, injustice is part of our lives, discrimination everywhere we turn. There is racism in our streets, in our prisons, our schools, in hospitals, when we go to the shops.”

But she also acknowledge the “many Indigenous and non-indigenous people working together with respect and understanding”.

She speculated about “why Alice Springs is suffering so much”, asking “Is it because our land was stolen and we couldn’t continue our traditional law?”

She said: “Mparntwe land covers the whole of Alice Springs and some of the surrounding areas. These are our lands. We never gave them up. We have to live by white law. We accept this but we want to live on our own country with dignity.”

If that were to be achieved she saw the opportunity for us here “in the heart of Australia” to be able to “show the world how Indigenous people and non-Indigenous people can stand together in harmony and respect.”

Mr Tilmouth, chair of the organisation Children’s Ground, painted a sad picture of the present “complex situation” we are in, “born through our shared histories”.

“Our land was taken from us in the 1870s, we were stripped of our life blood … removed from our land and our families.”

The stolen generation, of whom he is one, were kept there at the Telegraph Station  “until they were farmed out across the country.”

Today “our children continue to live with racism every day, we bury our families too often, I get really sorry going to too many funerals. 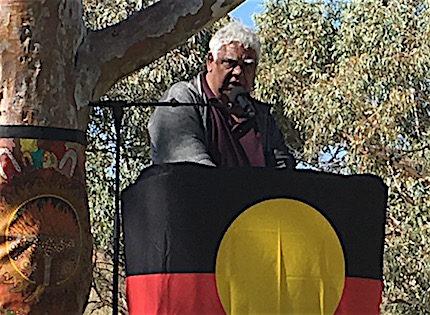 “The courts are filled with our families.” And so are the prisons, the hospital, public housing.

“We are made to feel inferior but we are not … Our people are dismissed as a problem, something to be fixed, but it is not us that are broken but the system we are forced to live in.”

The way forward must start by listening to the Arrernte people “not through the organisations but directly to us. Our law was here before non-Aboriginal people. We know who we are.

“I invite our organisations to be of service to our people, not assume the voice of our people.”

He spoke of the situation of young people.

“This year, as in many years gone by, there’s been tension in our community because our children are walking the streets at night. They walk the streets because of violence, poverty, homelessness, hopelessness.”

Reconciliation, he said, requires us “to understand them and not judge them”:

“I watch our young people struggling, they are wondering where they fit in, what does life hold for them.

“I ask young people to remember our laws and hold your identity. We need you as the next generation to hold on to our culture, our language.”

Too may are getting lost, he said: “Grog, drugs, violence is not who we are. They were the poisons given to us.”

Like Mrs Hayes, he ended on a positive note. Indeed, he had started on one, encouraged to see the many school children who were at the gathering and actively participating in it: This was “refreshing, it gives you hope that people are interested.”

He saw a possible “new future for our children … We are survivors, we are the longest living culture in the world because our knowledge and society evolved and is deep and sophisticated.”

That means First Nations people have a lot to offer, from which we all can learn: “Let’s start a new chapter in the history of Australia.”


Today’s events were organised by Children’s Ground and Akeyulerre Healing Centre, with support from Lhere Artepe.

Below: Drum Atweme, pupils at Yipirinya School, put on a  crowd-pleasing performance and then all the school children were invited to join in a kangaroo dance (at bottom).