Cemeteries could be turned into parks 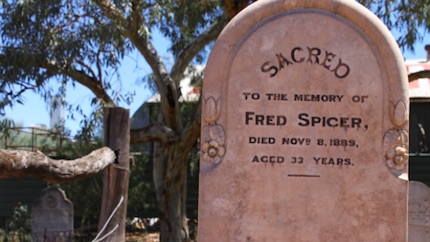 Changes are afoot to the way Territorians bury their dead. The government is proposing to modernise the Cemeteries Act 1952. Among several new measures, the legislation will allow for new methods for the disposal of human remains and applications to use closed cemeteries as parkland.

The new legislation will authorise disposal by “alkaline hydrolysis”. The process is also called “bio-cremation” because it produces fewer carbon emissions and pollutants than cremation, according to the Wikipedia entry under this heading.  It explains that the body is placed in a pressure vessel that is then filled with a mixture of water and lye, and heated to a temperature around 160 °C (320 °F), but at an elevated pressure, which prevents boiling.

The Town Council, which takes care of cemeteries in Alice Springs, heard about the proposed charges from Solomon Gaturu, from the NT Department of Housing and Community development.

Mr Gaturu said alkaline hydrolysis uses only a quarter of the energy that cremation uses. Facilities providing for this method of disposal would have to be licensed.

Councillor Jimmy Cocking asked Mr Gaturu about the regulation of cremation emissions: would there would be anything in the legislative review to deal with this issue?

Mr Gaturu  took that question on notice. Cr Cocking understands there are no regulatory arrangements in the NT for control of emissions from cremation.

A proposed measure that could prove to be controversial is the conversion to parkland of closed cemeteries, where burials are no longer taking place.

The only such cemetery at present in Alice Springs is the tiny Stuart Town Cemetery in George Crescent. Its location, size and historic character probably make it an unlikely candidate for parkland but then all cemeteries have historic character.

An exposure draft Bill, allowing for comment, is expected by the middle of year, he said.

There was no other noteworthy news from last night’s Town Council meeting. No debate, no questions without notice.

Cr Eli Melky was present but scarcely participated in the meeting, unusual for him. This included declining to say anything at all about his activities over the past month.

Crs Marli Banks and Catherine Satour were both absent, on personal leave.