I‘d booked in for The Lost Dance Project, secret location to be advised. I couldn’t imagine that they would dance in this pot-holed, dusty carpark, but I knew to expect the unexpected. This was a production by Madeleine Krenek and Frankie Snowdon, who, with their collaborators, are carving out a space for a more challenging experience of contemporary dance in The Centre.

What they do is not immediately seductive; they don’t rely on easily digestible sexiness or thrilling physical prowess to draw in their audience. In fact the opposite is true.  The first part of the performance that will soon unfold is quite dystopian: the soundscape conjures a hyper-industrialised environment and the humans moving within it seem anxious, broken and very much alone. 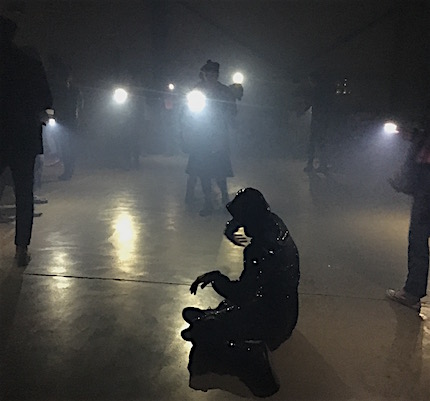 This is perhaps why Krenek and Snowdon pay a lot of attention to building a relationship with their audience before the actual performance begins. When they presented The Perception Experiment at Araluen last year the performers individually took audience members by the hand – an unusually intimate  experience –  and guided them through the dark into the performance space.

With The Lost Dance Project the approach is more collective but equally as effective in getting audience members to give themselves into the performers’ hands, figuratively speaking (for the time being).

So, in response to that first text, a crowd duly gathered in the makeshift carpark (where Pizza Hut once stood). We had names ticked off, wrist bands attached, and were told to keep our phones on, with the volume turned up – the exact opposite of instructions in most performance situations. Eventually though it was a live person, not a text message, who said, “Follow me.”

The procession suddenly emerging from the carpark to cross the road must have looked odd to passing motorists. It is not often that people move in a crowd through Alice Springs.

Along the dark street everyone was noticeably quiet, as you are when you are uncertain what’s going to happen next. When we arrived at the corner of Bath St and Stott Terrace, it seemed likely that we were headed for the Red Hots Arts dance space, which indeed was the case.

Text message: “Turn on your torch & see what you can find. You are allowed anywhere in the space.”

The rear yard of Red Hots Arts is packed with the odds and ends of creative production but the point was not so much to find anything as to put yourself in an exploratory frame of mind. Soon a door opened and people began to drift inside, phone torches still on, their small beams lighting the dystopian scene described above. 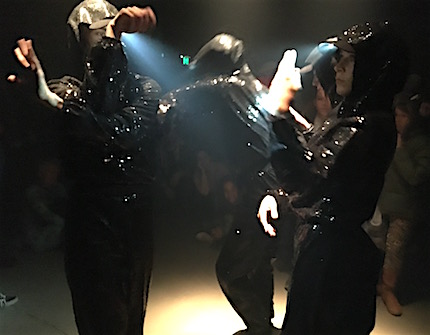 I‘d forgotten the theme statement for the project that came with the initial publicity. In fact, I hadn’t absorbed it at all, responding to its poetic title and who was presenting – the creators of The Perception Experiment –rather than to what it was about.

So I was puzzled by what I was looking at through a smoky haze punctuated by these points of light: four performers in different corners of the room, androgynous in their black hooded and glinting jumpsuits, and suffering. Trembling that was one of the main physical motifs. Later when I looked at the theme statement, that this was “an investigation and comment on the rise of a digital generation”,  I understood the scene in retrospect as conjuring an utterly comfortless future in which digital communication has deeply alienated people from one another.

The production seemed to work backwards, in a historical sense, from there.

Text message: “Turn off your torch.”

The four figures came together and moved through the space like automatons, tiny searchlights coming from under the visors of their hooded costumes. The audience became the anonymous milling crowd of city streets or railway platforms, the performers pushing past them without a glance.

Text message: “Feel free to take our picture if you like?”

The audience did like: there was the familiar image of many of our collective experiences these days, arms and devices raised, all attention to the captured image. 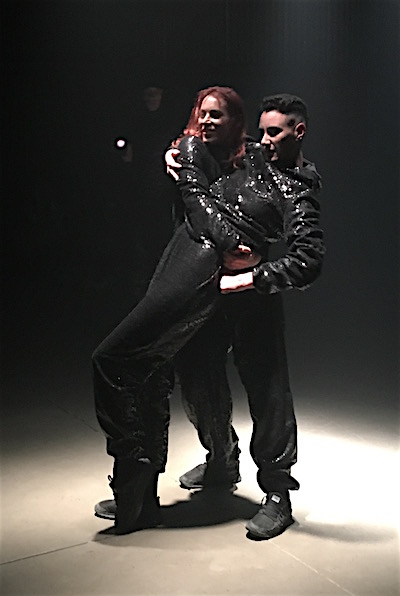 Little by little the individuality of the performers emerged, hoods were pushed back. Krenek’s red hair was like a sudden flowering, a delight to behold. And then came the sound of the human voice. Krenek and Snowdon had paired, talking in snatches to one another; their moves playfully working through a series of poses.

I can remember them talking about how strong they were or perhaps wondering whether they were strong, about their friendship, about the gay marriage vote (“Thank you Australia”). You could only half hear what they were saying, as really the address was to one another, that was the point.

There were some more directions to the audience, the performers holding up mini-signs on their phone screens rather than texting, re-emphasising the collective. Then a text message: “Find someone to dance with & head onto the dance floor”. And suddenly, after increasingly elaborated synthesised music to that point, we were listening to Bette Midler’s “The Rose”: “Some say love, it is a hunger / an endless aching need. / I say love, it is a flower / and you its only seed …”

The audience was only too happy to respond to its romance and nostalgia. The room was soon filled with joyful twirling pairs.

Text message: “Move to the walls.”

Some excellent sequences followed this breakout moment but the audience’s attention, or perhaps I should say tension, seemed to have loosened. The performers were now quite distinctly attired, they had recovered their individualised physical presence, but felt separate from the audience in the way performers are more conventionally, and the sequences seemed to come as a series of post-scripts.

Two of these later sequences though were particularly memorable. One had Krenek and Snowdon stretched out on the floor, rolling slowly from one side to another, physically entwined, as if lovers. It was quiet, understated, beautiful.

The other had the male performers, Benjamin Hancock and James Andrews, in a pair. They went through a series of gestures between them, a gaze, a kiss on the cheek, an embrace. Between each one, Andrews, who has particularly piercing blue eyes, crossed the room and using a recorded message on his phone, invited a member of the audience, fixing her with his rather unnerving stare, to respond: “Will you look into my eyes?” etcetera.

It wasn’t easy to be that member of the audience, despite all of the trust established to that point.  For the performance I attended it was a young woman and she seemed to want to sink into the floor. But it was poignant, even if somewhat at her expense. It was as though we were in a prequel of the first sequence, an articulation of the danger of becoming too absorbed in the social media dance, instead of the full dance of life.

Credits for this latest creative milestone in the Krenek and Snowdon journey:

Note: This article has been modified since first published to remove the name 2NDTOE, which belongs to a collective not directly involved with this production.