Uluru Statement: A year later the debate goes on

A conversation with Thomas Mayor (pictured), who took part in the proclamation of the Uluru Statement a year ago today, and who is taking the original copy, on a large canvas, around the country, is bound to become circular.

Q: Why should the Aboriginal and Torres Strait Islander People have a constitutionally enshrined voice in Federal Parliament while no other lobby such as unions and business organisations have?

A: Because we are the Aboriginal and Torres Strait Islander People.

Mr Mayor’s day job –  almost ironically – is branch secretary of the 300-member Maritime Union of Australia in Darwin. He is a Torres Strait Islander born and bred in Darwin.

He says the disclosures of youth incarceration played a part in motivating him to become involved in one of the 13 dialogue groups on constitutional recognition, with 100 members each, around the nation.

“Seven people walked out on the second day but around 250 remained and endorsed the statement on the third morning with a standing ovation.

“There were people embracing each-other with tears in their eyes, who had debated each-other throughout the process. It was an incredible moment.”

Mr Mayor says the people at The Rock were a fair selection “because you can’t invite all of the 700,000 Indigenous people of Australia,” 3% of the nation’s population.

The reaction to the Uluru Statement by Prime Minister Malcolm Turnbull and Barnaby Joyce, portraying the Uluru Statement as seeking a third chamber of Parliament, is easily rebutted, says Mr Mayor: “It’s untrue. That’s not what came out of Uluru. We are seeking First Nation representation that gives advice on legislation and policy before it is made. We are calling for an advisory body.”

NEWS: You can be an advisory body without being appointed or enshrined in the Constitution. Mr Turnbull would be unwise to ignore the advice from a body representing up to 700,000 people.

MAYOR: The difference is, that occasionally they’ll invite whomever they choose to consult on decisions that they make. This is different. The constitutional reform would ensure that these First Nations representatives would be at the front end of decision making. The Constitution would require that for matters – which could be anything – that affect Aborigines and Torres Strait Islanders, the Parliament would seek advice before they make a decision. 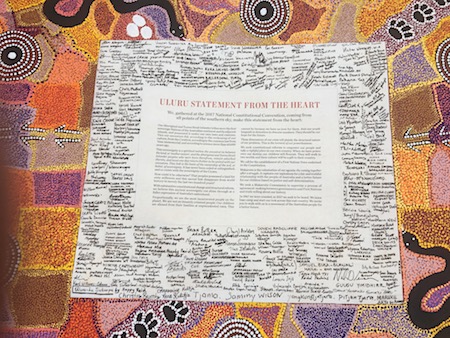 MAYOR: He wouldn’t, but it’s much more difficult for them not to support or respond to that advice because it comes from a constitutionally enshrined body.

NEWS: So the PM would be entitled to say, I enjoyed listening to you but now get lost and I’m doing something entirely different.

MAYOR: He could still ignore that advice, but this advice comes from legitimate, authorised representation which does not exist now really on a national basis. That advice would come from people who understand what is going on in their communities. Bureaucrats in Canberra, or in government offices,  don’t really understand.

NEWS: How authorised would it be?

MAYOR: We are saying the First Nations should design how they are represented. They may want to have a ballot, they may say, this is our cultural leader and so is the leader of our people, through that ancient structure.

NEWS: But that is a body you are at liberty to form. For example, the Chambers of Commerce and the trade unions are giving lots of political advice without needing an constitutional imprimatur.

MAYOR: What you need to keep in mind is that when the Constitution was formed in 1901 there were no First Nations at the table. People who were there were white males from the colonies of Australia at the time. Now First People would be. It is recognised that terra nullius is untrue, this place was already settled, civilised, had structures, law. We are not going so far as to say we want a third chamber. We understand the current politics will not accept that. But we are saying, at the minimum, there should be First Nations representatives with a Voice to Parliament, not in Parliament.

NEWS: Which is what everybody has. They are called elected Members of Parliament.

MAYOR: Firstly, we have major issues, the highest incarceration rates in the world, not because we are innately criminal; high suicide rates. Something has to be done differently. The current democratic system is failing our people.

NEWS: You are not the only people being failed. There are old people, asylum seekers …

MAYOR: Yes, but they were not sovereign nations of this country that have suffered genocide.

NEWS: Until 100 years ago the Austrian Empire included Hungary, Czechoslovakia, some of Yugoslavia  and part of Italy – some of them now further splintered. Now Austria is a tiny nation. Things change.

MAYOR: Yes, and things can change to back to what they should have been in 1901. We need to set this Voice up.

NEWS: Are you saying you can’t stop the Prime Minister of the Parliament to obtain advice from whomever they want?

MAYOR: Well, that would be clearly divisive if there was a structure set up. The amendment to the Constitution would make this body [sought by the Uluru Statement] the place from which advice must be sought before decisions are made about us. [Not to take that advice] would be going against very solid, informed advice from those communities. And that will make a difference. Turnbull rejected it because they like to make decisions without being challenged.

NEWS: What if they obtained advice from people other than those you are proposing?

MAYOR: They would be getting advice from the wrong place. Where do you go and talk to the First Nations now? How would you do it? It would cost a huge amount of money, take a lot of time, you’d be searching for the right person. If you want to talk to the business community you go to the Business Council of Australia. You want to talk to the Trade Union movement you go to the ACTU. They have legitimate, authorised representatives. It’s like an association, like a union.

NEWS: The Chamber wouldn’t say on issues of commerce you have to talk to them and nobody else.

MAYOR: It’s a different situation. We are talking about a situation where the Constitution was designed to ensure that those colonies share power. And it would have happened with First Nations if we would do it today. This isn’t Europe. This is a country that has people who are suffering in this country, because of generational issues which take time to fix.

NEWS: On a very small scale, here in Alice Springs, after more than 40 years as a journalist here, I could not find with confidence any person who would give me a representative and uncontested answer on important issues concerning Aboriginal people.

MAYOR: Native title, the race to get funding to run your NGOs, all that stuff has divided our people. The Uluru Statement is a visionary thing. The divisions in our communities have been caused by the government. Therefore they have an obligation to deliver on this one national consensus.