Above: Desert Festival parade in 2013. Last year’s was underwhelming. There’ll be a break this year to allow more time to develop an exciting parade offering next year.

The Desert Festival will deliver a springtime festive season across six weeks, with two to three events each week.

It will work collaboratively with existing venues along Todd Street and the mall, rather than create its own hub space, an expensive endeavour not justified by ticket sales. Venues include Monty’s, Epilogue, Flynn Church, and Totem Theatre.

It will develop lighting and artwork to transform Todd Street annually into a springtime festive precinct.

It will continue to work with Henley-on-Todd for a reinvigorated, curated community parade.

Most of these changes will be delivered this year, although the new look parade won’t be in place until next year. 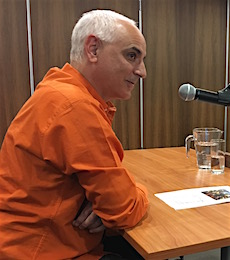 Council gave the festival $15,000 last year to deliver the parade. Not all the funding was spent due to the project coordinator departing abruptly, which became evident in an underwhelming parade. The balance of the funds was returned to council.

One of the lessons from that flop was the importance of a greater lead-in time, especially for the festival to be able to work with schools. For parade participation to be built into their curriculum, schools need to have notice in November the year before the parade, said Mr Starkman.

To this end he is asked council to allow the anticipated allocation for the parade in this year’s budget to go towards next year’s parade. He said there will simply not be time this year to develop the parade and he doesn’t like “delivering bad programming”.

Mr Starkman asked council to allow the unexpended moneys from last year to be put towards developing the lighting and artwork for the festive precinct.

He said the festival is “ditching the idea” of an annual theme for its program and adopting instead an accumulative approach, as the Darwin Festival has done, building on the successful offerings of past programming and adding new offerings from year to year.

He pointed to some of the successes of past festivals, enduring events which now stand alone – Bush Bands Bash, Desert Song, Wearable Arts (which he hopes will be staged again this year). They’re all reasons to be confident that the festival can keeping moving forward.

He said the season format, with two to three events across a six week (minimum) period, would allow the festival to stop “competing with itself”, which is what happens when there are a lot of events within a short period of time: people necessarily have to choose between them.