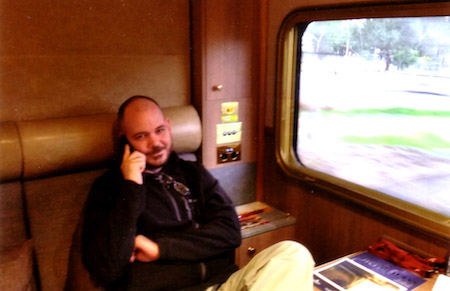 An Adelaide to Darwin train ticket costing just $22 short of $8000 would buy you something very special.

That’s what Marg Kennedy and her son, Dan (pictured), expected when they bought a platinum ticket from Great Southern Rail (GSR) for a two-berth cabin on The Ghan in July last year.

Ms Kennedy says in fact the service and entertainment were vastly inferior when compared to the gold tickets for half the price.

The main reason, she says, was that the staff were fully engaged in looking after the far more numerous gold passengers. There were only six platinum ones – the others being two couples related to each-other.

A spokeswoman for GSR responded: “Platinum guests aboard The Ghan consistently provide an average 97% rating for our service and hospitality and a 93% rating for the food and beverages offered on board – truly world-class results.”

Ms Kennedy says her son owns a string of hospitality businesses in Central America and had limited opportunity of researching the trip.

It was meant to be a treat for her in fond memory of travelling on the Old Ghan in her student days, taking five days to get to The Alice.

She says platinum people were left to entertain themselves.

They could not control air conditioning units in the lounge nor the cabin. Most of them stayed in their cabins to rug up.

Dietary needs were recorded but never catered for, she says.

They were never advised of snacks or the daily “cuppa” they found out later was available in the cabins.

There was no WiFi, no screen entertainment, no library for books or news magazines.

The cabin and the upholstery were “absolutely filthy,” says Ms Kennedy.

Mr Kennedy, notified of an emergency in one of his businesses, asked if he could step out of the carriage during one of the train’s stops to smoke a cigarette, “settling himself down”.

The guard said “of course” and encouraged Mr Kennedy to speak to the person in charge of the opening of doors.

When the opportunity arose that person said bluntly: “I am in charge of opening the door and you are not getting off.”

Both were relieved when the overseas emergency required Mr Kennedy to cut the trip short in Alice Springs, half way. His mother left with him.

She says she  complained either to Tourism NT or to Tourism Central Australia, or both, and to the railway company.

No refund was offered and neither was an apology.

An acquaintance of Ms Kennedy, former Alice Springs local Paul Lelliott, says: “I have tried contacting the relevant tourism connections, as has she, but no joy.”

The Alice Springs News Online offered the right of reply or comment.

We’ve had no response so far from the NT Minister for Tourism nor from Tourism Central Australia, representing the industry.

A spokeswoman for GSR offered no apology to Ms Kennedy but said the company is “disappointed to hear the journey undertaken by the Kennedys last year did not meet their expectations.

“We encourage our guests to provide feedback on every journey in order to continually improve our experiences.”

The spokeswoman also said guests choosing to leave the journey halfway through are not entitled to a refund, and are permitted only to disembark at designated safe stops, regardless of whether the train itself stops at other destinations to refuel or change drivers.