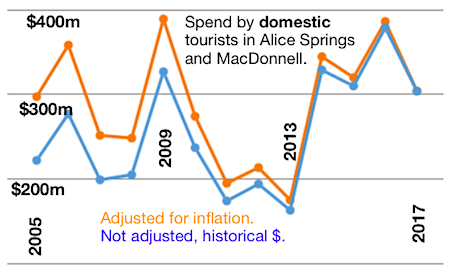 Spend by domestic tourists in Alice Springs and the MacDonnells in the past 12 years has been flat, almost to the dollar, when adjusted for inflation.

This is while the NT governments have spent more than half a billion dollars on promotion. 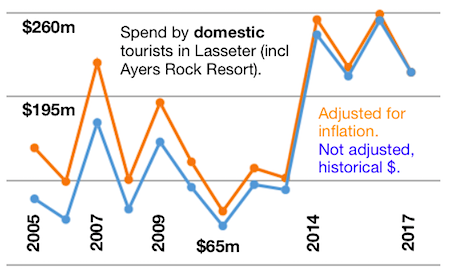 Oddly, there was also a drop in domestic spending in Alice Springs last year, from $386m to $304m.

It’s noteworthy that international visitors, inflation-adjusted, during the 12 years spent $2.5b in the Ayers Rock Resort region, two and a half times as much as compared to The Alice region, where they forked out a mere $983m.

Domestic tourists spent more in The Alice than at The Rock – $3.8b compared to $2.3b.

The figures in this report are from Tourism Research Australia. The inflation figures were worked out with the online Reserve Bank of Australia Inflation Calculator.

A report headed “Tourism dollars for Alice: not a pretty picture” posted on March 29 contained errors and has been removed from this site. 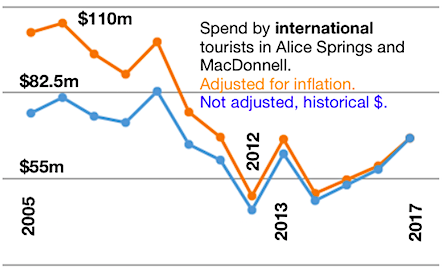 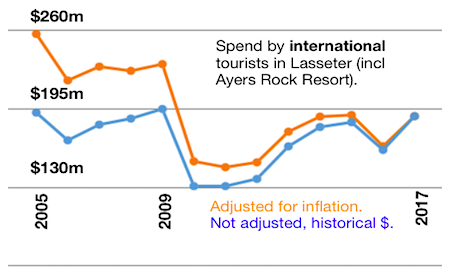 By GEOFF MIERS The party is over and it's time to get back into the garden before major disasters unfold after rain on nine days...
Read more
Issue 3

A touch of light: the colony

By MIKE GILLAM Photo © Mike Gillam In the late 1980s I visited Watarrka in the George Gill Range, a soon to be gazetted National Park,...
Read more
Issue 2

By KIERAN FINNANE As of Friday, 22 January 2021, Australia will be on the wrong side of international law. This is the day the Treaty...
Read more