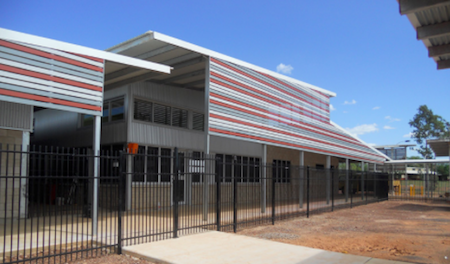 Families Minister Dale Wakefield usually sidesteps questions why children roaming the streets at night, committing offences, are not taken into protective custody, a measure that police can apply to adults.

But an initiative in Wadeye – formerly Port Keats in the Top End – may point to a solution to problems that have Alice Springs stumped, and Ms Wakefield says: “I am really happy to look at it.”

The collaboration between a hostel, called Kardu Darrikardu Numida (photos), run by Aboriginal Hostels, with the primary and secondary schools there, run by the Catholic Church, has given excellent academic results and a very low truancy rate, according to a source speaking on the condition of not being named.

While Indigenous Affairs Minister Nigel Scullion and two elected members of the West Daly Regional Council praise the program, neither Aboriginal Hostels nor the schools’ senior staff will provide comment, despite several requests from the Alice Springs News Online since early on Tuesday.

Hostels has even asked us to channel our request, about something that was clearly shaping up as a “good news” story, through the Department of the Prime Minister and Cabinet in Canberra – but even that didn’t get results.

However, Senator Scullion, speaking to the News in Alice Springs this morning, says the project works for kids in the Wadeye – the biggest Aboriginal community in the NT – as well as young people from surrounding outstations.

Asked whether the kids are able to leave the 40-bed hostel during the night, Senator Scullion said: “They have to stay in the hostel at night, but there are obviously flexibilities because some parents live just down the road.

“The kids are usually allowed out only on weekends. 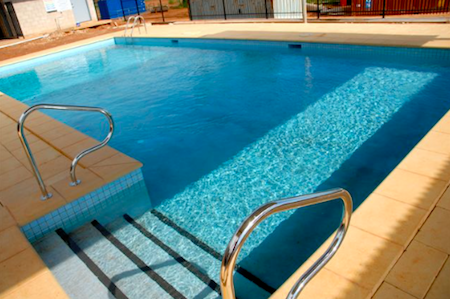 “They go from the hostel, as if it was their home, some 50 metres to the school. They go through school all day and then they come back home [at the hostel].

“They do their homework. It’s a gated facility. You can’t get in and out. They are providing a level of protection and safety for children, just like a [family] home would do.”

Should there be such a hostel in Alice Springs?

“I think it’s accepted that a failure of the one in Wadeye is that it wasn’s built slightly out of town. It wasn’t the intention to provide a home for people who live 20 metres away. Why would we provide a surrogate home when there is a home 20 metres away?”

What if the family home is dysfunctional?

“We have a number of Aboriginal Hostels in Alice Springs already,” Senator Scullion said.

The News put to him that Alice Springs has the problem of 150 to 200 kids being out at night getting into trouble and some committing offences. Could the system that operates in Wadeye succeed here?

“Well, I can say what I know about the kids in Wadeye is that they are in there voluntarily, and they volunteer to stay in. I’m not so sure what the nature is of the children you are referring to. It’s not like a prison. They want to stay there.”

What if the parents say to their kids we want you to stay there?

“In Wadeye that’s what happens. The parents agree with the kids and say, let’s get you into that facility. I can’t recall any circumstances where they are forced to be there.

“It’s a really wonderful little community, a lot of people trying to help out there with activities. You have a surrogate parenting process through the whole place.”

He says kids are happy to be boarding at the hostel: “There’s lots of sport. It keeps them active. They are not being bored at school.

“They don’t wander around at night. Staff can stop them.”

Deputy Mayor Terry Sams has a son and a nephew at the hostel and the high school.

“The feedback is the school is doing really well.”

Ms Wakefield, when asked by the News this morning, said the Wadeye initiative had been mentioned to her in Tennant Creek, which is interested in the scheme, “because they have that boarding facility there.

“It was one of the things I said I would follow up, because it is education and Federal.”

That means it wouldn’t come out of her budget.