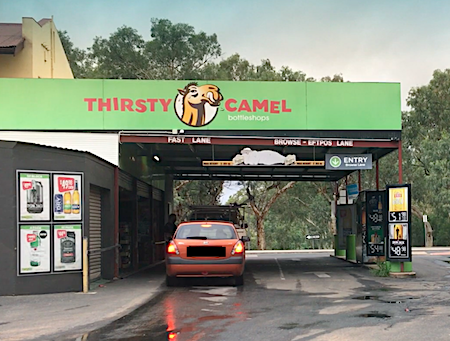 The government commits to “cops at bottle shops” in response to the Riley Review but the police says it will provide officers if it can spare them, reports ERWIN CHLANDA.


With trouble in the streets continuing, attributed largely to the parents of delinquents getting drunk rather than looking after their kids, the government’s alcohol policies are in utter disarray.

It pledged in response to the Riley Report to continue with POSIs – cops at bottle shops – until licensing inspectors can take over that function.

Yet POSIs are sporadic: For example, there were none at the Todd Tavern bottle shop (pictured) when we checked on Saturday and yesterday. We have asked for an explanation, and an update on police policy. [See update below.]

This morning the government announced that “an additional 75 police auxiliaries will be trained as liquor inspectors” for Alice Springs, Katherine and Tennant Creek, to be posted at take-aways.

But there’s a problem: While Chief Minister Michael Gunner states that “these police auxiliaries will be recruited over the next 12 months, and trained in Alice Springs,” he makes no mention of what happens between now and then.

Opposition Leader Gary Higgins is raising that question while Independent Robyn Lambley is calling for a Parliamentary inquiry into the police.

Any absence of POSIs from bottle shops suggests that the police – possibly under pressure from its union – are acting in contravention of the policy touted by the government.

The government “supports” – that means, “to be implemented in full” – two specific recommendations by Judge Riley: “POSIs continue in regional centres after the commencement of the BDR until (and unless) it can be demonstrated that they are no longer required” and “Police continue to undertake the POSI role until Licensing Inspectors are employed and trained”.

Yet it seems there is going to be a gap of up to 12 months, making an incomplete keeping of the government’s promises.

The government commented on the Riley Report that it “recognises the effectiveness of POSIs / Temporary Beat Locations (TBLs) are a harm minimisation tool”.

The NT Police Association’s Paul McCue agrees – so long as cops have no role in it: “Why is this a police job?

“The police auxiliary scheme was introduced to the NT in the early 1990s to provide support to police in three main employment streams, communications, front counter and the watch house.

“None of these streams are in a first response capacity on the frontline. An auxiliary police officer receives approximately seven weeks’ training to work in these crucial support roles, but this latest announcement sees them pushed onto the streets, to do bottle shop work.

“This will unfairly place our Auxiliaries at risk because they do not receive the same extensive training required by constables to deal with working on the frontline in dangerous and unpredictable environments.”

Mr McCue says the announcement to train in Alice Springs also comes as a surprise, given there is no dedicated training facility in the town. The current Accelerated Recruit Squad being trained in Alice Springs was forced to use current operational facilities, with trainers being required to temporarily relocate to Alice: “It must get a fit for purpose training facility.”

He also says the government needs to fast-track amendments to the Liquor Act, providing police more direct power to deal with breaches: “It’s clear the government cannot trust Licensing to enforce the law, so police need to be given the power to act appropriately.

“Further amendments must include a responsibility on the licensee to create a safe environment for its patrons and the public, and harsher penalties for any breaches detected, including longer suspension of licences.

“It’s a clear message to the Liquor Industry, your time is up,”

The government statement this morning says the Police Auxiliary Liquor Inspectors will form part of a new 97-member strong unit within the NT Police, and will include 12 police officers specifically targeting secondary supply, seven operational staff and three prosecutors.

The measures will be backed by an $11.83m investment annually – “the largest ever investment allocated to target the supply of alcohol in the NT.

“This will see frontline police return to core policing roles – including getting them back into remote police stations.”

Ten additional CCTV cameras will be deployed outside bottle shops “to catch those people involved in secondary supply”.

Meanwhile Opposition Leader Gary Higgins says: “Today’s announcement lacks detail and does not address the need for an immediate response to stemming the supply of alcohol and secondary supply in the Territory, including in remote areas.

“This announcement fails to address the critical shortage of police resources in remote locations.

“Alice Springs, Katherine and Tennant Creek crime is out of control because of the vacuum without POSIs.

“Recruiting, training and appointing Auxiliaries will take at least a year by government’s own admission and will draw on existing police officers to conduct training, be it at the Darwin Police College or in Alice Springs.”

“With reports of up to 100 vacant positions working conditions are stretched and strained.”

This inquiry should look at police numbers over the past 10 years; current challenges in the recruitment and retention of staff; the allocation of staff; communications; roles and responsibilities; resourcing and risks and demands.

The police provided this response: Temporary Beat Locations (TBLs) are a tool that Police use, and will continue to use to combat alcohol related crime and antisocial behaviour, but the deployment of TBLs is balanced with addressing other community policing needs including property offending, traffic, domestic and family violence and youth engagement.

NT Police continue to deploy TBLs as part of a pro-active approach to social order management, but the deployment of TBLs is balanced with addressing other community policing needs.

[I am]  pleased the NT Government has seen the light and has finally decided to commit to keeping police outside of bottle shops, Araluen MLA Robyn Lambley said in a media release.

This continuing flip flopping on alcohol policy by Gunner is ridiculous and has come at a huge cost to Territorians. It also shows Gunner has no clear vision or direction of where he is taking Territorians.

The Banned Drinkers Register is a complete flop in Alice Springs where less than 500 local people are on it. Less than 1% of drinkers are being refused service.

It is no surprise Gunner has had to back flip (again!) on alcohol policy. Last year he back flipped on the Dan [Murphy] Ban and the floor space limit.

My only concern now is when will the Police auxiliaries be in place at our Bottle Shops and what will happen in the meantime.