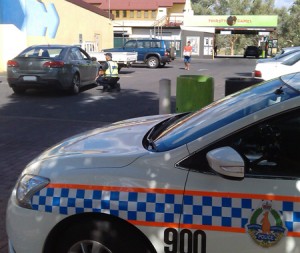 Sir, The Central Australian Aboriginal Congress has added its voice to the many other businesses and organisations calling on the NT Police Commissioner to resume full time police presence on all the town’s takeaway liquor outlets during trading hours.

There has been a large and unacceptable increase in harms since the decision was made to remove the police presence from bottle shops.

Congress has been approached by many concerned Aboriginal people about the increased drunkenness and harms in the community – which we know can be prevented.

We know that the episodic placement of police on bottle shops is ineffective and unacceptable.

The demonstrated effectiveness of the ongoing police presence at all liquor outlets is now obvious to everyone as we all live and breathe the harms being caused by the decision of the local police command in refusing to continue this measure.

The situation we have now is as clear as it was when the former Banned Drinkers Register (BDR) was suddenly withdrawn and resulted in the level of alcohol related harm in the community skyrocketing. This piecemeal approach to policy on alcohol is not good enough and the whole of Alice Springs is suffering.

What is happening now is not what was recommended in the Riley review into alcohol. The police presence at bottle shops was not meant to change until such time as the BDR was fully operational and even then, only in a measured way alongside proper monitoring of reliable data that could raise the alarm about any increase in harm.

This has to stop now. We need Commissioner Kershaw to demonstrate leadership and act now to put police back on the doors of the town’s bottle shops and get things under control.

Of course, we all understand the many social determinants of alcohol dependence but these longer term issues should not be used as an excuse to ignore what works now.