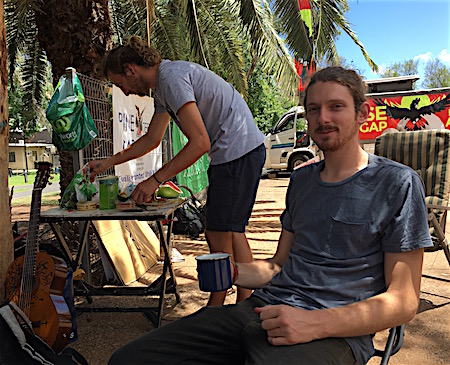 What were the Peace Pilgrims trying to prevent when they entered the prohibited area of Pine Gap in September last year?

If they can establish that there was a sudden or extraordinary emergency and that their action on entering the prohibited area of Pine Gap in September last year was a reasonable way to respond to that emergency, then that could be a legal defence of their actions.

Right: Franz Dowling during a break from court, Tim Webb behind him.

One by one they have presented their evidence in chief.

Rarely would a more principled group of people come before the court. All are Christians, Catholic Christians influenced by the Catholic Worker movement. Their faith goes to much more than a framework of beliefs and values and devotional practices.

It informs their everyday lives in exceptional ways. They live in “voluntary simplicity”, in communal houses that offer hospitality to the poor, and in their spare time they devote themselves to non-violent action for peace and against war.

This goes for the three young men, aged 20 to 31, as well as for the older members of the group. The three live together in a house of hospitality in Brisbane. They earn their livings as disability support workers. One of them, Franz Dowling, is also a full-time student, studying human sciences and music.

In many ways, they seem like other young men of their age; they’re lively and certainly enjoy a laugh, but there is also an unusual seriousness of purpose. They believe utterly in what they are doing.

This is my impression. Who knows what the jury is thinking but the Crown (the prosecution) does not put in question the genuineness of the beliefs of all five. This has been stated over and over again.

What the Crown did try to challenge in cross-examinations today was the purpose of their action in the Pine Gap prohibited area. Michael McHugh SC tried to get each one to agree that the central purpose was to lament and protest, rather than to disrupt the base in order to prevent an emergency.

He spent the most time with Margaret Pestorius, who in the legal action at least has taken the lead.

She held the line (so it seemed to me): the lament was the prelude, in a ceremonial and liturgical sense, to the action of disruption that would unfold. This would happen when they had placed their bodies on the line in the very place from where – it is their case – the signals are sent for targeting drone strikes.

Placing one’s body on the line is a principle of non-violence in the tradition of Mohandas Ghandi and others, Ms Pestorius explained.

Mr McHugh also tried to establish that there was, by the evidence of the accused, nothing in the nature of a sudden or extraordinary emergency, because Pine Gap’s activities on that day were “ordinary”. They were like the activities of every other day, even if those activities are involved with drone strikes. 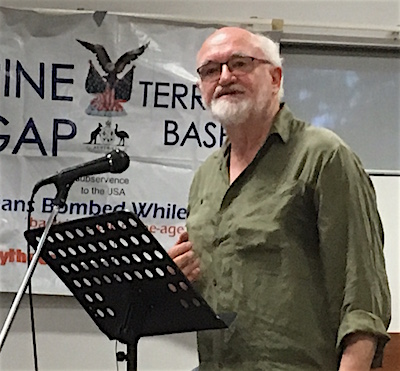 The Pilgrims called as a witness for their case Professor Richard Tanter. His evidence faced numerous objections from the Crown. Mr McHugh was worried that it might inflame the prejudices and emotions of the jury. It was also not necessary, he argued, because the Crown accepted the genuineness of the beliefs of the accused. As well, there was nothing the Crown could do with it: we are “in the dark on this”, said Mr McHugh, we can’t cross-examine, we can’t deal with it.

Justice Reeves allowed defendant Andrew Paine to proceed with his questioning of Prof Tanter, although he consistently reminded him to bring the questions back to the more narrow confines of the defence  rather than the broad issues of foreign policy, the American alliance and so on.

Prof Tanter – an internationally recognised expert in this area even though he was not called as an expert witness – described Pine Gap’s role in the drone program and its dramatic escalation over the last 10 years as the result of new technologies and software becoming available.

Data from cell phone intercepts are downlinked by Pine Gap, processed and analysed to determine military and non-military targets of interest. This intelligence may then be used to determine who goes onto a list of potential targets for a drone strike.

What effect would it have on the drone program if someone succeeded in disrupting Pine Gap’s activities, asked Mr Paine.

Prof Tanter said it would limit the extent of the targeting information being provided and it would also draw public attention to the escalation of the drone program, about which opinion polls show many Australians are concerned.

Mr McHugh tried to challenge the reasonableness of the conduct of the Pilgrims in achieving such disruption.

How could they reasonably contend that they were disrupting anything, as all they did was play music and pray before they were arrested and they were not equipped to do anything else. They had no tools with them to cut fences, for instance.

Ms Pestorius said it was their intention to go further into the base if they could and that she was confident the fit young men of their party could have climbed the inner fence to enter the base facilities.

Mr McHugh tried to get them to agree that there are many other lawful avenues for pursuing their goals and that they indeed participate in those activities, everything from writing letters to protest marches.

In reply, the accused could point to the long and frustrating experience of the peace movement in trying to bring about an end to wars and the extra-judicial killings that they say are taking place as part of the US drone program.

This is what led them to the action they took.

The Crown and defence cases have concluded. Legal argument around the defences is underway. This has to be concluded before closing addresses. Then Justice Reeves will give directions to the jury before they retire to consider their verdict.