Above: Peace Pilgrims outside the Supreme Court this morning. Mr Christie in the black shirt with blue flag, showing the planet Earth.

There were peace songs and prayers outside the Supreme Court in Alice Springs this morning ahead of the trial of Pine Gap Peace Pilgrim Paul Christie. He is accused of being unlawfully in a prohibited area – the so-called Joint Defence Facility Pine Gap – on 3 October 2016.

The prosecution against him is under Commonwealth legislation, the 1952 Defence Special Undertakings (DSU) Act.

Mr Christie is representing himself. Opposite him is a legal  team of five, headed up by Senior Counsel.

In his opening address, the Crown Prosecutor Michael McHugh said the case is straightforward.

Evidence will be heard from Protective Services Officers and Australian Federal Police Officers that Mr Christie was located inside the facility just after 6am, about 1.5 kms from its northern boundary and two kms east of the western boundary. He was on or near the bed of Laura Creek which runs through the area, having followed the creek to his location.

He had a map of the area on him, but no permit, although it was clear from signs on the boundary fence that the area was prohibited. He had no ID documents but gave his name as Paul Christie.

The court will also see in evidence CCTV footage and the record of interview Mr Christie gave to police following his arrest.

Much of this morning was taken up with empanelment of the jury – in the end, eight women and four men – and on instructions to them from Justice John Reeves.

Fourteen people had sought to be excused from the jury, several of them as present or past employees at Pine Gap.


What must be rare footage taken inside the perimeter boundary of the Pine Gap military base was shown in court this afternoon.

On grainy CCTV vision we saw a sandy creek bed in early morning light, some of it perhaps thick with grass, shaded by tall gums – the kind of place you would be happy to make camp, except that you would likely be arrested.

A small figure, noticeable mainly for his red clothing and gear, entered screen left, walked along the creek for a bit, then turned around and walked slowly back in the other direction.

The time counter ticked over from around 6.26 am on 3 October 2016 to about 6.31, when an AFP vehicle arrived, and perhaps another, along with a number of uniformed personnel.

It was hard to see, through the trees and scrub, the arrest of the “person of interest” (POI) that followed.

By the evidence of the arresting officer, that person, Paul Christie, the accused in this trial, when his attention was alerted put his hands out from his side, voluntarily dropped to his knees, then put his hands on his head. Protective Services Officer Lloyd Adams said he and his partner then “gained subject control” – such is the strange impersonal language that is used. This included cuffing the POI.

PSO Adams had been dispatched to the scene by his supervisor Matthew Gadsby. We learned that Operation Fryatt was in full swing, to protect the military facility from the actions of peace activists attending a conference and associated events organised by the Independent & Peaceful Australia Network (IPAN).

PSO Gadsby was cross-examined by Mr Christie who is representing himself. A friend, fellow activist Graeme Dunstan, has been sitting alongside him, offering moral support and whispered advice. 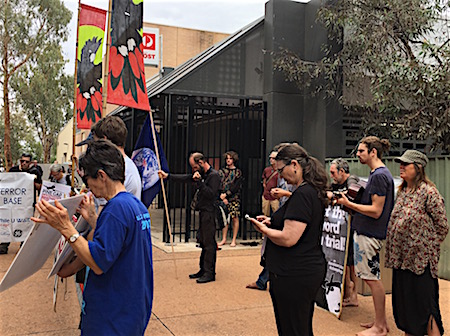 Mr Christie asked PSO Gadsby whether he thought that he, Mr Christie, posed any danger or threat to the military base?

Right: Peace protesters outside the court. Note the bare feet of two men in the back row. They are Peace Pilgrims Jim and Franz Dowling, the habitually bare-footed father and son who are among the five to be tried later this week on a similar charge to Mr Christie’s. Their lack of footwear was used today to prevent them from entering the court.

Crown Prosecutor McHugh objected: Mr Gadsby’s opinion on such matters was irrelevant and nor did the question go to fact in relation to the charge of unlawful entry in a prohibited area.

Justice Reeves said that was probably correct but he would allow Mr Christie some leeway. Such leeway is the advantage of being unrepresented, especially for an activist.

Mr Christie went on to ask PSO Gadsby whether the red hooded jacket he was wearing was the kind of clothing that might be expected of someone with mischief or sinister intent in mind.

“Yes,” was PSO Gadsby’s reply: “You were in a prohibited area, where you were not meant to be.”

Mr Christie went further. He was arrested inside the outer perimeter, which is a 1.5 m high barbed wire fence of the kind used for cattle paddocks. There is a more elaborate internal fence around the base’s facilities. Crown Prosecutor McHugh had alluded to it earlier but then stopped himself from asking more detail about its construction. Now Mr Christie asked whether the inner perimeter could be easily penetrated.

Again, it would speak to the nature of Mr Christie’s action, his lack of recklessness and lack of means to penetrate it.

The jury was sent out which means that I can not report on what followed, but when they came back, the question was disallowed on the grounds of irrelevance.

When Mr Christie cross-examined the arresting officer, PSO Adams, he asked whether once he had “gained subject control”, had he, Mr Christie resisted. “No,” was the simple answer.

Final witness of the day was Peter Davey, a Federal Agent with the AFP, a man with detective’s training. As a Protection Liaison Officer during times of protest, he said his job is to liaise with the protesters, to make a risk assessment in relation to high office bearers and Commonwealth property, but also to facilitate the conduct of their protest in a lawful manner.

He is the officer who conducted the Record of Interview (ROI) of Mr Christie inside the Alice Springs police watch-house. The court has begun watching this ROI, about 50 minutes in duration.