Your ideas for the CBD sought, again

Above: Alice Springs town centre. This image and below, screen captures from the Have Your Say flythrough video.

Rolled into the Territory Government’s Have Your Say consultation on possible sites for the national Indigenous art gallery are a range of questions  about upgrades to the Alice Springs CBD, on which it is working with the Town Council.

The government has $20m on the table. That’s quite a lot of money when you consider the budget of $5m for the past Todd Street North and Parsons Street redevelopment. As well, the Town Council has put aside $2m, “to encourage the government’s interest in the CBD”, as Mayor Damien Ryan puts it.

In contrast to many previous consultations about the planning and development of the town, this process has had no public airing in the form of a meeting to inform, stimulate and develop ideas, respond to questions.

The “vision” is captured in a video – less than two minutes’ worth after an outline of the gallery site options – and feedback is invited in an online survey. There are also pop-up public displays: those forthcoming are at Alice Plaza today (Friday) and Tuesday and at the mall markets (Sunday and next Thursday evening). 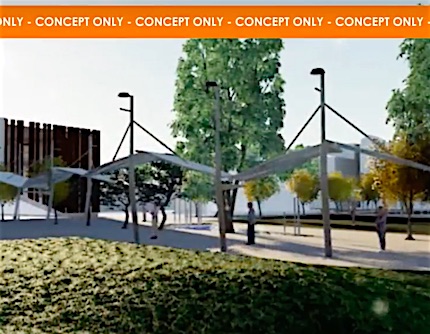 The vision includes a “transformation” of Todd Mall into a “cooler and more interactive place”, inviting to local and visitors, with more shade and seating.

Does that mean more trees and shrubs? Should be a no-brainer, but the video talks about “heat mitigation technology” without defining what that is, except that it would allow in “natural light in winter months”. However, an accompanying brochure is liberally illustrated with plant species and talks about a “cool green street canopy linking Todd Mall to Hartley Street”.

The brochure also talks about the “heat islands” created by the use of dark materials on roofs, streets and pavements. A heat study to determine the hottest spots around the CBD is underway.

The video goes on to propose that the government and council could work on a concept of a “lifelong learning centre” within the mall, with “evolving functions” from the public library, integrated with cafes, mixed-use development and public spaces.

This is strange: the discussion paper recently released by the Planning Commission puts the location for this future redevelopment at the Civic Centre: “A Lifelong Learning Centre site could be at the current library site, but in matching with its evolving function, could integrate with cafes, mixed use developments, and public spaces.” Which is it?

The video goes on to immediately talk about the Meeting Place, the name given to the joint project of council and the Uniting Church, on church and council-owned lots, between the mall and Hartley Street. (This name has also been taken on for the colourfully painted shed behind Adelaide House, where a group of volunteers have been offering activities to youth after hours.)

Mayor Ryan says he continues to talk about this project with government. On the Have Your Say video the project is described as creating an inviting public space with landscaped areas for events and community use with “direct access to surrounding retailers”. The concept also includes playgrounds and children’s water play areas. Anything for older youth, a critical demographic for the town and planners to be thinking about? The video doesn’t say. 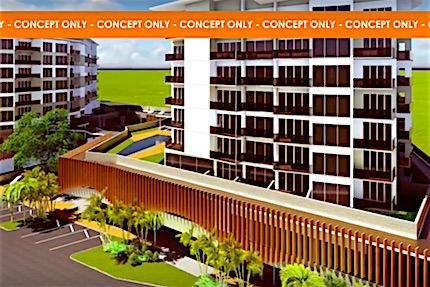 Neither is there mention of a residential component which, until now, has always been part of the discussion of this project. There’s also no question about the Meeting Place in on the online survey, so for the time being it appears a very uncertain and ill-defined prospect.

The video also devotes precious seconds to discussion of hypothetical Melanka site options (right), when really there is no news to report on this privately owned land, languishing for years without use except as a way to spearhead raising building height limits and as an informal carpark.

All this is a far cry from the detailed consultations, in forums, small groups and public meetings that went into the process behind the redevelopment of Todd Street North. Disappointment in the impact of that redevelopment should not obscure the detailed information and ideas that emerged from the process, and the defined projects, of which Todd Street North and the related work on Parsons Street was but one.

Mayor Ryan says he continues to remind the government of this work in his discussions with them. But is the message getting through? And is the current superficial mishmash of a consultation the end of the story as far as community input on the expenditure of $20m goes?

No, says a spokesperson for the Department of the Chief Minister. She says the department has reviewed a number of the past processes and “had regard for common themes” before seeking the current feedback. The concepts and themes will be refined based on the feedback to be received and there will be “more opportunities for comment as the project concepts are developed”.

“There are some activities that could commence quickly,” says the spokesperson, “such as some of the city activation work [not specified], and the Live Alice Mparntwe arts grants are already creating some colour and movement in town.”

These include workshops by Central Craft in Adelaide House, hula hoop workouts on the Flynn Church lawns, Saturdays, 10-11am, till 25 November, and CAAMA Radio youth broadcast workshops (at the Meeting Place, Thursday and Friday, 5-9pm, till 24 November).

The spokesperson says other ideas  for the CBD “will take longer, but discussions will be held with the Alice Springs Town Council around projects that could be done in partnership.”