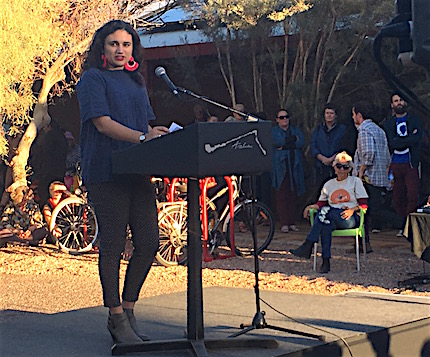 Is the national Indigenous art gallery process being hijacked? Or is the current consultation about a possible site for a project we know so little about simply designed to stem growing angst about the declining population and stagnant economy of our town?

Left: Tourism and Culture Minister Lauren Moss at Desert Mob in September; no sign of her nor of the committee co-chairs  in the recent announcement.

When the announcement came last Thursday of two purportedly recommended sites for the gallery (see image at bottom), it was not from Tourism and Culture Minister Lauren Moss nor from either of the co-chairs of steering committee, Hetti Perkins and Philip Watkins.

Instead it came from committee member and departmental CEO, Alastair Shields.

In seeming catch-up mode, on Friday a media release was put out by Chief Minister Michael Gunner.

The release is noteworthy for making no mention of the cultures the gallery is intended to celebrate, indeed no mention of Aboriginal people at all.

This is in contrast to the way Mr Gunner spoke of the project in his 2017 The Year Ahead speech earlier in the year, when the focus was strongly on the gallery’s cultural role and what this could mean for Aboriginal people in Central Australia:  “This is about saying to Aboriginal kids in Alice Springs, and indeed Aboriginal kids across the nation, that what and where you come from is special,” Mr Gunner said then.

That speech also put the gallery forward as “the centrepiece of an Alice Springs revitalisation”, but now revitalisation is the sole message.

The spiel is rolling the gallery’s promised budget allocation of $50m, as well as the $20m for the Nganampa Anwernekenhe cultural centre, into a $90m figure “to revitalise the CBD, attract tourists and create jobs in Alice Springs”. (The remaining $20m was put on the table specifically for CBD revitalisation.)

Again, no mention of Aboriginal people, only non-specific  “diversity and culture”.

The emphasis of the video is strongly on the Anzac oval site, with the expense of providing an alternative stadium and sports ground with two ovals seemingly no barrier. There is also distracting discussion of connecting the Anzac site with the mall by a driverless bus, when it is a matter of a few minutes’ walk at the most.

There is no mention of a transport plan for the Desert Park option, where it would indeed be necessary and could also be a selling point: the drive west opens up vistas towards Alhekulyele / Mt Gillen and once you turn into the Desert Park, suburban Alice Springs gives way to a quite different environment and ambience.

Although Mr Shields in his announcement to Alice Springs News Online last week referred to “cultural considerations” for the Indigenous gallery site, there is no mention of these in the video, nor in Mr Gunner’s release, let alone discussion of what they might be.

A so-called factsheet on the gallery, which you are urged to download from the Have Your Say page, provides only aerial views of the two proposed sites and not so much as a single sentence overview of the project. However, there is such a sentence in the page’s online survey. This is what it says: “The Iconic National Indigenous Art Gallery will hold a globally significant Australia-wide art collection from the world’s oldest continuous culture under one roof in Alice Springs.”

That sentence points to the ambition and complexity of this project yet there has never been so much as a public information session or discussion paper about it that would allow locals to make any kind of informed comment about a site.

Critically, while I understand that the steering committee has met with key local Aboriginal groups and individuals, formal consultations with Arrernte custodians about hosting such an institution on their country have not yet taken place. Having Arrernte people on board will be fundamental to the integrity of the project.

All of this amounts to a very flimsy basis on which to seek public comment and it is therefore hard to imagine that the community’s views, whatever they might be, will have much relevance in the long run.


Images: screen captures from the government’s video on the Have Your say page.

Below: In the government’s ‘factsheet’ we are told the size of the two locations but nothing at all about the relevant cultural considerations.