Not much more than a year ago, six peace activists were arrested inside Pine Gap: they were playing a musical lament on viola and guitar and praying. This month they are returning to Alice Springs to stand trial.

Their charge: “entering a prohibited area” under the 1952 Defence Special Undertakings (DSU) Act. If found guilty, they face fines of up to $42,000 and up to seven years in gaol.

Pine Gap, the so called Joint Defence Facility, plays a key role in providing intelligence and operational support for US military operations.

The activists, known as the Pine Gap Pilgrims, were taking part in events to mark the 50th anniversary of the signing of the Pine Gap Agreement. They wanted to see an end to the suffering and harm caused by US war-making. 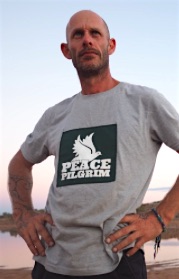 When they were brought before the Local Court after their arrest, Judge Daynor Trigg dismissed the case as the prosecution had commenced without the authorisation of the Attorney-General as required under the legislation.

Attorney-General George Brandis signed the Consent to Proceed in December and the six duly received their summonses. They now face two separate jury trials in the Supreme Court, starting on 13 November with the trial of Paul Christie, followed on 16 November by the second trial of Margaret Pestorius, Tim Webb, Franz Dowling, Andrew Paine and Jim Dowling.

Speaking on behalf of the Peace Pilgrims, Margaret Pestorius said, “The surveillance conducted from Pine Gap fuels dangerous US military operations, including the destructive bombing of communities in Iraq, Yemen and Syria. We went to Pine Gap to pray,  bear witness and lament the suffering that Australia and Pine Gap causes.  We as Australians are responsible and connected to this death and mutilation. We prayed for that to change.” 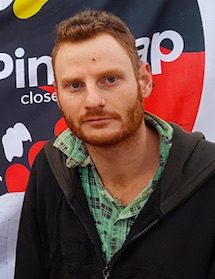 Professor Richard Tanter of Melbourne University is an expert researcher on the changing role of Pine Gap over decades, and will be traveling to Alice Springs for the trial.  Said Prof Tanter: “Australia is both literally and institutionally hardwired into the US global surveillance system and military operations. Pine Gap’s new roles and technologies have changed the character of the ‘alliance’ itself, closing the space for choices by Australia in how it is involved in US military endeavours.”

Former Senator Scott Ludlum will likewise be in Alice Springs for the trial. Said Mr Ludlum: “While these individuals committed absolutely no damage at all, they were committed to nonviolence, this base is implicated in nuclear weapons targeting and drone assassinations and US-run massive surveillance efforts targeted at civilian populations around the world. That’s what happens at Pine Gap. That’s what it’s for. Against the scale of activities going on there, the voices of these peaceful demonstrators need to be heard and supported. They are standing up against institutionalised violence. They are standing up for peace.”

In a recent Background Briefing on the role of Pine Gap, Emily Howie of the Human Rights Law Centre stated, “The legal problem that’s created by drone strikes is that there may very well be violations of the laws of armed conflict, or war crimes as it’s called colloquially, and that Australia may be involved in those potential war crimes through the facility at Pine Gap.”

The defendants are all associated with Peace Pilgrims, spirit-led groups of people who use nonviolence to oppose the harms of war and the militarisation of civil society. Some are connected to the Catholic Worker Movement. All identify as committed proponents of nonviolence and truth speaking in the tradition of Mohandas Gandhi, Martin Luther King and Dorothy Day.

Jim Dowling, 61,  long term Brisbane Catholic Worker, was a member of Christians Against All Terrorism (also known as the Pine Gap 4) who entered Pine Gap in 2015 and shut the facility for five hours. They were acquitted on appeal. Jim was recently found guilty of removing a sword from a cross in Toowong, Brisbane. 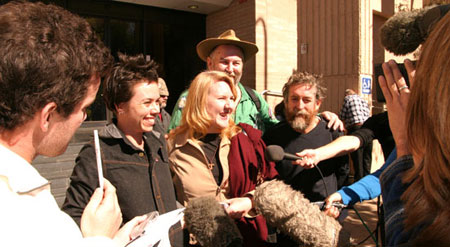 Margaret Pestorius, 53,  is a long term Christian concerned about peace and justice issues, a social worker and classical musician. She formed CairnsPeacebyPeace.org with her late husband Bryan Law, who himself was a member of the Pine Gap 4 (at left).

Pestorius participated in the campaign to challenge operations at Pine Gap during the trials (2006 – 2008) of the Pine Gap 4. She has conducted several pilgrimages against the militarisation of the Indigenous lands at Shoalwater Bay during Talisman Saber exercises, a key fortifier of the Australia/US alliance.

Paul Christie, 44, is a youth worker and event producer. He identifies as a prayer activist who looks for places to speak truth and break the denial he sees in the society. He has been involved in ‘pilgrimage’ to witness to Talisman Sabre, the combined US Australian military exercises conducted near Rockhampton.


Andy Paine, 31, is a researcher and radio host at 4zzz in Brisbane. He lives in community with the Dorothy Day Catholic Workers and participates in a range of social issues. With Jim Dowling and Margaret Pestorius he has been involved in ‘pilgrimages’ at Talisman Sabre, the combined US Australian military exercises conducted near Rockhampton.

Tim Webb, 23, is a disability worker. He is cousin of Sam Land, a member of the ‘Waihopai Ploughshares Three’: a group of Christians who dismantled the dome covering the antenna in the NZ/US Waihopai military station in 2008. Sam Land noted that his inspiration for the action at Waihopai was the Pine Gap 4 ‘inspection’. Tim was recently found guilty of shaping a sword which had been taken from a cross in Toowong in Brisbane into a gardening tool.

Franz Dowling, 20,  is a songwriter and guitarist student studying music at university. He lives in community at the Dorothy Day Catholic Worker house. As the son of Jim Dowling, Franz has been involved with nonviolence and anti-militarism his whole life! He was recently convicted of singing and playing the guitar during the removal of a sword from a cross in Brisbane.

On the trial of the Pine Gap 4:

Despite protests Pine Gap bigger, more powerful than ever

Pine Gap: Important talks but who was listening?