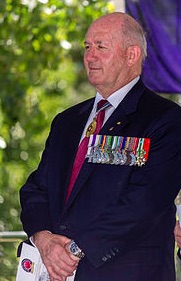 The Governor General, Peter Cosgrove, will be opening the Alice Springs Show on Friday next week, accompanied by Lady Cosgrove.

She says the office of  His Excellency General the Honourable Sir Peter Cosgrove AK MC (Retd), to use his full title, has told her he is touring shows around Australia which he regards as a significant institution in regional centres.

This means Chief Minister Michael Gunner, whilst still having a spot on the podium, is relegated to be the number two speaker.

Some may say it’s poetic justice: Mr Gunner’s office, which usually books eight display stalls, has cancelled this arrangement this year, leaving a sizeable hole in the Show’s budget.

Meanwhile the dog exhibitors are having a special occasion: It will be the 400th dog show for them, which of course is counting all their shows, not just the one at The Alice Springs Show.

The showmen’s guild rides have arrived from the Mt Isa show.

Ms Gibbins says they now have a week to check and repair equipment which usually makes some cash flow into the economy.