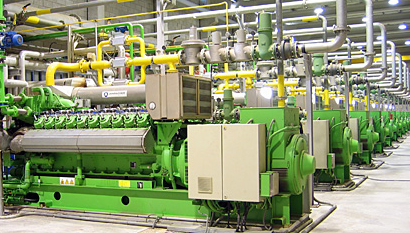 Mr Duignan responded to a request for comment, made ahead of publication, from the Alice Springs News Online.

He said: “It is disappointing that the fantastic announcement regarding the new energy storage system for Alice Springs is being derided even before ground is broken on the project.”

Mr Duignan denied that shutting down the Ron Goodin power station adjacent to the Golf Course Estate, the shift to Owen Springs as well as the introduction of battery storage are putting supply at risk.

“In fact, some of the key benefits of the storage system are in stark contrast to the claims made in your article.  The very reason we are utilising this technology is to gain advantages in reliability, not put the system at more risk.”

In fact it will “provide an integrated solution that will allow future growth in renewables – something that is not possible at the moment with the current configuration.”

Mr Duignan says some statements by Mr Hayes “do not sit within the control of Territory Generation and are in fact broader Power Water network issues”.

Mr Hayes, in response to questions from the News, made detailed comment on the distribution system, the wires and transformers that take the electricity from the power station to the consumer.

Mr Duignan says about the Ron Goodin power station that the “continued use of ageing equipment in a built-up suburban area [would be] increasingly difficult to maintain, risking the very claims made about reliability – not to mention increased emissions and costs to produce”. 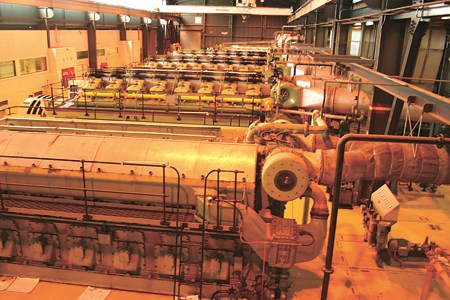 Decommissioning of Ron Goodin (at left) will not start until the new systems at the upgraded Owen Springs Power Station are proven and “will remain operational – or in active standby mode – until mid-2018 at the very least, “until we are comfortable that we have guaranteed the safe reliability of power supply”.

Decommissioning will take a further two years to complete.

Mr Duignan then replied to individual points made by Mr Hayes in Monday’s report.

• The ability of our new Battery Energy Storage System (below right) unit in the Sadadeen Valley to respond is one tenth of a second and a significant improvement on existing technology.  This will improve the stability of Territory Generations electricity production, reducing costs and improving reliability.

• Owen Springs has been remotely controlled since its commissioning in 2009. The move of centralising operations to the modern Remote Operations Centre (ROC) is in line with industry best-practice, so that the entire Territory Generation fleet around the Territory can be monitored and optimised.  Along with upgrades to the associated control systems and high speed communication links, it will bring Territory Generation up to being a world class provider of energy. In comparison, other jurisdictions have been remotely controlling power stations for over 30 years; safely, reliably and efficiently.

• In reply to the statement by Mr Hayes that a stand-by engine, if it is at Ron Goodin, “can be started and brought up to full load – best scenario – in two minutes”: It is not practical to restore power in a safe manner in 120 seconds. Our people are trained to only restore generation only if it is safe to do so and this assessment process in itself can take longer than this time period. Once generation is available the restoration of power to the customer is managed by System Control (Power Water Corporation).

• Our new Jenbacher engines (photo top right) will commence operations significantly faster than the MAN units [at Owen Springs]. They also have individual starting systems (electric similar to your car) which will shorten the response to starting multiple generators well below the aged Ron Goodin station equipment.

• To suggest that any modern building in Darwin is only constructed to a Category Two cyclone appears to be an erroneous statement without any basis. Regardless of the Category, TGen has a comprehensive Emergency Plan in place to shift operations to our back-up site in Alice Springs if required.  Cyclones are a predicted weather system that give Territory Generation advanced warning of any arrival. Territory Generation processes will see a proactive relocation of critical staff to Owen Springs and [this] is one of the reasons we have planned a redundancy system there.

• In the event of a “fail over” of our Berrimah facility then each of our stations will revert to local control. Our new team at Owen Springs will be fully conversant in local operations of the station.

• Jenbachers are not started via “manual turn”, they use a highly reliable and commonly used technology – an electric starter motor (like a car engine). Over 5GW of the Jenbacher engines are installed globally in a wide variety of conditions and fuel supply conditions (the Owen Springs installation is 0.041GW).  One of the reasons why Jenbacher was chosen as a solution for both Tennant Creek and Alice Springs was its proven suitability in hot climates. These statements appear to be designed to discredit Owen Springs Power Station in its entirety; and are done so with little factual basis.

• There is no foreseeable situation where “a delay of about an hour” would occur, ordinarily engines will automatically start. In the event that does not occur, then Territory Generation’s highly-trained Outside Operators will be onsite (at Owen Springs) 24/7 and where a manual intervention is required the response time is in minutes.

• Our stations – particularly the ones remote from Darwin and Alice Springs – eg Yulara, Katherine, Tennant Creek – all have a highly autonomous control system that start and stop engines safely to produce reliable and economic electricity for the people of the Northern Territory. This is the same for the expanded Owen Springs station where the engines will automatically start.

• Mr Duignan rejected the claim by Mr Hayes that at night the Remote Operating Centre will be manned by a single person, and if that person is busy with a Darwin fault, Alice Springs will have to wait. There will be a single person at Owen Springs at night, and that person will not be monitoring engines, a function transferred to Darwin. Says Mr Duignan: “Neither statement is factual and appears to be designed solely as scaremongering within the community. Territory Generation’s manning at Owen Springs is not being reduced as a result of the ROC. It is currently manned for the majority of the day and we will be increasing this to continuous manning in the very near future.  TGen’s resources – even when stretched – will ensure that we deliver our main aim to provide efficient and reliable power supply to all Territorians.

• Owen Springs is remotely controlled already; local control capabilities are not being impacted, rather enhanced through upgraded control systems and improved monitoring via the ROC.

• Territory Generation does not own, operate or maintain any of the Alice Springs electricity network. This is under the control and management of PWC’s System Control. 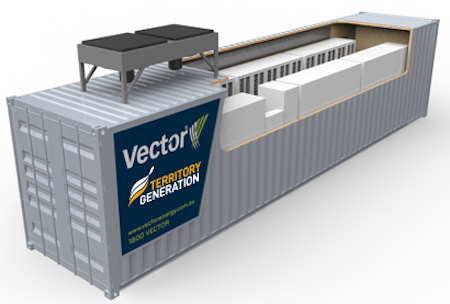 • Both statements [about the Vector storage] are factually incorrect and appear to ignore the media release regarding the system, which clearly stated the Battery Energy Storage System (at right) will supply 5MW for 40 minutes. The claims regarding the system being useless are reported without any fact, reference or technical basis.  Territory Generation has just concluded one of the most comprehensive tender processes with proven world-class technology. Industry experts will be able to confirm that a unit of this size will stabilise the generation and contribute to “peak shaving” on the network during the highest demand periods.

• The introduction of the recently announced BESS unit will result in significant savings and manage solar variability in Alice Springs. This is the entire basis of its justification. Uterne at 4.1MW can easily be managed by a 5MW BESS (which can peak for 6 seconds at 8MW).

• T-Gen has actively engaged with its employees on future operating models since August 2016, having raised some of these models in late 2014. We have undertaken a recruitment process for Owen Springs which has now been finalised, with staff expected to start at Owen Springs Station shortly. A result of moving from old, labour-intensive engines to newer, more efficient, plant and equipment is that they are less labour intensive. We understand that some of these changes are challenging for some staff, however we cannot continue to produce electricity the same way we have done for the past 40 years.  We will continue to work with our employees, the ETU and the wider community to minimise the effect of these changes.

• Safety systems and ongoing improvement is a continuous journey. Feedback from staff and unions alike is taken onboard and managed to improve the workplace. We are improving our engagement through our elected health and safety representatives and improved management of safety improvements. Territory Generation has not implemented its new Safe Systems of Work in Alice Springs. We are working through a fine tuning of the system in consultation with our staff and do not intend implementing this new system at Owen Springs until mid-August at the earliest.

• Territory Generation is confident that we will transition the majority of our staff; and although a small number are currently listed as surplus by the time Ron Goodin moves into decommissioning we believe this will reduce due to natural attrition.  We will continue to work with the ETU and our employees on the Ron Goodin decommissioning process and remain confident that we will reach agreed outcomes for all of our employees.

• It is our preference to have all of our stations running as efficiently as possible 100% of the time, however this is just not possible with older equipment which has some extreme challenges. The commitment to Owen Springs was made 18 months ago by the government, with planning going back even longer. We look forward to the Owen Springs being delivered in just over six months, with the new engines being highly efficient from the use of fuel, through to maintenance costs. The age of the Ron Goodin machines means that at a low efficiency of 29% they simply cannot compete with new engines performing at over 42%.