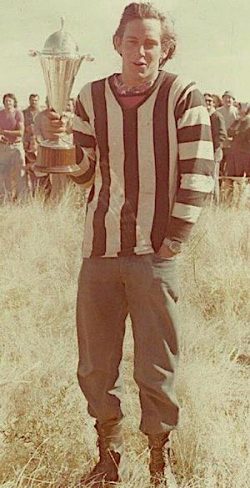 In 1976 Geoff Curtis (at left) did it on a Yamaha 250, which he rode to work every day with his dog sitting on the tank.

The Le Mans style start of this first “there and back challenge” was signalled with a blast from a shotgun.

Today the Finke is believed to be the largest desert race in the world. Its 41st running was launched in the Mall today by president Antony Yoffa (pictured below left with vice-president Damien Ryan).

The prologue will be on Saturday, with the southbound leg, 220 gruelling kilometres, to Finke, on Sunday and the return trip on Monday.

Some 12,000 spectators usually camp along the way to watch the race and enjoy a traditional bush trip, sleeping in the swag and cooking on the campfire.

Mr Yoffa says $6m will be spent in town this week alone, by competitors from interstate plus crews and entourage .

He says car competitors usually bring an average of 10 people each, and bike riders, six or seven, swelling the town’s population by 4000 to 5000, not counting media, officials and grey nomads extending their stay to experience the race, says Mr Yoffa.

Alice also gains exposure by the web streaming of the event: 30,000 people tuned in last year.

Mr Yoffa says 270 volunteers are already registered, and there will be 300 by Friday night. 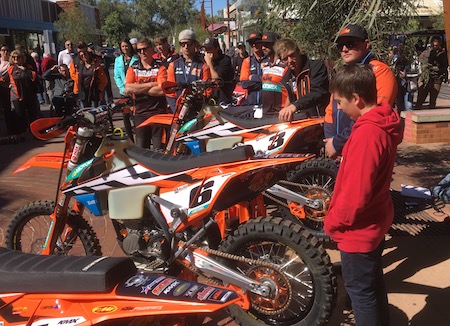 Tatts is in their final year of principal sponsorship but Mr Yoffa says the club hopes they will renew next year.

New entry, Troy Schoen, with wife Deborah as the navigator, (photo at top) will be piloting an SS Racetech Pro Hustler with a 6000cc Chevrolet engine, with a five-speed sequential torque converter and a Fox suspension all ’round.


What’s it worth? Lots, is all a crew member would say. 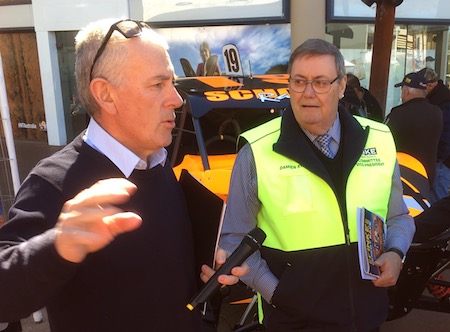