Scotty McConnell is clear where the new Mereenie Loop Road must lead: to sustained employment for the people in that corner of his sprawling electorate of Stuart.

But he is far from dogmatic about how this should happen. He’s offering his multitude of ideas as food for thought: “Does the wider community or the industry support these things – I don’t know. I’m just engaging in a conversation.”

He says Hermannsburg’s Historical Precinct (below right) is the “keystone attraction in that region. I commend Finke River Mission for the work they are doing operating that precinct and the commitment they are showing to it.”

The precinct and the nearby Palm Valley (above right) provide natural links between Aboriginal inclination towards some occupations and the tourism industry.

He says many local Aboriginal people aspire to become rangers but he acknowledges that this is limited by how many positions are needed.

But there is also much interest in interpreting work, which could be extended to its widest sense, “being the tour guide who talks about his own country”. And the potential for these jobs is practically unlimited.

After a history with the German Lutheran mission of 140 years “Aboriginal people there can play a role in interpreting that site, from a first person perspective. Wouldn’t that be amazing?”

Mr McConnell (pictured) says Palm Valley is accessed by a very rough road, made up of sand, river pebbles and bed rock, through the Finke River: “It is impracticable to maintain it in any way or turn it into a high volume public road.”

He suggests for people who don’t have heavy 4WDs, guided day tours to Palm Valley in purpose built vehicles could be run from the Hermannsburg precinct.

This could be done with Indigenous members of the community “whose country it is. That’s what visitors are really looking for.”

It’s currently being done from Alice Springs but running tours from Hermannsburg could cut out three hours of driving. It would be an opportunity for existing operators, including budding Indigenous ones, working together “rather than starting from scratch”.

Should there be a new large caravan park in Hermannsburg, as proposed by the NT Government?

“If a development, private money or public money or a mix of both, doesn’t benefit the local people and their employment I would really question its value. That is a must. Is it realistic? Is the employment sustainable?” 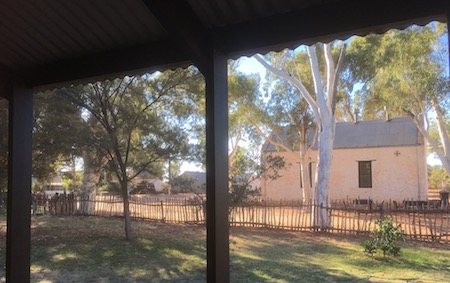 NEWS: Present indications do not suggest it. Is there the manpower in Hermannsburg willing to engage in sustained employment?

NEWS: So why are they not engaged to a larger extent in the Aboriginal owned Top Shop and its string of enterprises nor at the historical precinct?

McCONNELL: We have a convenient jump-to that is used all too often, saying Aboriginal people just don’t want to work. I fundamentally dismiss that, especially as a person with a background of working in stock camps, when I was a kid. These camps were entirely operated by Indigenous people. Today we’ve made the work environment far too complex.

He says many people from places such as Hermannsburg who are looking for work are moving to Alice Springs. One blockage are the incessant meetings on communities, held during work hours to suit visiting bureaucrats and NGOs. Shops and clinics are not open after work hours. There are also family and cultural commitments.

McCONNELL: Some say the answer is for people to work fewer hours. I don’t agree. If you want to be in a work environment you have to work 30 hours a week or more or the income wouldn’t be worth-while.

Mr McConnell says more services are needed on the Loop Road. Travellers need to be confident they can get fuel, clean ablution facilities and basic supplies, drinks and food, “like the BP in Tennant Creek”.

“The Top Shop could do this but I don’t want to pick sides.”

Amazingly, Mr McConnell, the local Member of Parliament, has not yet been shown the government commissioned report about the proposed $6.5m caravan park. He has been given little opportunity to have a role in its preparation. The government engaged interstate consultants, Simon McArthur and Associates, to prepare the report.

“I would like to see the financial modelling that such a facility works,” he says.

“I’m much more motivated by a strategy of numerous small enterprises than big, high-cost infrastructure projects.

“I’ve been very concerned about these consultants and whether the consultation has been adequate and diverse enough.” 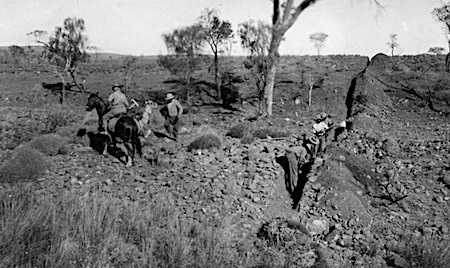 He says there have been other reports, including for a “signature lodge” in the gas Palm Valley fields and a new camp ground just outside Ormiston Gorge, that have come to nothing.

“That can sap people’s enthusiasm. Better build on projects already in place, such as concessionaires on the Larapinta Trail.”

Mr McConnell says the failure to make the six kilometer access road to Gosse Bluff suitable for conventional vehicles is a “glaring omission”.

He says much more should be made of existing functions and he deplores that the “significant event” of the precinct’s 140th birthday last weekend was virtually ignored.

The annual Korparilya Day horse race weekend, commemorating the saving of Hermannsburg with a hand-dug pipeline (monochrome photos by PETER LATZ)  from a well during a prolonged drought in the 1930s, could be turned into a major festival.

It includes a church service and a dress-up ball where locals, including kids, appear in cowboy garb with “hats, boot, chaps and spurs”.

He says: “Community based events can become tourist attractions, such as the Yuendumu Sports Day, the Bush Olympics, used to be.

“These incredible athletes we have here, who play AFL on dirt, often with no shoes.

“We have lots of AFL supporters around the nation. Could that be a tourist attraction? I think we should have that conversation.”

Many communities could have their “bespoke” events but these should be allowed to “grow organically”.

He says the magnificent East MacDonnells make sure that people who come here for “the big blue skies, dirt roads and informal camping type of experience” are not missing out. 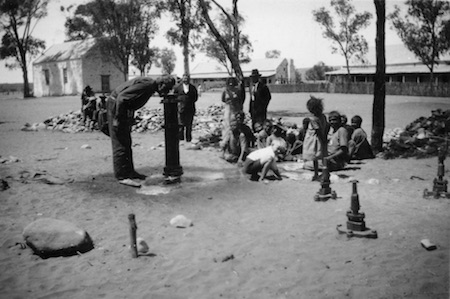 Trephina and Ndhala Gorges, the historic Arltunga mining town, and “of course Ruby Gap,” the pinnacle of hard-to-get-to natural wonders, make sure of that.

“And there are Chamber’s Pillar and Rainbow Valley.

“They are all very low volume, all dirt road incredible experiences, through the back way via Ambalindum cattle station, the Arltunga Loop Road or the Gardens Road,” he says.

“We still do have that full-on outback experience.”