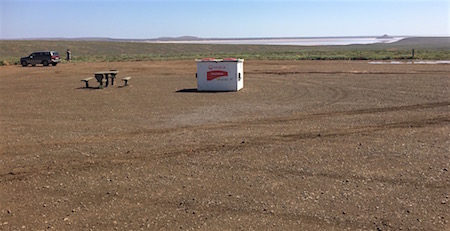 “Further development of the Explorers Way as an iconic Australian tourism experience,  which would have a firm connection to the Territory’s $100m Iconic National  Indigenous Art Trail initiative, including a National Indigenous Art Gallery project in Alice Springs.”

Sounds great but what does it mean in detail?

It’s one of the five priorities set down in the “historic” joint meeting in Alice Springs of the South Australian and Northern Territory government cabinets last week for the first year of their agreement. In terms of word count it is the most detailed.

But to find out what it is all about turned into a mission impossible. In fact a private IT entrepreneur in Alice Springs, Edan Baxter (at right), seems to have a more developed concept on the idea than either government.

We sent emails to tourism ministers Lauren Moss (NT) and Leon Bignell (SA), asking: “In what way is the Stuart Highway a tourist attraction in its own right, and how it could be developed further?

“We are especially interested in the possibility of acquiring land along the highway, say a kilometre wide on each side, so that travellers get the feeling of our much touted wide open spaces, camp and take walks in the bush, instead of driving between two fences.”

A spokesperson for Mr Bignell (at left) said “at this early stage of the process it is not appropriate to comment further at this time”.

He is currently presiding over the most pathetic public facilities serving his section of the Stuart Highway running through some of the world’s most fascinating country, because of its sheer size and openness: Stop for a scenic view and be confronted by human faeces and toilet paper strewn about.

Ms Moss (at right), for her part, had nothing to add to an election undertaking by then Opposition Leader Michael Gunner in February last year, saying Labor will “develop a significant Indigenous Arts Trail right across the Territory [working with] the people of Tennant Creek, Katherine and East Arnhem Land to ensure those communities are properly linked to this trail.

“These projects will be linked and form an Indigenous Art Trail across the Territory.

“We will have a grants program that will allow art galleries in communities to upgrade their facilities, their back of house production areas, put in dining areas and cafés and improve their displays.”

Meanwhile Mr Baxter says he is developing GPS triggered trails around NT and SA, providing information for self drive tourists.

He is calling for local businesses and operators to collaborate and “add more depth and interactive experience to their destinations”.

PHOTO at top: Typical of most rest areas on South Australia’s Stuart Highway: mostly no dunnies, no shade, toilet paper strewn about. In the distance shimmering salt lakes in the wide open spaces north of Port Augusta, the kind of scene visitors – especially from overseas – come to see.