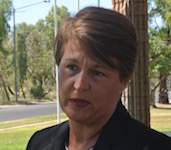 A group opposed to fracking has suggested a company appointed to advise the NT Government’s hydraulic fracturing inquiry may be compromised because it has clients in the oil and gas sector, but Justice Rachel Pepper (at right), who heads up the enquiry, is rejecting that.

Naomi Hogan (above left), of Lock the Gate, says ACIL Allen Consulting, which was appointed to provide advice on economic issues, has “a long list of mining and gas companies for clients, including Jemena, a key advocate of fracking in the Territory.

“ACIL is no innocent economic bystander – they have a history of aggressive economic claims to push the gas fracking industry.”

But Justice Pepper says the tender process was a public one: “From those that submitted a tender, ACIL was awarded the economic tender, following a rigorous assessment process. Tenders were assessed against current Northern Territory Government procurement processes, which included oversight by an independent probity advisory.”

Justice Pepper says she was a member of the tender assessment panel: “Assessment was made using criteria of price, local content, capacity, timeliness, scope specific as well as past performance, all of which were outlined in the public tender document that was released.”

But Ms Hogan says most recently, fracking giant Santos used ACIL “to push through the economic rationale for their 850 well coal seam gas project in NSW.

“An assessment of their modelling reveals that ACIL ignored financial and environmental costs to exaggerate the economic value of their client’s project.

She also quotes Rod Campbell, Research Director of the Australia Institute, as saying “ACIL has a track record of overstating expected tax revenues of their client’s projects.

“In 2015 ACIL estimated Chevron’s gas projects would generate tax revenues of $355b. Chevron now says it will pay between $60 and $140b, but will not begin paying for decades.

“If Territorians are going to have any faith in this economic analysis then the fracking inquiry must ensure there is a transparent process around this report. There must be a multi-stakeholder panel that oversees the economic modelling assumptions that ACIL use.

“Without this oversight the fox is guarding the henhouse of the NT’s gas and water resources.”

“In accordance with the tender document, the inquiry must approve the assumptions made by ACIL before they commence any economic modelling.

“The inquiry will also have an ongoing oversight role of ACIL’s work. This oversight ensures ACIL are accountable to the independent inquiry throughout its process, from the development of assumptions, to delivery of the final economic assessment report.

“The ACIL economic assessment report will be published in full upon its completion,” says Justice Pepper.