NT Writers Festival salutes the 'lifelines that join and cross' 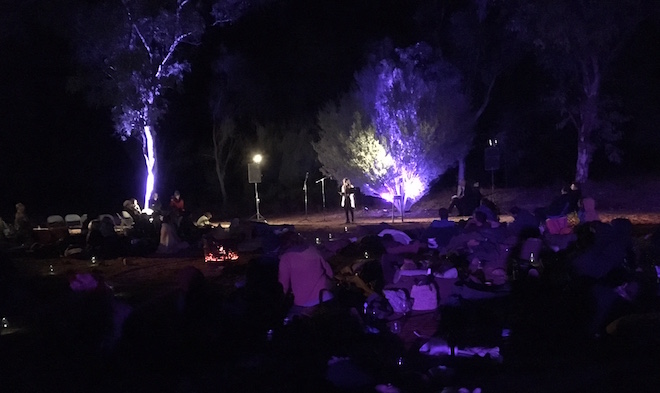 “This is what the world aspires to have,” said Abe Nouk, the tall, lanky, Sudanese-born, now Australian spoken word artist as he took to the stage last Friday night, the final act of a poetic picnic hosted by the NT Writers Festival in the grounds of the Olive Pink Botanic Garden.

He didn’t define it, but everyone present knew what he was referring to. It was everything people had said through the course of the evening, all the ways they had made connections with one another, across cultures, across languages, across all of the inevitable and often wonderful differences between individuals.

It was the beauty and peace of the cool May night in the garden. It was the care with which the picnic ground had been laid out, a welcoming circle, with its open paths through to the centre from north, south, east and west, symbolically drawing together people from near and far – “a fine web of families”, as MC Craig San Roque  put it. Taking up the festival’s theme he dedicated the evening to “the roads that cross, some of us who have been lost and the lifelines that join and cross and keep us woven together”.

It was the fires burning around the edges of the circle for warmth. Now a fire was lit ceremonially at the centre, and water poured into the earth alongside it as the heart-lifting music of two violins began to be heard, the minstrels making their way through the circle.

It was the earth itself, here in Mparntwe, Arrernte country, and the generous embrace of elder Margaret Kemarre Turner OAM, read by her daughter Amelia, following her greeting in Arrernte:

“Two cultures can hold each other. I think that white people, their language is a loveable language, and that loveable language fits in their culture, how they run it, how they live with it, how they get on. Well, our language, our anpernirrentye, our culture’s like that too. So I’ve been thinking, let’s get together, every one of us, and hold these two languages and things together. And teach them, and teach each other.

“We cannot have blaming business today now. We cannot do that because we are living together. We are eating the same food, we are drinking the same water, we breathe the same air, alakenhe. The land can’t support us like it used to, and there’s not much bush tucker any more. But today we buy vegetables to make up for that. Two cultures can hold each other very strong.” 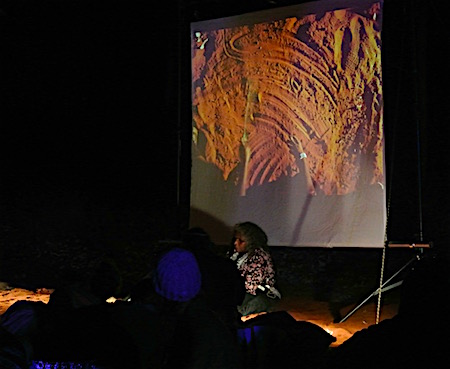 It was the fact of these words being spoken in the context of a festival program that took its bi-lingual title to heart and honoured its aspiration: where Arrernte knowledge and creativity would be celebrated – the launch of Therese Ryder’s book about birds, the talks along the river by Veronica Dobson and Pat Ansell-Dodds, paired with talks by non-Arrernte locals Alex Nelson and Fiona Walsh; where cross-cultural relationships would be honoured – in conversations across the program but specifically in a session on the writing and work of collaborators Veronica Dobson and Fiona Walsh, hosted by Aboriginal scholar Josie Douglas, and in the launch of the poetry collection by Penny Drysdale, who works closely with Arrernte families and was strongly supported at the launch by their elders, including MK and Amelia Turner.

It was the health of this foundation, allowing the festival to then reach out and draw so many others around the fire.

An audience that may not have included a single other Ngaatjatjarra speaker was enthralled as Lizzie Marrkilyi Ellis told a story in that Western Desert language, using a story wire to mark its beat in the sand, her hand to trace its action and her voice to cast its spell, all this miked up and projected on to a large screen to carry what would have been traditionally a quite intimate experience.

Local poet Leni Shilton took us out west also, reading from her verse novel “Giving Voice to Silence”, about the experience of Bertha Strehlow miscarrying in the desert – “bleeding life” – and how she was saved by Aboriginal women and their traditional ministrations.

Queensland poet Anthony Lawrence took us to sea on a prawn fishing trawler, reading from a verse novel written in rhyming six line stanzas that nonetheless captured the tough vernacular of such a life.

Agustinas Wibowo meditated on the borders that carve up our world – particularly in Central Asia, a “paradise for border-lovers” – and that also occupy our minds, preventing us from seeing each other for who we are. He introduced himself first in Indonesian, one of the many languages spoken by this adventurous traveller of Chinese heritage.

Honouring the multilingualism of the festival, and the linguistic diversity of our own town, we heard Urdu at the opening of the next presentation, spoken by Farida Khawaja, who works as a doctor at the Alice Springs Hospital. She then incarnated as Electra, in a text written by Craig San Roque after Aeschylus, telling the story of the first jury and the renunciation of cycles of bloody revenge. 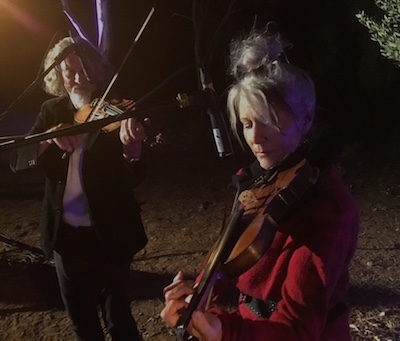 Michelle Cahill followed, a Kenyan-born poet of Indian descent, who grew up in the UK and US before eventually migrating to Australia. Responding to the northern hemisphere ambience of the violins, she transported us first to bleak fishing ports of Scotland and the harsh women’s work of filleting herring, with her beautifully imaged poem “The Herring Lass”, and then on other journeys of great imaginative and geographic sweep.

And finally Abe Nouk, who eloquently, with humour and a rhetorical flourish and rhythm that came in part from him speaking in English as a second language, drew the threads of this fine web together.

“This is what everybody wants,” he said.

It’s not for nothing that Nouk is described as a spoken word artist. It’s impossible to set down on the page the full allure of what he had to say, the skilful way he alternated between humour and gravity, light and dark.

He told a very funny story about getting his Australian passport, then finally his mother handing it to him, with a deceptively simple comment: “You live in the only country where your only morning concern is the sound of your alarm clock.”

In the slight pause that followed we could imagine all that stood behind that comment from a woman who had fled her war-torn country, a widow with eight children, and had the million to one chance of resettlement in peaceful, affluent Australia, a woman whom her son described as a philosopher, despite having no formal education:

“A woman of active imagination deprived of reading books. Mum and the women of her generation were excluded from schools because they were too focussed on survival. If only she had two of life’s precious tools, the ability to read and write.”

“Are you aware of your freedom?” he asked.

He declaimed a poem that he’d written out of conversations with her that acknowledged his ignorance of Indigenous languages and traditions, contemporary Indigenous life – “I’m sorry”, “my shame”.

He  vowed to correct that, because “we stand on the land of whose ancestors we now have to uphold” – “that’s what Mum tells me and all my siblings.”

He spoke movingly of his father – “not the most educated man but every choice he made kept my family alive. To me he was wise … he knew the basics of life. An honest man really has nothing to fear.”

“I stand before you,” he said, “a representation from the vision of both illiterate parents who had no chance in the world yet consistently imagined a future for their children.

“This moment right here is freedom, we’ve got to make it count for something, anything.”

One way to do that is through sharing stories, he proposed. His own  allowed us to understand something of “what it means to change someone’s life” and at the same time what it is to be always “a stranger in somebody else’s home, in somebody else’s land”.

With the philosophical acceptance arising from deep acquaintance with stark choices, “It’s all good,” he said, “the stigma of being refugees is something we are branded with but it’s better living with a stigma than not living at all”.

Still, he doesn’t take anything for granted: living in this country, even after 13 years, “feels like a promise waiting to be broken”.

In face of that doubt, he places his faith in the “circles and cycles of story-telling” that connect us as “inheritors of our ancestors’ voices”:

“Maybe we can write our futures.”


This event, “Crosslines – stories crossing the heart of the country”, was created by Dani Powell, festival director, with Craig San Roque.  Production by Robbie Hoad, Kristy Schubert and Matt Woodham.