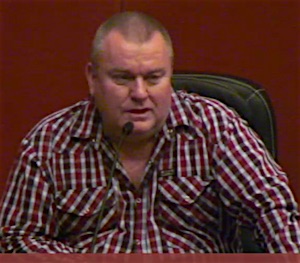 While Derek Tasker (left), training officer at the Alice Springs Juvenile Detention Centre, continued his appearance before the Royal Commission this morning, Minister for Territory Families Dale Wakefield issued a media release about the training of new youth justice officers.

Mr Tasker had stressed over and over again that the only training he and his colleagues had received was PART (Professional Assault Resistance Training) and senior First Aid. This was his answer to many challenges presented to him about the adequacy of his repose in given situations: he was doing what his training (PART) had taught him to do.

It was therefore troubling that he remained in the position of training officer for new recruits. Would this continue? the Alice Springs News Online asked the Department of Territory Families.

To be clear: Mr Tasker was asked yesterday about his current position by Counsel Assisting the Commission, Peter Callaghan SC :

“You are currently the training officer at the Alice Springs Youth Detention Centre? That’s correct.

“And it is the latest in a long series of positions you have held within the youth detention system in the Northern Territory; is that right? That’s correct.”

Well, that is not how the department sees it. Late this afternoon, the News was informed that “Mr Tasker does not hold a training position within Territory Families and is not involved in the delivery of any current training programs.

“Mr Tasker has not delivered training within the [Alice Springs] detention centre since August 2016.”

Mr Tasker was followed into the stand by Barrie Clee, a shift supervisor at Don Dale and in 2009, Officer In Charge at Aranda House in Alice Springs. At that time Mr Clee was the only permanent staff member. All other positions were filled by casuals. This was still the case in the period 2013-15.

There were attempts to offer casual staff basic PART training (three days) and First Aid, but it could be the case that there were staff on roster without any training. (Mr Clee also referred to efforts to give staff one day’s training in “cultural competency”.) 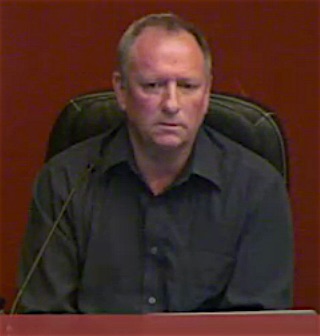 The Don Dale centre in Darwin had a permanent workforce at the time, said Mr Clee (right), but Alice Springs did not. There was no approved “permanent staffing model” for Alice Springs. His evidence related to the period 2013-15.

Programs for detainees will include “life skills, training, education and personal development”.

Eleven of the new recruits are female (the highest ever intake); six will be allocated to Alice Springs, five to Darwin.

Yesterday Mr Tasker told the commission that only one female youth justice officer was working at present at the ASYDC.

The new recruits also include 12 who are Indigenous.

Part of the training is facilitated by the Australian Childhood Foundation, teaching recruits about the impact of trauma on young people and how it can affect their brain development and behaviour. This will enable officers to provide more meaningful responses to detainees’ behaviour, to better support rehabilitation and ultimately stop reoffending, said Ms Wakefield.

When young offenders leave detention they will continue to receive supervision from 52 new Youth Diversion workers, part of the overhaul of the youth justice system announced last month.

The changes cannot come soon enough. The overwhelming impression left by Mr Tasker’s and Mr Clee’s evidence and their answers to cross-examination has been of a shambolic system. Problems have included:

• poorly trained staff, including in positions of responsibility such as their own.

For example, Commissioner Margaret White asked Mr Clee about information provided to YJos to help them recognise mental illness and cognitive deficits that young detainees were more than likely to have. Short answer, no.

Said Mr Clee: “We didn’t know what we were doing with some of these children that came in, we had no idea, we were not informed about behaviours they could display, if they had any disabilities in any way.”

Peter Callaghan SC commented that Mr Tasker appeared to have no clear knowledge of relevant policies and procedures (though acknowledged in fairness that Mr Tasker had rejected that). He asked Mr Clee whether he had concerns about Mr Tasker’s capacity to train staff at the time of his appointment to the training role. Mr Clee said he didn’t.

Given the reliance in Alice Springs on casual staff, this would not have been helped by staff encountering shocking delays in payment, according to Mr Clee. He recalled that one man, who was good in the role, waited eight weeks to be paid, then quit; another, who remains in the system, at one stage went unpaid for 11 weeks.

Staff shortage could also lead to lockdown of detainees: if a child had a family visit or a visit from their lawyer, depending on staff available, the others would be locked down.

Mr Clee gave evidence of trying to raise and resolve staffing issues on numerous occasions with management, to the point of feeling that he was “beating his head against a brick wall”

For example, there were no clear protocols around notifying in advance detainees or their families that the detainee was to be transferred from Alice Springs to Darwin. Mr Tasker claimed he would “put the option out there” for a voluntary transfer, but otherwise it was out of his hands.

In admitting detainees to the centre , Mr Tasker relied on a booklet.  What happened with detainees who did not read or speak English well? He said he would use other detainees to explain to them, or even allow them a phone call to family members. It was not clear how the family members may have been able to help.

Perhaps more concerning is that the booklet, in use from 2012 to 2016, contained this paragraph:

“Different officers have different approaches and as a detainee you will need to learn the different ways that officers deal with situations.  This will help you predict what will happen to you if you behave poorly.”

Detainees were literally being warned to expect  unpredictability. Was that appropriate for a child entering detention?

Mr Tasker replied, “I wasn’t the one that actually actioned this booklet, that was done in Darwin.”

• failure to follow-up,. We’ve heard of the unanswered complaints of detainees, but this applied even to their own decisions.

For example, while Mr Tasker was acting OIC at Aranda House he made a decision, minuted in a staff meeting and referred to in other documents, that shade cloth over the courtyard would be retracted to allow the warmth of the sun to penetrate during the cooler months. The courtyard was where detainees would be visited by their families. It was also where professional visits could be conducted.

Mr Tasker had no recall of this decision, but in any case it was never actioned.

• poor standard of infrastructure and over-crowding.

Over-crowding could lead to detainees being transferred to Darwin, which Mr Clee described as “common”. It reverted Alice Springs back to a holding centre model, when all detainees were sent to Darwin, which had been, in principle, abandoned in 2011.

There was other evidence from both officers of Aranda House being used as an overflow fallback, and in particular at one time as the accommodation for the highest classification detainees – in other words, the worst facility for the young people who were the most difficult to manage.

Mr Tasker was also cross-examined by counsel for various “vulnerable witnesses” on his alleged grabbing of the detainees by the neck, lifting them up and thrusting them against a wall. There are three such allegations, one of them by Jamal Turner who gave evidence on Monday. Mr Tasker strongly denied all of them and pointed out that for the one brought to court by Dylan Voller, he had been found “not guilty” in the Lower and Supreme Courts.


He also refuted allegations that denial of access to toilets and drinking water was ever used as a punishment.

Facebook
Twitter
Pinterest
WhatsApp
Previous articleHow did a ‘loose cannon’ get his youth worker job back?
Next articleSalt mine: Alice needs to grasp a major opportunity