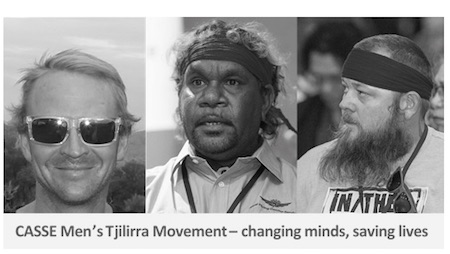 A contingent of Central Australians is heading to Melbourne as guests of a national symposium aiming to generate new discussion and thinking around Aboriginal recognition and constitutional change.

Hosted by not-for-profit organisation CASSE (Creating A Safe Supportive Environment) the day-long symposium on 25 March is titled “The Day After Tomorrow”. Featuring Senator Patrick Dodson, it will provide a forum for all attendees to contribute to the national conversation around  “breakthrough recognition”.

Also travelling are the leaders – Martin Jugadai, Jamie Millier Tjupurrula and Nathan Brown – of the Men’s Tjilirra Movement (MTM), a collaboration between CASSE and the Royal Flying Doctor Service.

Mr Jugadai is a Ngangkari, a traditionally trained healer. In a recent report for Living Black on NITV, Ryan Liddle said of Mr Jugadai’s work with MTM: “It’s probably safe to say that most Ngangkaris weren’t taught how to save culture or language per se, but that’s exactly what Mr Jugadai has sought to do…”

The symposium will hear also from Dr Craig San Roque, a Jungian analyst and psychotherapist, based in Alice Springs, who has been involved in Indigenous mental health services since 1992; and from Alice Springs journalist and author of the book Trouble: On Trial in Central Australia,  Kieran Finnane.

CASSE’s Aboriginal Australian Relations Program, which works on violence and trauma with Aboriginal organisations and people in Central Australia,  is headed up Pamela Nathan, a forensic and clinical psychologist and psychoanalytic psychotherapist.

Says Ms Nathan: “Central Australia is the invisible heart of Australia – it is lacerated by the racial divide, which blankets silent suffering and bleeding trauma trails, yet there is also some amazing work being done that centres on the concept of psychological recognition.

“In the debate about constitutional recognition and change, the term ‘recognition’ has become highly politicised and polarising.

“We have lost sight of what it means to be recognised. Recognition entails being able to see and know, and to be seen and known. It entails very real life and death struggles.

“If we are not seen, we are a nobody. A lack of recognition heralds a ‘nobody’s land state of Terra Nullius’ and a nobody state of mind becomes sovereign. Everyone’s birthright is to be recognised.”

Pat Anderson AO, Alyawarre woman and co-chair of the Referendum Council, speaking at a meeting in Darwin, echoed these thoughts: “We’re not recognised, that’s the problem, Aboriginal and Torres Strait Islander people are almost invisible.”

CASSE’s ground-breaking community psychoanalytic approach to Aboriginal mental health, which builds on the foundation of recognition, is achieving positive outcomes. The Men’s Tjilirra Movement in the central western desert region of Australia is empowering men and communities to reconnect with their cultural practices in order to reconnect with each other.

The men’s “Breakthrough Violence” program, co-run by Ken Lechleitner in Alice Springs, operates with a similar approach, focussing on the recognition of mental states in the context of secure, attachment relationships.

Both offer valuable lessons on the power of psychological recognition to transform lives.

CASSE will be drawing on the symposium presentations and discussions to develop a document outlining key issues in relation to recognition, with the aim of presenting this document to leaders at the National Indigenous Constitutional Convention.

Full details of the Symposium are available here.

Note:  The Central Land Council is organising a First Nations Regional Dialogue at Ross River on  31 March – 2 April.  This is one of 12 meetings across the country to debate what the referendum question on the constitutional recognition of Indigenous people should cover.

Each regional dialogue meeting will be asked to send five participants to the national convention at Uluru in April 2017, which will consider the referendum proposal and seek consensus on the question to be put to all Australian voters.

In September 2013 CASSE and Congress hosted a public forum in Alice Springs to discuss family violence. Here is the link to the widely-shared Alice Springs News Online report of the discussion: Aboriginal men ‘need to reinvent’ themselves: forum