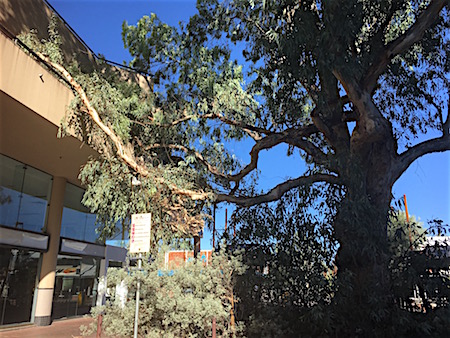 A loud crash startled walkers in the Mall and patrons at Sporties at 4:25pm on Sunday. They found two heavy branches had broken away from the trunk of the most famous and oldest gumtree in town, sacred to local Aborigines, in Parsons Street, just a few metres from the intersection with the mall.

The branches were still wedged in the tree but their outer ends had crashed onto the railing of the balcony of the Alice Plaza shopping centre.

Had they fallen to the ground they may have killed a women who was walking beneath them at the moment they broke off.

It’s not the first that time the tree was the cause of a near disaster: Some years ago, a big branch fell on well-known athlete Noel Harris but he escaped major injury.

Councillor Steve Brown, the chairman of the town council’s parks committee, says “sooner or later someone will be killed” but urgent lopping of the old gum, which he had urged to be done on several occasions is running into red tape: Approval from the Aboriginal Areas Protection Authority (AAPA) has to be sought before it’s done.

“There should not be that kind of bureaucratic obstacle,” says Cr Brown. “This absurdity has gone on for long enough.”

The council should have the power to make decisions about lopping sacred trees in its own right, with advice from an arborist.

The Alice Springs News Online is seeking comment from the AAPA. Last time we did, in November last year, in connection with sacred tree on the Melanka block, the AAPA did not respond to our request.

The Town Council announced today that it will begin discussions with the Aboriginal Areas Protection Authority regarding any further action that may be required.