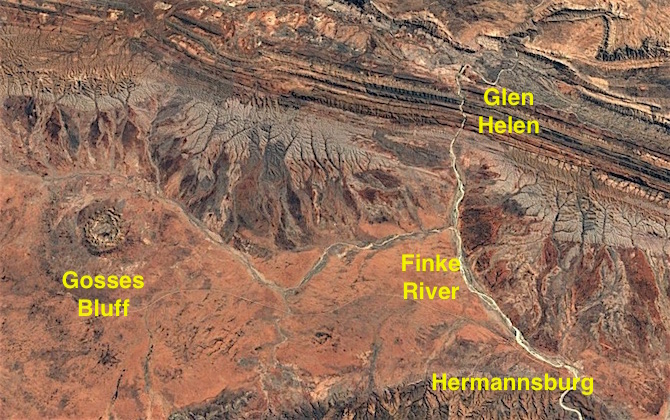 2017 will kick off with an event likely to revolutionise The Centre’s tourism industry – the opening of the long awaited seal of the Inner Mereenie Loop.

Thousands of grey nomads will have a superb new place to play.

People in the most ordinary 2WD cars will be able to drive from Alice to Alice via the iconic Aboriginal township of Ntaria (Hermannsburg), the Gosses Bluff meteorite crater, Glen Helen and back via the breathtaking West MacDonnells – all the way on bitumen, around 400 kilometres, and not a single traffic light.

They will be crossing twice the Hugh River and the mighty Finke, the oldest river in the world. There are side roads to our gems including Redbank Gorge, Ormiston, Ellery Bighole and Standley Chasm – enough for a couple of weeks in some of the world’s least polluted country.

The Mereenie Loop was initially intended as leading to Uluru but the alternative route under construction now is a boon for the Alice-based tourism industry, long struggling against the competition from the Ayers Rock Resort.

Government money for the Inner Loop had been moved from Budget to Budget for some years.

According to a spokeswoman for the Department of Infrastructure, the project is worth $28.3m.  $25m was allocated in 2015-16 and in 2016-17 an additional $3.3m program increase was approved, funded through the Australian Government Asset Recycling Initiative.

The works were awarded as a “managing contractor” deal to local company Sitzler in December 2015 which included all planning and design and construction works.

Actual construction started in September this year and the first 20 kms are scheduled for completion this month.

The remaining 20 kms are to be sealed, line marked and completed by end of February 2017. All works are expected to be complete and open to the public by end March 2017.

The 40km road from Hermannsburg to Glen Helen is being built by Black Cat,  Exact Mining Services and Ostojic.