Above: Pine Gap (a photograph of the Centre of Australia) by Kristian Laemmle-Ruff.

Sometimes it can  take a stranger within our midst to refocus our attention on that banal evil from which it never should have strayed.

We, residents of Alice Springs, live good neighbour-fashion – minding our own business, eyes averted, no questions asked – alongside the Pine Gap military and spy base, which provides “targeting data … used for drone killings both in war zones in Afghanistan and Iraq and in countries with which Australia is not at war, such as Pakistan, Somalia and Yemen”. 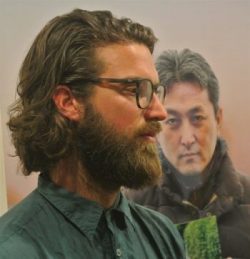 These are the words of Professor Richard Tanter from Melbourne University and the Nautilus Institute. He’ll soon be giving the keynote address at the annual conference of the Independent and Peaceful Australia Network (IPAN) that this year is being held in Alice Springs and is focussed on Pine Gap, under the heading Secrets in the Centre.

But he is not the particular stranger I write of. Rather it is the artist whose exhibition, Mind the Gap, is showing at Watch This Space – Kristian Laemmle-Ruff (left, photo by Erwin Chlanda, the artist’s Generation #2 in the background). I will come back to him, but first want to recall some of his honourable predecessors –  other strangers in our midst.

The last time that the military role of Pine Gap received any vigorous local attention was when Donna Mulhearn, Bryan Law, Adele Goldie and Jim Dowling, of Christians Against All Terrorism, carried out their “Citizens’ Inspection” of the base. Wanting to protest against the war in Iraq, in which they believed Pine Gap was playing a significant role, they cut a perimeter fence, climbed onto the roof of a building, unfurled banners and took photos (including the one below right). That was in December 2005.

The Alice Springs News – then still a print weekly – was one of only two Australian newspapers, of the 18 to which the photos were sent,  that stood up to threats of prosecution and immediately published the images. The other was The Canberra Times. 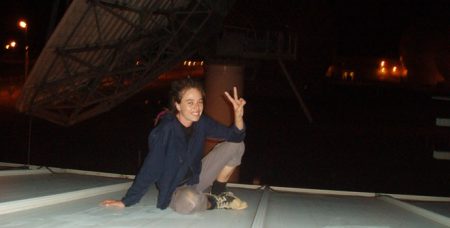 We should not forget the price paid by the activists: protracted legal proceedings followed, with the possibility of serious gaol time hanging over their heads. (The law used to prosecute them  – ultimately unsuccessfully – was later strengthened but to date seems not to have been tested in the courts.)

For all the activists’ courage, however – and the steady work of the Nautilus Institute as well as the revelations made by Edward Snowden – military operations at the base have not only continued but expanded. Their high-tech nature should not obscure their real world impacts.

People die violent deaths as a result of the activities at Pine Gap. Some, unintended victims, are referred to by what really is an obscene term – “collateral damage”. How many we don’t know, but there is innocent blood on hands at Pine Gap and, in consequence, on our own hands as citizens of the town that so obligingly hosts this military base and its personnel. (The majority, 70%,  of the 800 staff are not employees of either the US or Australian governments, but contractors for private corporations like Raytheon, Boeing, Northrop Grumman and General Dynamics, as well as major computer companies like IBM and Hewlett-Packard.)

Its role in drone warfare has become the most pressing moral question raised by the presence of Pine Gap on Australian soil. There are others: its potential threat to Australia’s security (not to mention this region’s), its potential to destabilise our international relations, its role in mass surveillance, the way it compromises Australia’s integrity and independence, the list could go on. 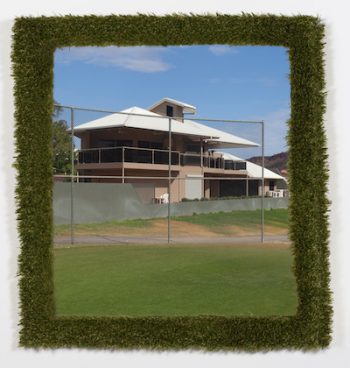 But what, here in Alice Springs, has been the Pine Gap issue that has recently caused a flurry of attention? Its potential to destabilise the property market with the sell-off of some 400 units of its housing stock.

This is what makes Laemmle-Ruff’s The Golf Course (left) so penetratingly perceptive about the unspoken deal in Alice Springs about hosting Pine Gap. However, it is the signature image of this exhibition, Pine Gap (a photograph of the Centre of Australia), pictured top, that I want to discuss here.

In this image the artist takes on the military base in all its gleaming high-tech impersonality, photographing it in the arriving dawn, just as the light seems to be waking in the ground itself but while the artificial lights are still blazing.

He compresses the passing moment into a single image that emphasises the two orders that we are looking at: everlasting day that follows night, here in this secluded valley as it does beyond the horizon and throughout the natural world, in contrast to the engineered ‘day for night’ of the military installation.

He captures an unsettling beauty. You could almost imagine this as a corporate image for the base –  were they less secretively inclined – a seductive display of technological prowess, exuding an aura of control and power, man over nature, man over any opposing force.

Part of this is achieved by its exceptional digital clarity and Laemmle-Ruff has put this aspect of his art at the service of those who work to break through the veil of secrecy surrounding the activities of the base. This image and others taken at the same time (archived on the Nautilus site and reproduced in the media reporting on the activities of the base) have actually helped Professor Tanter and his colleagues refine their identification of elements in the installation and their sinister purpose.

Here though, as in other art contexts, Laemmle-Ruff exhibits the image with some carefully-considered interventions. (This is his process with all the images in the show; they all bear examination and reflection beyond a first impression.)

Judiciously, he presents the image in an immaculate light-box, adding another layer to the play of light captured in the scene, and in keeping with the high-tech gloss of the base’s surface appearance. The frame for the light-box though is in natural wood. In this way he keeps the aesthetic shifting, like the shifts contained within his image. (Most of the frames in the show add to the meaning of the work.)

Most significant in the Pine Gap image are the bars added to the foreground. This is not an aesthetising gesture, art for an art audience’s sake. On the contrary, it stops an art audience dismissing the photograph as a document, a well-executed piece of visual reportage. It signals that there is something here to linger with and think about.

It emphasises the position of the artist, and compels the viewer to stand alongside him – to enter his process. Fittingly it also references a fence. We can imagine that the artist may have had to get past a fence or two to get to a position from where he could take the photograph, exposing himself to a certain risk. And given that the photo was taken at dawn, he obviously had to make his approach in the dark – none of this was easy. 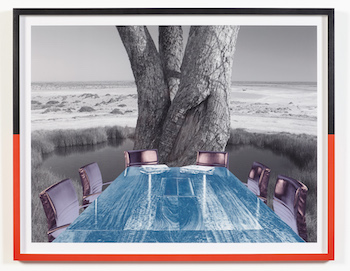 There are other things about the bars – such as the red, white and blue colours of empire that they reflect. (You can see these colours used also in The Conversation and the Cycle, at right, in contrast to the colours of the Aboriginal flag used for the frame – the yellow is visible from the side.)

I had thought about the bars’ uneven spacing as simply the solution to them not being mistaken for an actual structure in the landscape, some kind of lookout up there. But the reference is also to barcodes, that ubiquitous bit of visual patterning that infiltrates even our fruit bowls – a subtle suggestion of the way in which the base is part of a complex that embraces our lives comprehensively.

Pine Gap (a photograph of the Centre of Australia) succeeds as art: it goes beyond the surface appeal of its immaculate execution, standing up to contemplation and reflection. It is multi-layered and at the same time self-contained. It doesn’t need interpretive notes to uncover its core meaning.

It also succeeds as political art, which is particularly challenging. It doesn’t shout at you but rather draws you in to its incontrovertible significance, quietly insistent. You either have to think … or admit that you’ve pulled the shutters down.

I am delighted that the Araluen Arts Centre acquired this image from the Alice Prize exhibition to become part of its permanent collection: for Pine Gap, the military base, is undeniably part of who we are, and I thank the artist for his powerful nudge, waking us from our slumber.

Note: This is a slightly edited version of a speech given on 16 September to open Mind the Gap. The exhibition continues till 1 October.

Professor Tanter will speak about the role of Pine Gap at a public forum at the Chifley Hotel, 6.30 – 8.30 pm, Friday 30 September. His keynote address at the IPAN conference the next day is titled Pine Gap: Serving US Militarism for 50 years – Time for Independence?  For further information go to IPAN.