ABOVE: Mr Dunstan and Bec Horridge are pictured in Hatt Road, leading to Pine Gap, this afternoon. A model of a drone is behind them. Mr Dunstan says he is an itinerant protester and Ms Horridge is from Canberra. They say it’s not a great season for protesting: The usual participants have been “crushed” by neo-liberalism or have turned to climate change. They expect 100 delegates in Alice Springs for the peace conference later this month, and 50 to take part in demonstrations. Will any be trying to breach the fence of the base? “We’ll have to see,” says Ms Horridge. PHOTO below: The illustration in the New York Review of Books story, Xinhua/eyevine/Redux.

The people who are gearing up for anti-Pine Gap protests don’t mince their words: Graeme Dunstan, who describes himself as a long time peace activist, says the up to 500 “spies” at the base are “polite but murderous US citizens in our midst.”

It is clear that we, by being hosts and allies of the US, are complicit in war crimes that Mr Dunstan alleges are being committed.

Asserting that Pine Gap staff are involved in killing by drones of “innocents in far away countries such as Afghanistan, Iraq, Syria, Yemen and Somalia” – a plausible claim – Mr Dustan is calling for the base to be closed, a message to be reinforced by delegates to the Alice Springs Peace Convergence from September 19 to October 2.

The use of drones is the subject of an article by David Cole in the New York Review of Books of August 18, writing about four new books, in an even-handed examination of the issues.

That article raises questions and issues:–

• Given that the definition of murder is the unlawful killing of a person, the relevant facts are: We are killing people – suspected terrorists as well as innocent bystanders – in countries with which we are not at war.

• The demise of these people generates “barely a ripple of attention” in the rest of the world.

• What could make this conduct lawful (and turn the innocent dead into regrettable collateral damage in a just war)?

• Who makes the decision whether we are in a just war or not, and with whom? As it is not a nation, who is the enemy?

• The decision to deploy drones is made by a number of people but the buck stops with US President Barack Obama, about whom Mr Cole writes: “Remote killing outside of war zones, it seems, has become business as usual.

“This is a remarkable development, all the more noteworthy in that it has emerged under Barack Obama, who came to office as an antiwar President, so much so that he may be the only person to win the Nobel Peace Prize based on wishful thinking.

“Our Peace Prize President has now been at war longer than any other American president, and has overseen the use of military force in seven countries —Afghanistan, Iraq, Syria, Pakistan, Libya, Yemen, and Somalia.

“In the latter four countries, virtually all the force has come in the form of unmanned drones executing suspected terrorists said to be linked to al-Qaeda or its ‘associated forces’.” 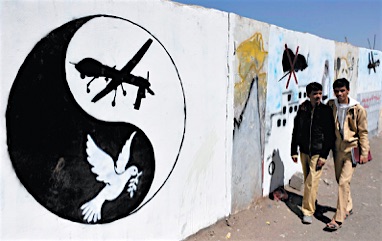 The unmanned killing machines are cheap, in terms of money as well as American lives. This means using them might catch on in other countries, suggests Mr Cole. China is selling drones at a list price of only US$1m.

On the flip side drones are not launched if “the host country is capable of arrest and prosecution” of the targets – but of course Mr Obama has the final word in the assessment of that capability.

Also, the number of drone strikes has been reduced in Mr Obama’s second term of office, although estimates of victims vary widely because of the “difficulty of piecing together evidence after explosions rip bodies apart, the fear of local residents about speaking to outsiders, and the propaganda interests of terrorist groups in exaggerating the number of civilians killed,” writes Mr Cole.

He quotes University of Massachusetts at Dartmouth professor Avery Plaw as arguing “convincingly” that “of the various mechanisms of warfare, drones are the least likely to result in civilian deaths.

“Manned aircraft cannot be nearly as discriminating, because they lack the drone’s ability to hover for hours in order to find a propitious time to strike. And ground troops will almost inevitably do more ‘collateral damage’ than a drone strike.”

But Mr Cole reminds us of the fact that the US has not declared war on any of the countries targeted. And we need to remember that we are in a military alliance with the US, and hosts to their most important overseas bas – Pine Gap.

An unnamed former drone operator is quoted by Mr Cole: “We’re not going after people—we’re going after their phones, in the hopes that the person on the other end of that missile is the bad guy.”

The NYRB piece says on the one hand, “killing off leaders can undermine and demoralize the enemy, and is fair game in an armed conflict … the drone threat has disrupted and altered terrorist operations [keeping terrorists] preoccupied with survival and hindering their ability to move, plan, and carry out operations.

“On the other hand … drone strikes have not thwarted leadership succession, ongoing propaganda operations, or local attacks. And if drones inspire resentment and promote support for our enemies, they may be counterproductive. Most accounts suggest that they do just that.

“In 2012, opinion polls reported that as many as 90% of Pakistanis opposed drone strikes and 74% considered the US an enemy, despite the fact that Pakistan is second only to Afghanistan (and ahead of Israel) in the amount of US foreign aid it receives.”

Mr Cole suggests Mr Obama is loathe to go out on an odious note. On July 1 he released a report on civilian casualties of drone strikes and an executive order that commits to similar reports on an annual basis going forward.

“But he certainly could have been more forthcoming,” writes Mr Cole.

“Why not, for example, present the casualty figures from 2009 to 2015 by year, as he has committed his successors to do, rather than lumping them into one figure?

“Such a breakdown might tell us whether the more restrictive strike policies he announced in April 2013 have made a difference.

“Or why not report casualties on a strike-by-strike basis, as US Central Command sometimes does with respect to civilian casualties in war zones? No explanation was offered.

“In Israel, all targeted killings must be reviewed by the courts after the fact. The European Court of Human Rights is moving in the direction of requiring review of killing even on the battlefield.

“Yet under President Obama, the US has executed thousands of individuals, far from any battlefield, and has yet to offer any specific accounting of the basis for its actions, with the lone exception of the September 2011 killing in Yemen of Anwar al-Awlaki, an American citizen.”

Mr Cole concludes: “When a nation asserts the power to kill specific individuals, outside of war zones, based on their alleged misconduct, it must justify its actions—and must do so publicly.

“Secret executions cannot be squared with the rule of law. They are the stuff of death squads, not democracies.”