Namatjira family: Getting listeners 'through our art' 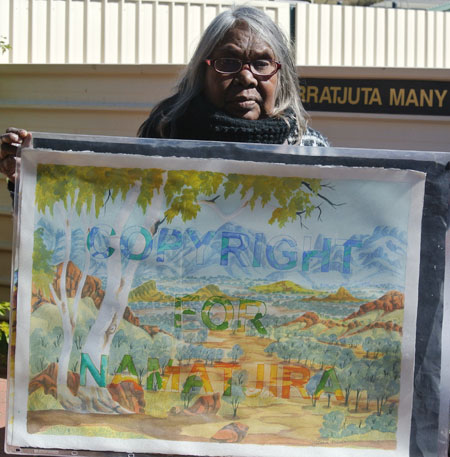 That the descendants of Albert Namatjira have not succeeded in having copyright over his works restored to them still has the capacity to shock, perhaps more especially during NAIDOC week, a time to celebrate Indigenous history, culture and achievement.

At the time of his death the acclaimed Arrernte watercolour artist had an exclusive agreement with the art publisher John Brackenreg (Legend Press), licensing him to reproduce his work in return for a 12% royalty. This agreement persisted after his death, with the family, as the beneficiaries of his will, receiving the royalty. Then in 1983 the Public Trustee, managers of Namatjira’s will and estate, made the extraordinary decision, apparently without consulting the family,  to sell the copyright to Brackenreg for $8500.

Despite periodic public and political pressure for a deal to be done to buy back the copyright, it remains with Brackenreg’s son, Philip. Copyright endures for 70 years after death, so in Albert’s case it lasts until 2029.

The family are determined to keep the issue alive. It became a key focus of the Namatjira Project, a collaboration between the family and Big hART here in The Centre, starting in 2009, the fiftieth anniversary of Albert’s death. Ownership of his legacy is one of the themes treated in the project’s soon-to-be-released documentary, Namatjira. 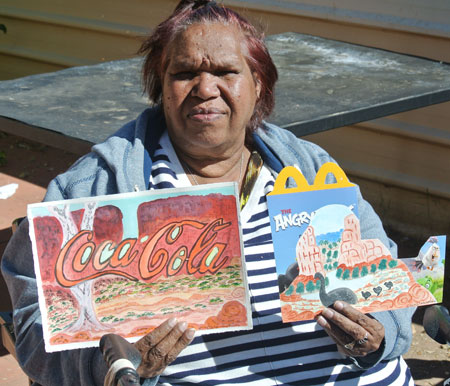 After a recent fruitless visit to Philip Brackenreg in Sydney, senior artist with Iltja Ntjarra Many Hands Art Centre, Gloria Pannka, made the issue the subject of a painting (above right).

‘Copyright for Namatjira’ is spelled out across the surface of a fine West MacDonnell Ranges landscape in the Namatjira tradition. The lettering seems to rise up out of the land, taking on its colours and light, making explicit the inherent connection between the act of painting in country and holding copyright over the image.

Gloria is not alone at Iltja Ntjarra in taking up this direct approach to issues of concern through her art. The approach was stimulated during  recent contact between Iltja Ntjarra and artist Tony Albert, a founding member of the urban Indigenous art collective ProppaNOW and winner of the 2014 national Telstra art award for his politically pointed work, We can be Heroes.

A rash of watercolours confronting issues like homelessness, diabetes, dialysis, and mining have followed. A group of four small works was acquired by the National Gallery of Victoria (NGV), including one by Clara Inkamala which has Coca Cola, in the classic typography of the brand, emblazoned across Ntaripe (Heavitree Gap), the red of the lettering effectively integrating the brand name with the rockface (above left).

“We want to send out [a message] to those people who are selling Coke and Kentucky Fried Chicken to our people. We got so many people in dialysis, with diabetes, heart problem, lung problem and all that, all this grog, they’re selling it. Our people are buying these grogs and these foods.”

Another work, mounted on McDonalds packaging, shows an emu and chicks parading across a picturesque landscape – perhaps Glen Helen (Yapalpe in Arrernte). 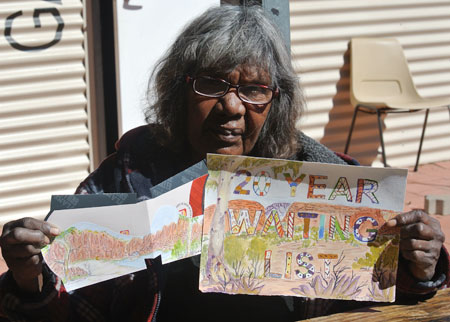 “We want our people to move back to their country, look after it and live in a good environment instead of here in town, just drinking, too many sugar, lollies and all that,” says Clara. “This is telling people we’ve got bush food out there and healthy ones, instead of Kentucky, fish and chips. This is for our kids, we’ve got to try to look after the next generation …”

Lenie Namatjira (right) made access to public housing the subject of her watercolour, another of the four acquired by the NGV. Again the landscape shows Ntaripe, situating the issue here in town. The text reads ‘20 Year Waiting List’, which Lenie says is how long – “more than that” – she has been waiting for a house. Suffering from diabetes, asthma and waiting for a kidney transplant, she lives in someone else’s place, she says, but wants her own “good place to stay”. She would prefer it to be in a town camp than in the suburbs, seeing the camps as more secure, more protected from unwanted guests.

Clara takes up the same theme: “Housing, waiting too long, 20 years for housing. Used to be only six months. Now it’s a long wait, sick people living in camps and all that. Then again when they get houses all the families come in, drinking and all that, spoiling [it] for them sick people.”

Lenie also speaks of her grandfather – Albert – who “never lived in a good house … he was fighting to build a good house but nothing happened”. 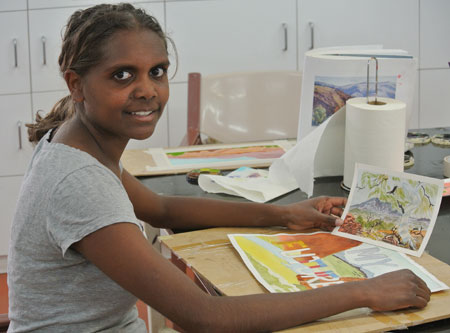 She hopes government will see her painting and “help us”.


“It’s hard to talk to someone to help us, to go up to higher people,” says Clara. “The only way we can do this is through our paintings.”


What’s at stake is articulated by the youngest artist in the studio, Tiara Doolan (at left): “My future.”


Tiara has been painting since last year, learning from her Nannas. She is among a number of emerging artists to join Iltja Ntjarra Many Hands, now incorporated independently from the Ngurratjuta Aboriginal Corporation.

Apart from the NGV acquisition, another recent acknowledgement of the art centre’s depth and legacy is a long-term installation of work representing their home community of Ntaria (Hermannsburg) at the National Museum of Australia. The installation will be in the Landmarks gallery, one of the museum’s five permanent galleries, which tells the stories of 33 places across Australia. 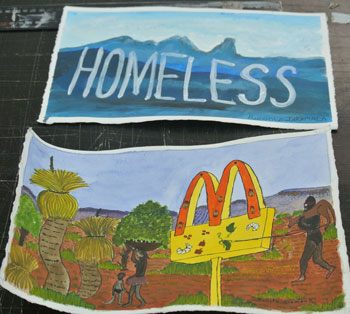 Benita Clements is a younger artist with Iltja Ntjarra who is attracting attention for her figurative painting. Her effective watercolour reclaiming the ‘Golden Arches’ for the healthier bush tucker diet of old is one of the four acquired by the NGV, as is Rienhold Inkamala’s eloquently blue work, treating the theme of homelessness (both pictured at right).