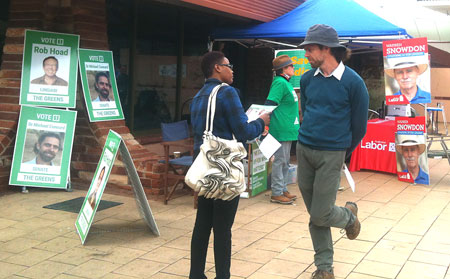 Counting of votes cast in Saturday’s Federal elections has resumed today with interstate, postal and absentee votes, as well as recounts, according to Electoral Commission spokesman Michael Sherry.

However, she is well ahead of Mr Snowdon in the Alice Springs urban booths (see table below), despite his claims to the contrary.

These include all the votes cast in the two weeks leading up to the election, all early votes, all polling day votes and those received by all mobile teams.

It is likely that there will be a significant number of no-shows and informal votes.

PHOTO: Greens Senate candidate Michael Connard has a leg to stand on.